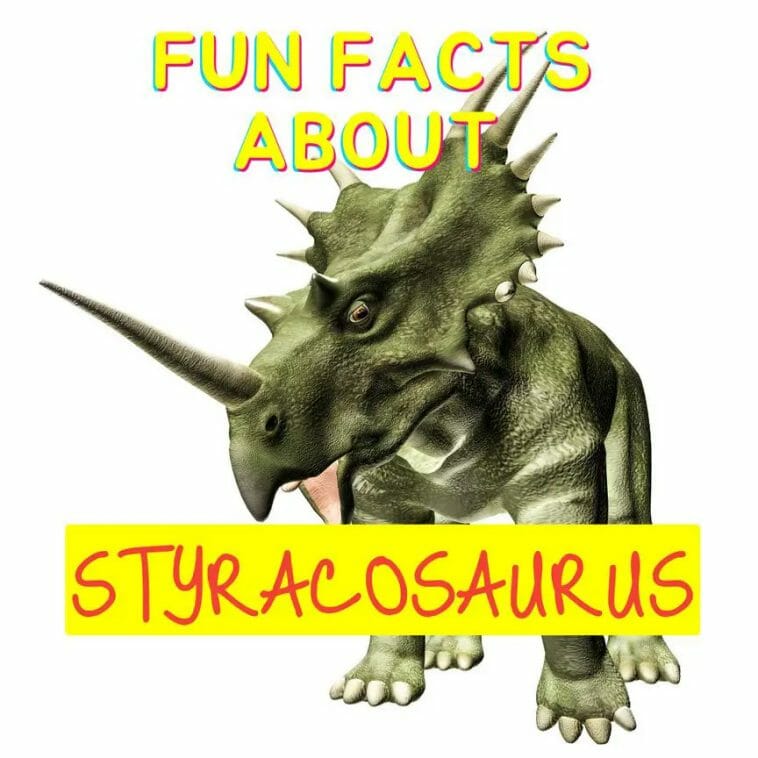 Styracosaurus lived in what is now North America during the Cretaceous Period and had four short legs, a huge bulky body, and a short tail. It possessed a nose with a parrot-like beak, cheeks, and flat teeth, and it ate low-growing plants.

Styracosaurus, like almost of Ceratopia, had a robust neck shield. This species, in contrast to the others, featured six long horn attachments on the upper edge of the shield and much smaller ones on the sides. These characteristics distinguish it from other horned dinosaurs such as Chasmosaurus and Triceratops.

Barnum Brown, a fossil collector, discovered the Styracosaurus fossil in Canada’s Dinosaur Provincial Park in 1915. The majority of the postcranial skeleton was complete, but just a few fragments of the head were retrieved, as Brown later observed in a 1937 study with his colleague Erich Schlaikjer. Brown believed that the few fragments discovered were sufficient to designate a specific species of dinosaur: Styracosaurus parksi. Brown’s new species was the third Styracosaurus species to be named.

Paleontologists Michael J. Ryan, Robert Holmes, and Anthony Russell analysed evidence assigned to Styracosaurus in 2007 to rearrange the dinosaur’s discoveries. In their report, they deemed only two Styracosaurus species to be valid: S. albertensis and S. ovatus. The morphology of the ornamentation on one area of the ruff separated Styracosaurus from other dinosaurs, according to Ryan and his colleagues.

The majority of Styracosaurus fossils belonged to the northern species S. albertensis, but S. ovatus was only represented by a single specimen discovered in Montana. Paleontologists Andrew McDonald and Jack Horner named the 2010 Montana dinosaur Rubeosaurus ovatus in 2010. In just a few years, three Styracosaurus species were reduced to just one.

The huge nape, like the contemporary elephant’s ears, undoubtedly helped Styracosaurus and similar taxa control body temperature in addition to being defensive. It’s also possible that these were utilised to determine species or sexual dimorphism. On the nose was a long horn, over 60 centimetres long, pointing forward. The neck shield was constructed of two huge bone panes coated with skin membranes rather than solid bone. The size of the head alone must have impressed the dinosaur’s predators; it was 2 metres long and 1.5 metres wide.

Contents for Fun Facts about Styracosaurus

2: How do you pronounce ‘Styracosaurus’?

The name Styracosaurus should be pronounced ” sty-RAK-oh-sore-us.”

3: What does the name Styracosaurus mean?

Styracosaurus is derived from the Ancient Greek for “spike at the butt end of a spear-shaft” and sauros, which means “lizard.” Lawrence Lambe gave it its name, which literally translates to “spiked lizard.”

Due to its large size and short tail, Styracosaurus is frequently compared to modern rhinos. It had small legs, but the back legs were longer than the front ones. The Styracosaurus skull has provided a wealth of information on this dinosaur’s facial characteristics. It had a big nostril and a nose horn that stood up straight, and its head was pretty big. The type specimen, which Lawrence Lambe procured, had a 22-inch-long, incomplete nose horn.

This species shared the same neck frill as other ceratopsians, but it appeared to have four to six horns or spikes protruding from it. It also had shorter horns that were attached to its cheekbones. A beak-like feature was also visible in the dinosaur’s skull. Its cheek teeth were arranged in groupings known as batteries. In such a dentition, the newer teeth would gradually replace the older ones, preventing simultaneous use of all the teeth.