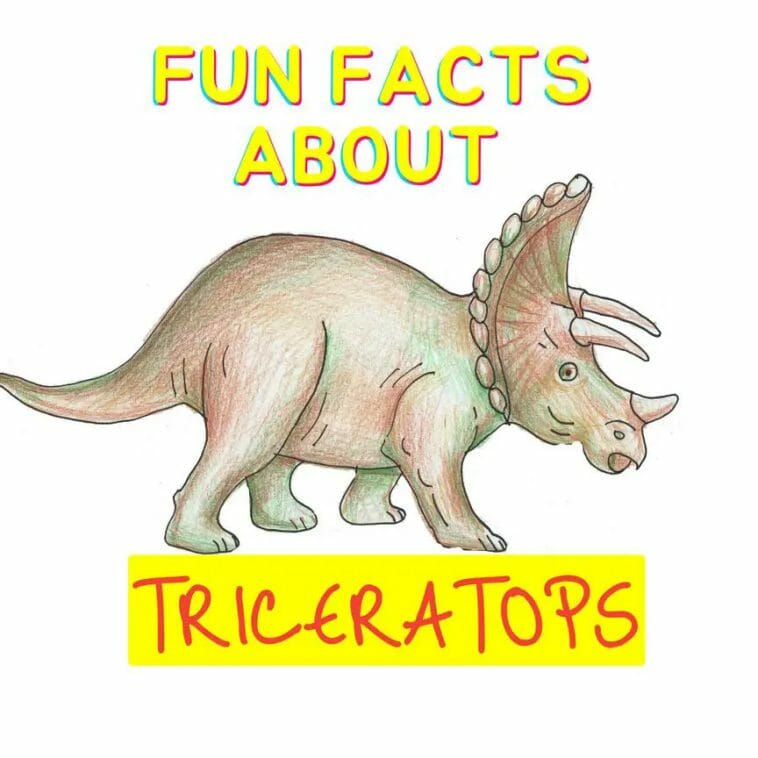 Triceratops had a single small nasal horn and horns extending above its eyes as long as hockey sticks. Its head was the largest ever possessed by a land animal, measuring up to three metres (10 feet) in length. It had a big brain and big eyes. Triceratops was most likely a courageous creature. Bones from fights with rivals or predators have been found in many species.

The most common dinosaur fossil currently discovered is that of the Triceratops, which has several sections of its body in the shape of skulls, frills, and horns. Check out these fascinating Triceratops facts.

Contents for Fun Facts about Triceratops

2: Where does the name Triceratops come from?

In 1887, the Triceratops was discovered and given to American palaeontologist Othniel Charles Marsh for research. Only the skull plate and two horns had been discovered at the time, and Marsh classified it as a peculiar prehistoric bison. In 1888, John Bell Hatcher discovered the first Triceratops skull. In 1889, O.C. Marsh gave Triceratops its formal name and description.

4: Where was first Triceratops found?

In the spring of 1887, George Lyman Cannon discovered in Denver, Colorado, a pair of brow horns affixed to a skull roof, which are now assigned to Triceratops. This specimen was submitted to O.C. Marsh, an American palaeontologist.

5: When did Triceratops first appear?

6: Where did Triceratops Live?

Triceratops inhabited the western United States (Montana, North Dakota, South Dakota, Colorado, and Wyoming) as well as western Canada (Alberta and Saskatchewan). Triceratops probably inhabited arid, wooded places and plains with abundant vegetation. Palms, ferns, and cycads were likely abundant in these areas. It is believed that Triceratops lived in herds, a view backed by the discovery of bone beds with enormous amounts of bones from numerous Triceratops individuals.

7: What did Triceratops eat?

Triceratops was a herbivore that preyed mostly on shrubs and other plants. According to a 1996 study published in the journal Evolution, its beak-like mouth was better suited for gripping and plucking rather than biting. Its horns and mass were probably also utilised to tip over higher plants.

According to the Evolution study, it had up to 800 teeth that were regularly regenerated. It could have consumed ferns, cycads, and palms, among other vegetation.

8: How big was the Triceratops?

According to a 2011 publication in the journal Cretaceous Research, Triceratops was a gigantic animal equivalent in size to an African elephant. Triceratops had a body length of around 9 metres, according to palaeontologists (30 feet). There are also estimates that the largest adults weighed between 5,450 and 7,260 kilogrammes (between 12,000 and 16,000 pounds).

9: How big is the biggest Triceratops?

Big John the Triceratops is the world’s largest Triceratops. It was around 26 feet (8 metres) long with a 6.6 foot (2 metre) wide skull. The skeleton was discovered in South Dakota’s Hell Creek Formation in 2014, and the skeleton is around 60 percent complete, with a 75 percent complete skull. Big John’s €6.6 million (US $7.7 million) auction price in 2021 made it the most expensive Triceratops skeleton ever.

10: How did the Triceratops protect itself?

Triceratops possessed two long forehead horns to defend itself against flesh eaters (predators). These could reach a length of at least 1 metre (3 feet). An attacker would have taken a lot of damage from a Triceratops. A third, shorter horn grew from the end of its nose.

In battles with its major predator, Tyrannosaurs, the dinosaur employed its horns and frill. Paleontologists discovered Triceratops brow horn and skull bones that had partially healed from tyrannosaur tooth marks, indicating that the Triceratops effectively repelled its attacker.

11: How fast can Triceratops run?

Triceratops walked on four legs and was quadrupedal. Triceratops possessed immense strength and power, but it was slow, with palaeontologists estimating a top speed of 20 miles per hour.

12: Why is Triceratops so popular?

Triceratops is a well-known three-horned big-headed dinosaur that can be found in museums, picture books, toy stores, and movie theatres. Triceratops is a well-loved and well-studied animal with a lot of intriguing questions still up for debate as a result, and a huge number of specimens have been uncovered.

The head of a Triceratops was enormous. It had one of the largest skulls of any terrestrial mammal known to science, and it was especially massive in comparison to the size of its body. It took up nearly a quarter of its entire body length, which is an incredible big head.

13: Fascinating Triceratops facts that you should know about: