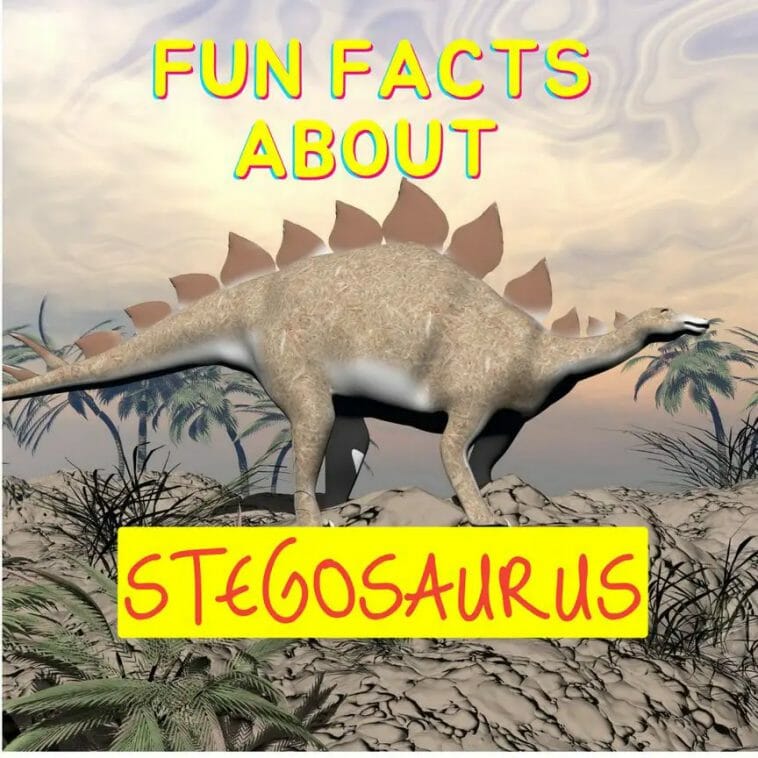 Stegosaurus was a big plant-eating dinosaur that lived in western North America during the late Jurassic Period, from 145 million to 155 million years ago. It walked on all four legs since it was a quadruped. The most well-known of the stegosaur group was the Stegosaurus.

In western North America, the Stegosaurus was the sole “plated” dinosaur. Stegosaurs had a unique appearance. Bony plates, often known as “dermal plates” or “dermal armour,” covered their backs. The amount of plates, as well as their placement and appearance, varied each stegosaur species, and were most likely one means for each species to recognise other members of its own species. Learn more amazing facts about the Stegosaurus.

Contents for Fun Facts about Stegosaurus

Name: Stegosaurus (Greek for “roof lizard”); pronounced STEG-oh-SORE-us
When it lived: Late Jurassic, 155-145 million years ago
Type of dinosaur: Armoured Dinosaur
Location: USA
Habitat: Semiarid climates with rainy and dry seasons. There were floodplains, savannas with ferns and trees, and woods.
Length/Weight: 9 meters/3000kg
Diet: Herbivorous
Distinguishing Characteristics: Armoured dinosaur genus with huge bone plates running down its neck, back, and tail. It had a small brain and head.
Named by: Marsh (1877)

2: How did the Stegosaurus get its name?

3: What is the nickname for Stegosaurus?

Othniel Charles Marsh named Stegosaurus from fossils discovered north of Morrison, Colorado, in 1877. The plates, like armour, lay flat against the back. The nickname for Stegosaurus, “Roof Lizard,” came from Marsh’s initial assessment. The shape of the plates revealed that they stood on edge rather than lying flat when more and full plates were discovered.

4: Who discovered the Stegosaurus?

Dacentrurus, the first stegosaur ever discovered, was uncovered in 1874 in Swindon, United Kingdom, and described by Richard Owen, the scientist who originated the term dinosaur. Three years later, in 1877, Othniel Charles Marsh discovered Stegosaurus armatus in the Rocky Mountains of the United States, giving the group its name.

5: When was the Stegosaurus first discovered?

M.P. Felch discovered the first Stegosaurus fossils in Colorado in 1876, and Othniel C. Marsh named it in 1877.

6: Where was the first Stegosaurus found?

The world’s first Stegosaurus fossil was discovered in Morrison, Colorado. Around 80 individuals’ fossils were discovered in the Morrison Formation, which is located in Wyoming and Colorado. Stegosaurus is considered the official fossil of Colorado, owing to the abundance of dinosaur skeletons discovered in the state. Montana, North Dakota, South Dakota, Nebraska, Kansas, Oklahoma, Texas, New Mexico, Arizona, Utah, and Idaho are also included in the formation.

7: How tall was a Stegosaurus and how much did it weigh?

Stegosaurus averaged around 6.5 metres (21 feet) in length, but some reached 9 metres (30 feet), stood 9 to 13 feet tall, weighed 6,800 pounds (3100 kg), and had a tiny brain (about the size of a walnut). Stegosaurus existed in what is now North America, on grassless savannas; many stegosaurus fossils have been discovered in Colorado, Utah, and Wyoming.

8: What dinosaurs did Stegosaurus live with?

Stegosaurus would have coexisted with Apatosaurus, Diplodocus, Brachiosaurus, Ceratosaurus, Allosaurus, and Torvosaurus, the latter two of which may have preyed on it.

9: How did Stegosaurus walk?

Stegosaurus moved on all fours, but you’ll note that his legs are of various lengths. The front legs are somewhat short, whilst the hind legs are quite long. This is because Stegosaurus descended from dinosaurs that could only move on their rear legs. Its forefathers used their short front legs to pick up and grip objects. However, in Stegosaurus, they have evolved to sustain their body weight.

Watch a virtual Stegosaurus walk as Sir David Attenborough explains how these dinosaurs would have moved.

Due to a mismatch in arm and leg length, Stegosaurus was restricted to an awkward, slow-moving walk. Stegosaurus couldn’t run and was clearly not an athlete. Stegosaurus’ walking pace was presumably limited to a few miles per hour, similar to that of rhinoceroses or elephants.

10: How fast could a Stegosaurus run?

In comparison to its hind legs, Stegosaurus had very short forelimbs. Furthermore, the lower half of the hindlimbs (comprising the tibia and fibula) was shorter than the femur. This indicates that it couldn’t walk very rapidly because the back legs’ stride would have passed the front legs at high speeds, resulting in a top speed of 6-7 km/hr (4-5 mi/hr).

11: How big is a Stegosaurus head?

The head and mouth of Stegosaurus are quite small. Stegosaurus had a small head in comparison to the rest of its body, with a brain the size of a plum.

12: How many bones does a Stegosaurus have?

There have only been a few Stegosaurus fossils discovered. Palaeontologist Bob Simon discovered a young adult Stegosaurus “Sophie” with 360 unique fossilised bones in 2003 at Red Canyon Ranch in Wyoming and it is estimated to be 150 million years old.

13: Did Stegosaurus have two brains?

No. One popular myth about Stegosaurus is that it possessed two brains, one in its skull and the other in its hips. However, it was discovered that the hip gap had nothing to do with a second brain. It’s actually a storage space for some food substances that allowed dinosaurs to survive during stressful times when there was less food available.

14: Why does Stegosaurus have plates?

For years, scientists have wondered why Stegosaurus had huge plates down its back. Some early palaeontologists speculated that they were used for defence, however this theory has since been debunked.

The plates are thin and delicate, despite their size. It is believe the plates had one of two purposes: either to display or to regulate the temperature of the animal. Stegosaurus may have used the plates to brag to each other about how huge, strong, and appealing they were.

The fact that the plates are so huge and have such a flat surface area suggests that it could be related to temperature. The plates appear to be densely packed with blood arteries. Warm blood would have been carried up into the plates by them, and they might have been used to dump heat onto the plates’ surface to help the animal chill down.

15: Did Stegosaurus use its tail as weapons?

Yes. Stegosaurus used its spiked tail to defend itself from predators like the Allosaurus and Ceratosaurus. Stegosaurus dinosaurs, who were generally depicted as plant eaters, were also deadly fighters who utilised their spiky tails to fight their foes. The biggest difference was that stegosaurs carried their weaponry on their tails instead of their heads. Stegosaur skeletons show that their tails were more flexible than the tails of most dinosaurs.

According to the researcher, in order to inflict the lethal wound to the allosaur, a stegosaur would have to sweep its tail under the allosaur and twist the tail tip, because the spikes generally point outward and backward. That would have been well within a stegosaur’s capabilities.

16: Why is Stegosaurus the best dinosaur?

Stegosauruses were herbivores, which was advantageous when they were living. Stegosauruses preserve the diversity of dinosaurs existing at the time since they exclusively consume plants rather than meat like other dinosaurs. This was a technique of remaining calm and only fighting when absolutely necessary, rather than for food.