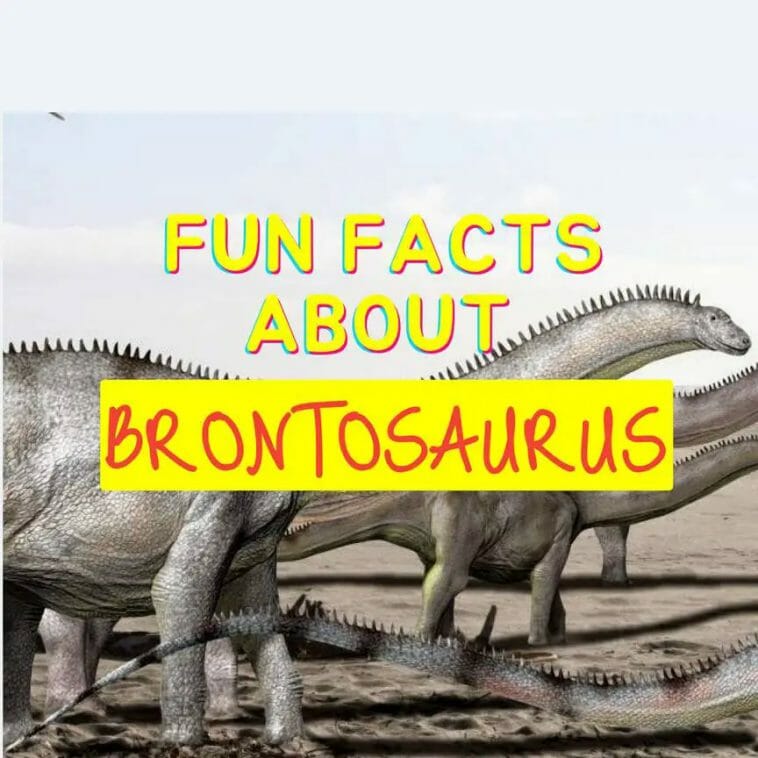 The Brontosaurus was a big sauropod, which is a group of dinosaurs that were typically large and had long necks and long tails. It existed between 156 and 145 million years ago, during the Late Jurassic Period. Brontosaurus is one of the most well-known dinosaurs, having appeared in films, advertisements, postage stamps, and a variety of other forms of media.

Contents for Fun Facts about Brontosaurus

Brontosaurus was a quadrupedal, huge, long-necked dinosaur with a long, whip-like tail and forelimbs that were somewhat shorter than the hind limbs. In comparison to other sauropods, they featured smoother scales, tiny spines on their backs, and an appealing and arched back. Brontosaurus were dark green, brown, or black in colour, with the exception of a few light-colored specimens. Their limbs were thick and their arms were long.

3: What does the name Brontosaurus mean?

Brontosaurus means “thunder lizard” in Greek and is derived from the words brontē “thunder” and sauros “lizard.”

4: How do you pronounce ‘Brontosaurus’?

5: Why was the Brontosaurus renamed Apatosaurus?

Brontosaurus was discovered for the first time in the United States in the 1870s. By the early 1900s, however, experts were beginning to wonder if the specimens that were used to name Brontosaurus were actually from another dinosaur, the strikingly identical Apatosaurus. Due to the rules of scientific naming, which say that the first name published is the most important, the fossils of Brontosaurus were given to Apatosaurus instead.

That was until 2015, when an unexpected study found proof that Brontosaurus was different from Apatosaurus all along. This means that this famous dinosaur is once again a separate species.

6: What did Brontosaurus eat?

Brontosaurus was a land-dwelling herbivore. Its long neck may have evolved to allow it to reach marshy vegetation from afar or leaves higher in the trees. Stones were also ingested by Brontosaurus to aid in the grinding and digestion of unchewed plant materials after it entered the stomach.

In 1879, Othniel Charles Marsh, a palaeontology professor at Yale University, revealed the discovery of a massive and somewhat complete sauropod skeleton found by William Harlow Reed in the Morrison Formation rocks of Como Bluff, Wyoming. It belonged to a totally new genus and species, which he designated as Brontosaurus excelsus.

8: Did Brontosaurus live in water?

In the past, scientists believed that huge dinosaurs such as Brontosaurus spent the majority of their time in water. They reasoned that because the dinosaurs’ bodies were so gigantic, they wouldn’t have been able to maintain their own body weight if they lived on land, and would instead have relied on the water to support them.

Elmer Riggs was among the first scientists to claim that sauropods lived on land. His proposal was generally disregarded until more study in the 1970s supported his theory. The structure of the limbs, spine, hands, and feet are all adaptations for carrying a substantial amount of weight on land.

9: Where did Brontosaurus live?

Brontosaurus roamed North America during the Jurassic period, which lasted from 156-145 million years ago. Its fossils have been discovered in Wyoming, Colorado, and Wyoming, among other places.

10: What kind of climate did Brontosaurus inhabit?

Brontosaurus lived in grasslands with ferns, horsetails, and bennettites as part of its terrestrial habitat. They used to move through wide forests, shrublands, conifer forests, seed ferns, cycad groves, and Gingkos, among other things.

11: What was Brontosaurus’s height and weight?

Brontosaurus excelsus was the largest of the species, weighing up to 17 tonnes (15,422 kg) and measuring up to 22 metres (72 feet) from head to tail.

12: What makes a Brontosaurus different from a Brachiosaurus?

13: How did the Brontosaurus protect itself?

Brontosaurus was able to defend its head and neck from predators by having a head that stood above the greatest carnivores during the late Jurassic period. The massive bullwhip-like tail also functioned as an effective weapon for defending itself against predator attacks.

14: How fast can Brontosaurus run?

Due to their enormous size, it was anticipated that these dinosaurs would have moved slowly. To our astonishment, their speed ranged from 12.42 to 18.64 mph (20-30 kph).