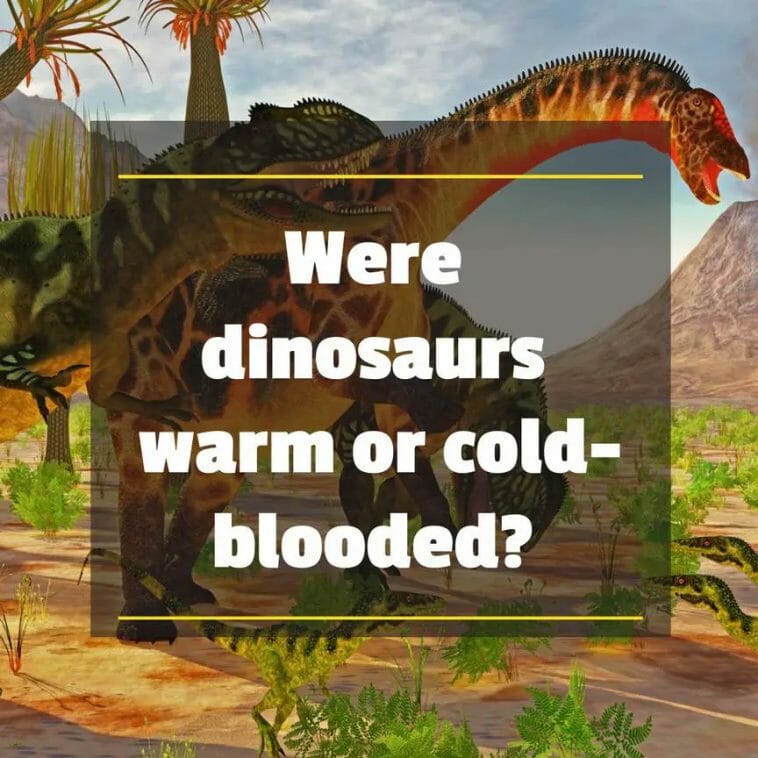 Paleontologists have debated whether dinosaurs had warm or cold blood for a long time. Some paleontologists believe that all dinosaurs were warm-blooded in the same way as modern birds and mammals are, meaning that their metabolic rates were fast. Others disagree, believing that any dinosaur might have had a fast metabolic rate.

Some scientists believe that, like some sea turtles today, very huge dinosaurs may have had warm bodies due to their large body size. Some dinosaurs may have been warm-blooded. The trouble is that it’s difficult to uncover proof that dinosaur metabolisms were similar to ours.

Why do some scientists think that dinosaurs were cold-blooded?

Dinosaurs were formerly assumed to have a cold-blooded metabolism similar to reptiles. In other words, they couldn’t regulate their body temperatures internally and had to rely on their surroundings to keep warm. As a result, they developed slowly and moved slowly.

How did scientists discover that dinosaurs were warm-blooded?

The last dinosaurs to survive are warm-blooded birds. Birds have the highest metabolic rate of any living species. The amazing degree to which they can use the fuel stores in their bodies fuels the flight of most birds, allowing them to populate the whole planet. Additionally, it helps them produce body heat. This means that birds are endothermic, or warm-blooded, and can keep their body temperatures stable no matter how hot or cold it is outside.

It is uncertain when birds evolved such a high metabolic rate. Theropod dinosaurs, which included well-known species such as Tyrannosaurus rex and Velociraptor, are the last group to evolve into birds, may have been warm-blooded, according to a recent study published in the journal Nature.

In the year 2020, Jasmina Wiemann, a molecular paleobiologist at Yale University, and her colleagues demonstrated that studying biomolecules such as proteins, lipids, and sugars found in ancient fossils could provide vital insights about dinosaur metabolisms.

Wiemann and his colleagues were able to determine a scale of waste to metabolic rate by comparing the levels of respiration waste discovered in the bones of these diverse still-living species. Then, using this information, they calculated the metabolism of the extinct species.

What did the paleobiologists discover?

The researchers determined that high metabolic rates associated with endothermy occurred in pterosaurs, ornithischians, sauropods, and theropods well before the evolution of energy-intensive adaptations such as flight in birds. This suggests that numerous classic dinosaurs were warm-blooded.

The theropod dinosaurs, which included the Brontosaurus, were warm-blooded, with some exhibiting metabolic rates equivalent to those of current birds, which were significantly greater than those of mammals. It is possible that pterosaurs and plesiosaurs were likewise warm-blooded. Wiemann argues that in order to sustain their active metabolisms, all of these ancient species would have had to consume a great deal of food.

Bird-hipped dinosaurs such as Triceratops, Stegosaurus, and Ankylosaurus possessed metabolic rates equivalent to those of modern cold-blooded animals. Wiemann speculates that, like modern cold-blooded reptiles like lizards and turtles, they basked in the sun and migrated to warmer locations during the winter.

Most dinosaurs were warm-blooded

These findings disprove the idea that birds and mammals might have survived the mass extinction of the late Cretaceous because they had warm blood. This characteristic was shared by a significant number of their extinct contemporaries. High metabolic rate has always been cited as one of the most important benefits for surviving catastrophic extinctions and effectively spreading afterwards.

We are currently experiencing the sixth mass extinction, so it is essential that we comprehend how extant and extinct creatures physiologically responded to earlier climate change and environmental disturbances, so that the past might influence current biodiversity conservation efforts and future actions. The researchers are now looking for further information on a range of creatures, including mammalian predecessors, so they can track how metabolism and being warm-blooded have changed over time.