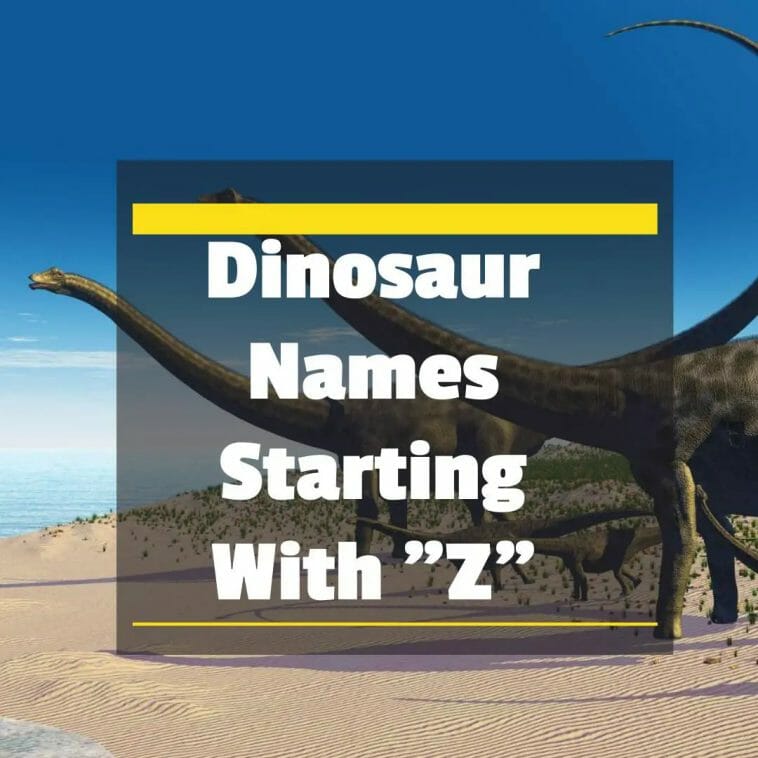 Check out the alphabetical list of dinosaur names beginning with the letter “Z”. We’ll look at dinosaur pictures and discuss what their names mean, as well as learn more about dinosaur facts.

Dinosaurs with names that begin with the letter “Z”

Contents for Dinosaur Names that Start with “Z” 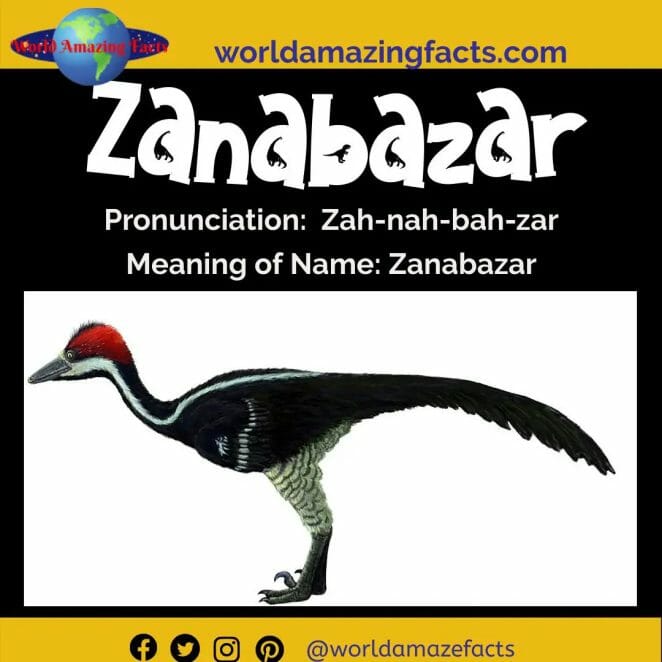 Zanabazar was a huge Troodontid that lived in Asia during the Late Cretaceous period.

Zanabazar was named after Zanabazar (1635-1723), Mongolia’s first godd gegeen. The species name translates as “younger.” Half a century after Saurornithoides mongoliensis, Barsbold described it as Saurornithoides junior. 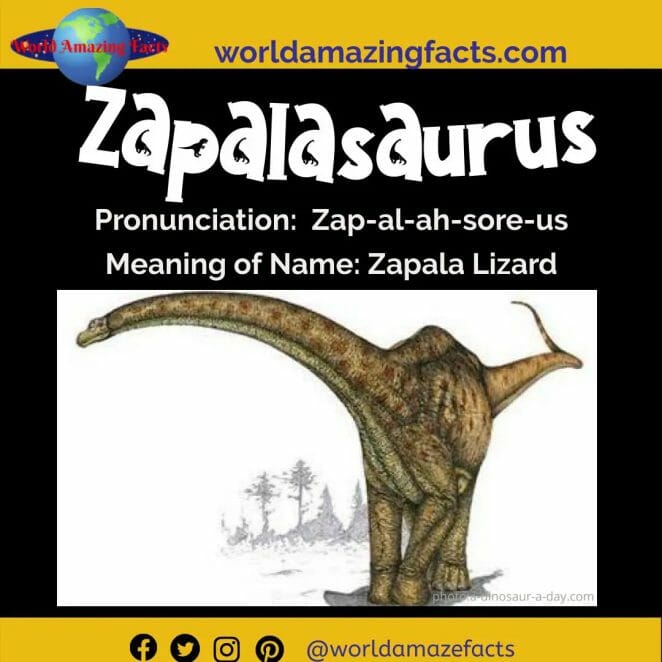 Zapalasaurus is a sauropod of the Rebbachisauridae family that lived in Argentina during the early Cretaceous epoch.

The name Zapalasaurus alludes to the city of Zapala in Argentina’s Neuquen province. The second component of the name is derived from the Greek sauros (“reptile”, “lizard”), which is frequently used in dinosaur names. The genre name pays homage to palaeontologist Jose Bonaparte. 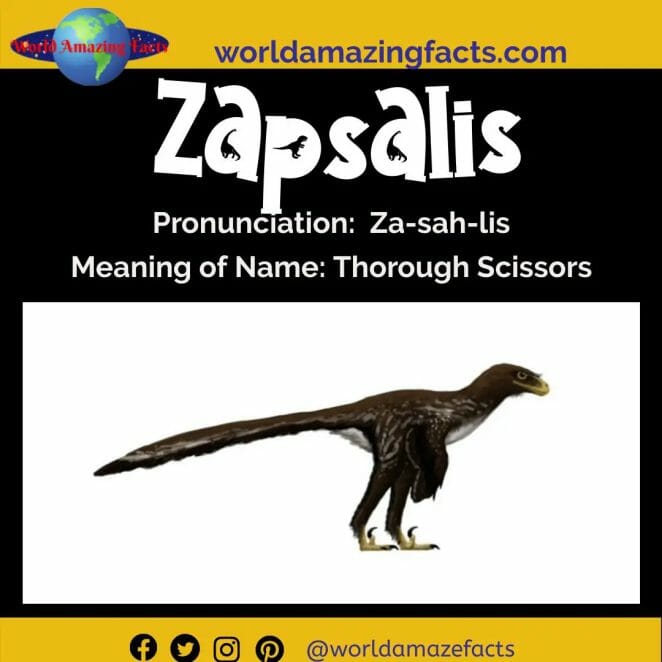 Zapsalis is a questionable genus of a tiny theropod of the Dromaeosauridae family found in what is now North America.

Zapsalis is derived from the Greek terms for “extremely” and psalis (“scissors”). This is a reference to the blade-like teeth’s form. 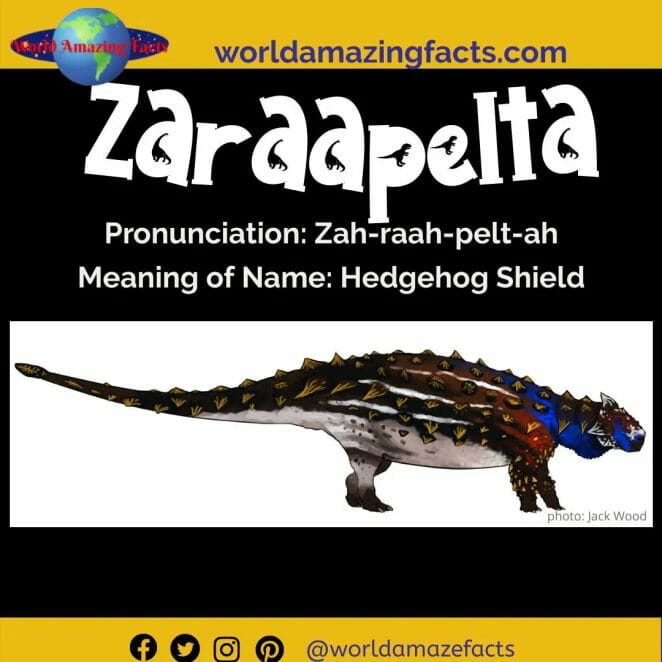 Zaraapelta is an advanced ankylosaur representative. Zaraapelta fossils were discovered in the Gobi Desert. Zaraapelta lived in these places during the Late Cretaceous period, several million years before the dinosaur extinction.

The generic name is derived from the Mongolian zaraa, “hedgehog,” in allusion to ankylosaurs’ prickly look, and the Greek peltè, “small shield,” which is a common component of ankylosaurian names because to its body armour. The species name nomadis is derived from the Latin word nomas, which means “nomad,” and relates to the Nomadic Trips travel organisation, which has organised numerous palaeontological expeditions to Mongolia. 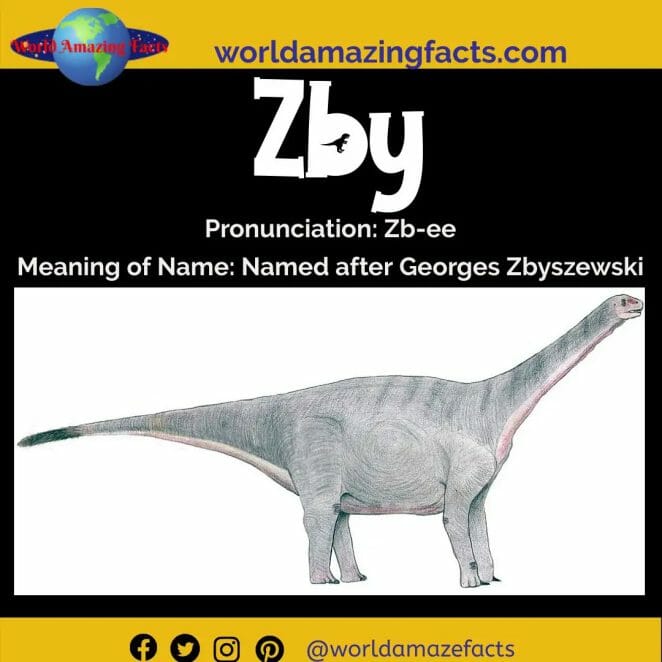 Zby is a non-neosuropodic eusaropod from the late Jurassic period of Portugal. Octávio Mateus, Philip Mannion, and Paul Upchurch described it in 2014.

Zby was named after the Russian-French palaeontologist of Polish origin, Georges Zbyszewski, who devoted his life to studying the geology and palaeontology of Portugal. The species name, atlanticus, is derived from the location of the specimen, a scenic bay on the Atlantic Ocean. 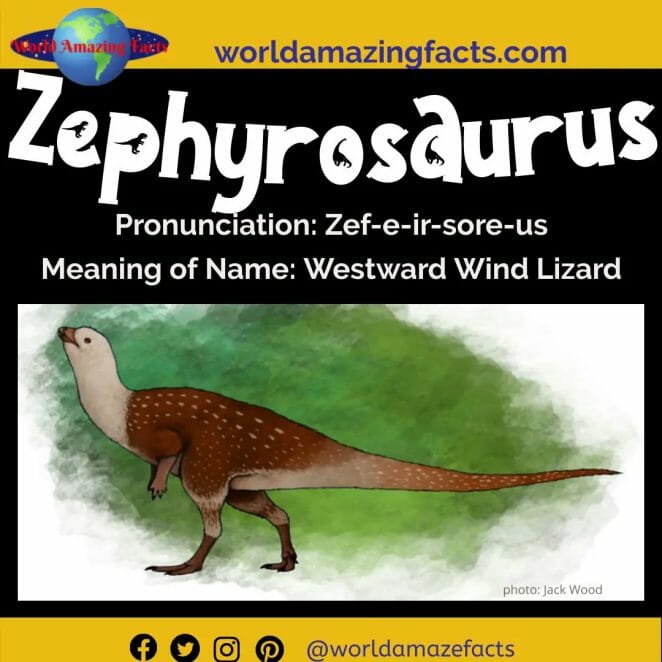 Zephyrosaurus is a tiny form of parksosaurid that existed in what is now North America during the Early Cretaceous Period. Fossils of Zephyrosaurus have been discovered in Montana. The Zephyrosaurus was a herbivorous animal that could graze on all four limbs while eating low vegetation, but preferred to graze on its hind legs.

The name Zephyrosaurus refers to the Greek god of the west wind as well as the lizard Zephira. It was given in recognition of its discovery in western North America. In turn, the dinosaur’s species name (schaffi) honours Charles R. Schaff, the discoverer of the first Zephyrosaurus fossils. 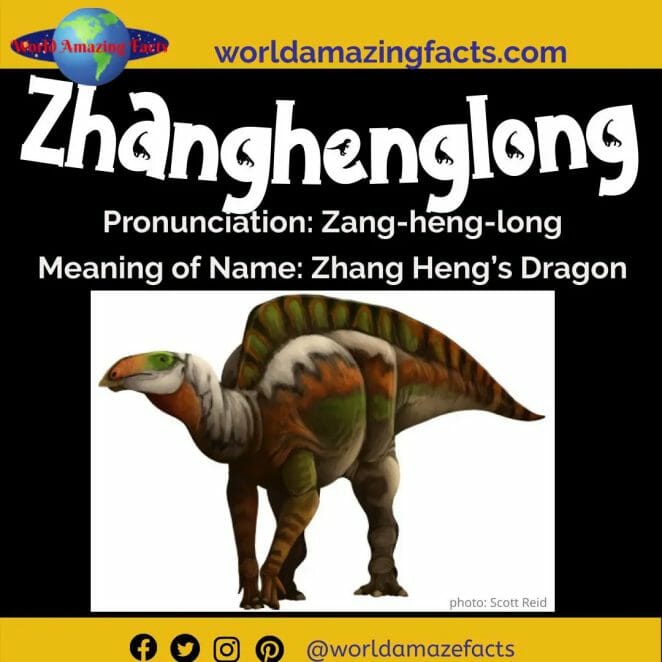 Zhanghenglong is a basal hadrosauroid from the late Cretaceous period of China.

The name ” Zhangheng ” is derived from Zhang Heng, a great Chinese astronomer, mathematician, inventor, poet, and statesman of the Eastern Han Dynasty (ca. 25-220 AD). This character was born on the outskirts of Nanyang in the southwestern Henan province, not far from the Xixia Basin, where zanghenglong were discovered.

The word “long” is a literal transcription of a word that meaning dragon in Mandarin (China’s official language). The name “yangchengensis” is derived from a historical administrative region called Yangcheng, which included what is now southwestern Henan Province. 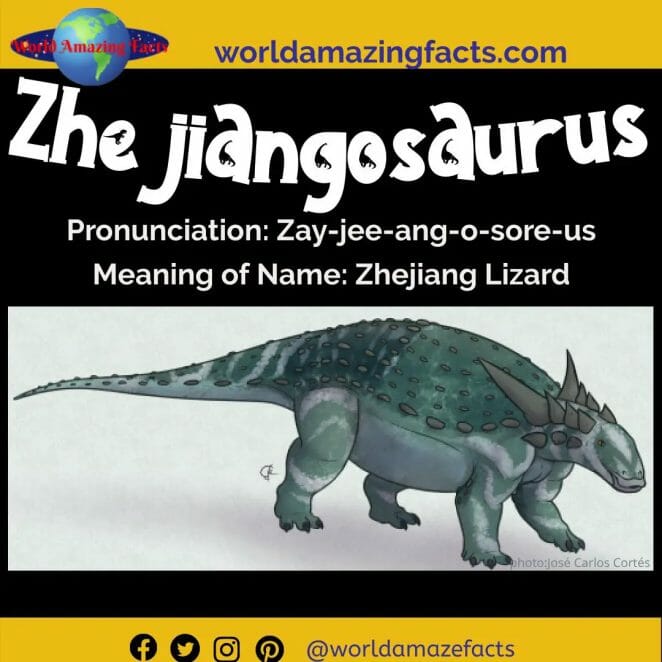 Zhejiangosaurus is an ankylosaur from the Upper Cretaceous of Zhejiang, eastern China, that lived between 100.5 and 93.9 million years ago. It is only known from a fragmentary partial skeleton, and it is a controversial taxon, formerly assumed to be a Nodosaurid and subsequently an Ankylosaurine. 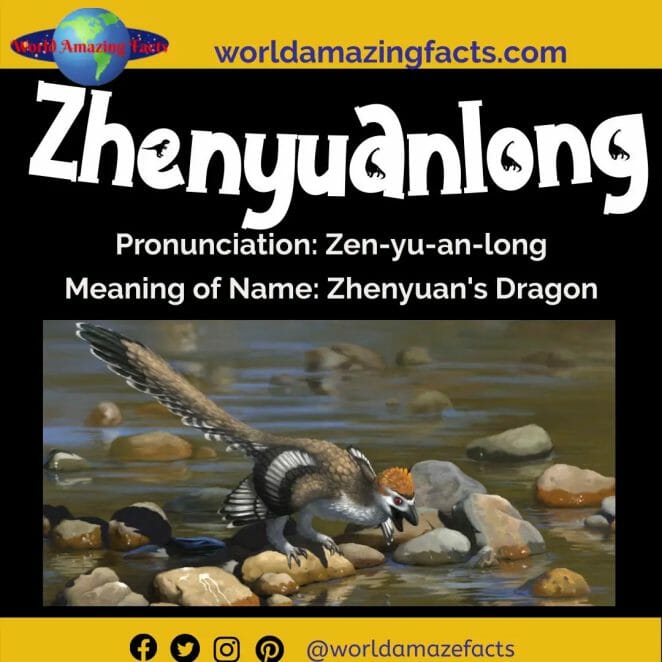 Zhenyuanlong suni was a predatory, feathered Dromaeosauridae dinosaur that lived in what is now China. Zhenyuanlong is a member of the Yixian Formation, which is about 125 million years old.

Long means “dragon” in Chinese, while the remainder of the name pays tribute to Mr. Zhenyuan Sun, who obtained a specimen of this dinosaur for research. 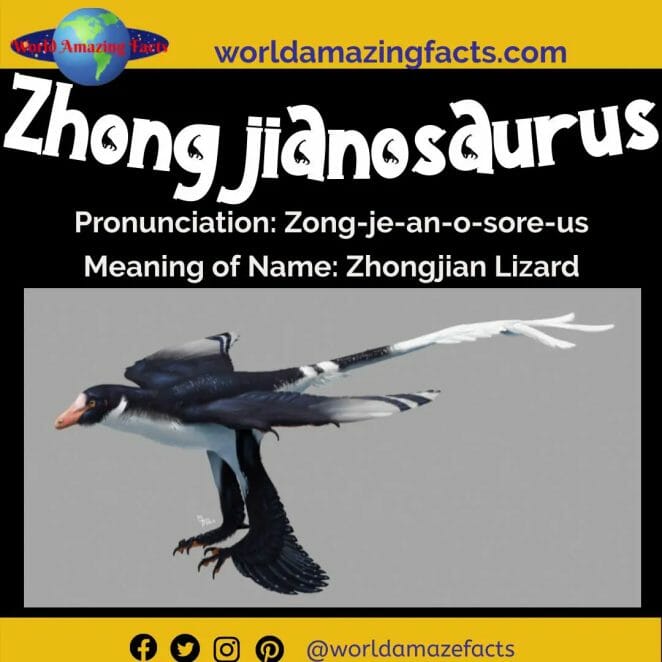 Zhongjianosaurus is a genus of relatively small dromeosaurids that lived in China during the Early Cretaceous epoch. Zhongjianosaurus was a non-avian dinosaur that was one of the smallest. 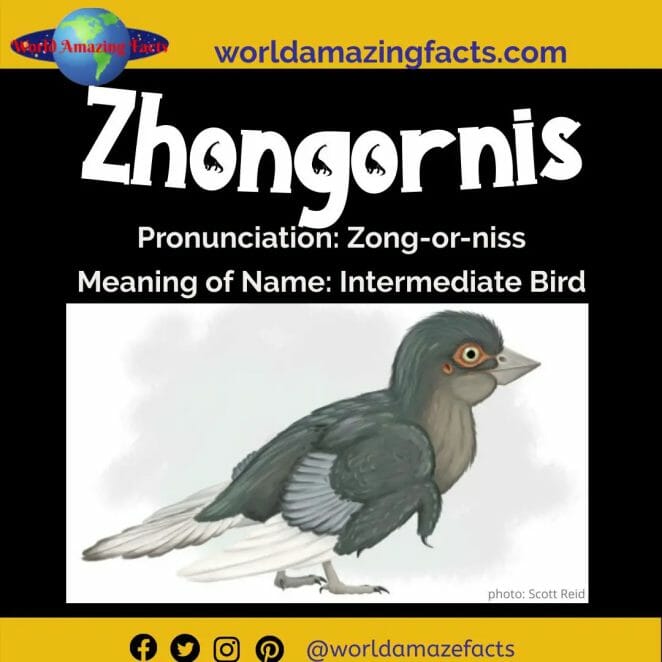 Zhongornis was a theropod that lived in modern-day China during the Early Cretaceous epoch. The only notable species is Z. haoae.

The species epithet honours the specimen’s donor, Mrs. Hao, while the generic name is a combination of Chinese zhong (intermediate) and Greek ornis (bird). 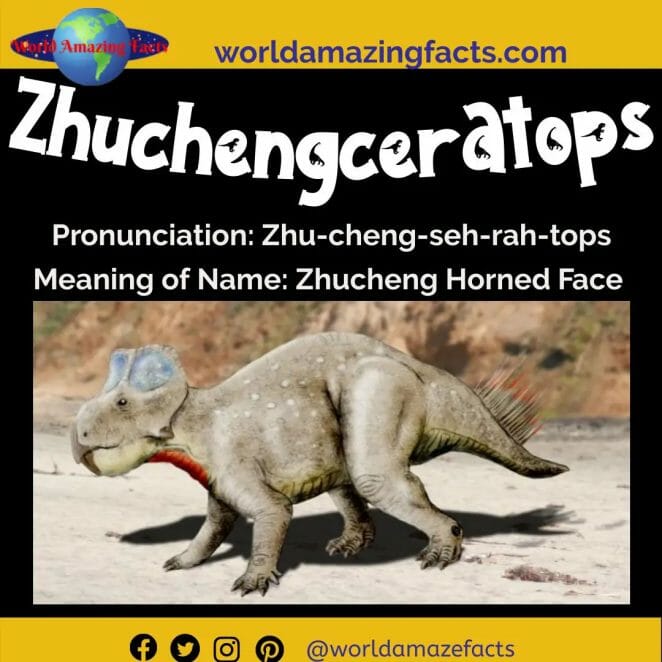 Zhuchengceratops is a kind of ceratops from the Leptoceratopsidae group that lived in China during the Late Cretaceous epoch.

Zhuchengceratops gets its name from Zhucheng County in China’s Sichuan Province. The second component of the name signifies “horned face” and is widely used in ceratops nomenclature. The species name inexpectus refers to the unexpected discovery of Zhuchengceratops. 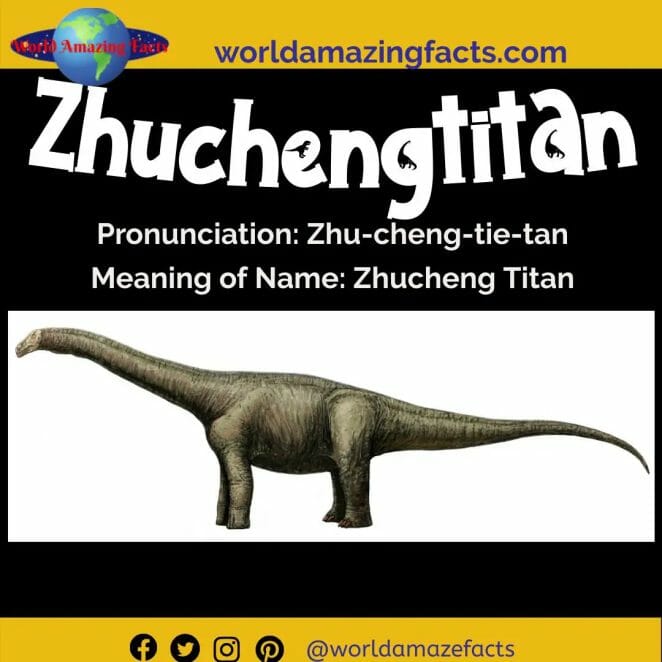 Zhuchengtitan was a titanosaur that lived in what is now eastern China during the Late Cretaceous period. It is the first Titanosauria clade member discovered in these locations. This genus, discovered in 2017, is most likely the closest Asian titanosaur to Opisthocoelicaudia.

Zhuchengtitan means “Titan of Zhucheng,” a city in the Shantung province. There are numerous rock beds with dinosaur fossils in its neighbourhood. 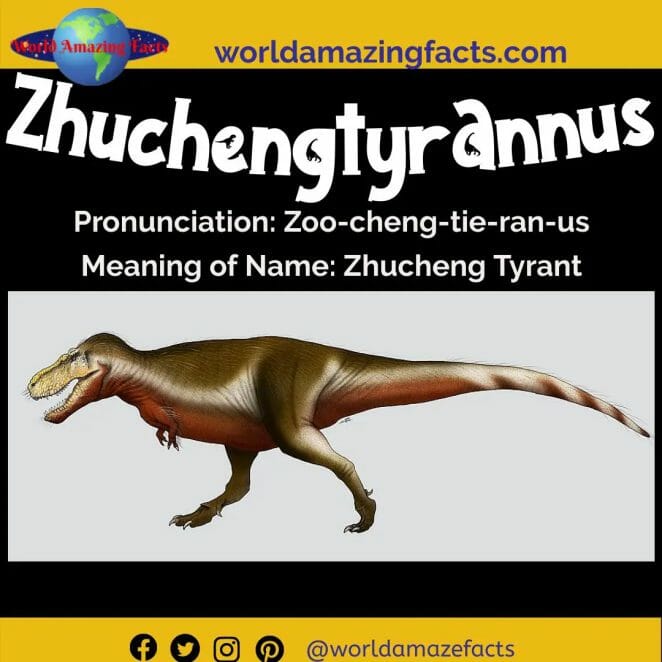 Zhuchengtyrannus gets its name from the city where it was discovered, Zhucheng, and the species epithet magnus means “great.”

Ziapelta is an example of an advanced ankylosaur. The remains of Ziapelta were discovered in what is now New Mexico (USA) and were publicly described in 2014 by a team of scientists led by Victoria Arbor. Ziapelta lived in these places approximately 74.5-72.6 million years ago, during the Cretaceous period.

This ankylosaurus’ species name, sanjuanensis, relates to the county where its fossilised bones were discovered – San Juan. 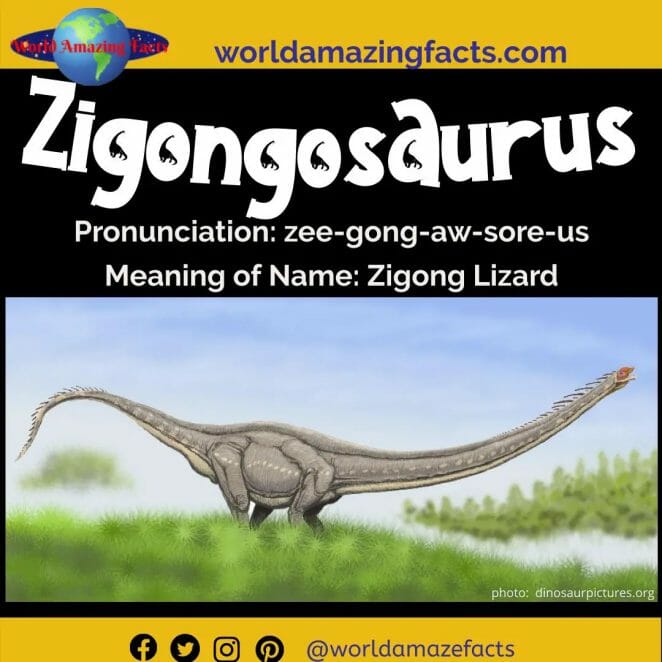 Zigongosaurus is a little-known sauropod from modern-day China. Most scientists believe that this is another instance of the well-known Mamenchizaurus.

Zigongosaurus is a genus name that means “Zigong lizard.” Zigong is a city in the Chinese province of Sichuan, most known for housing examples of “terrible lizards” such as the Gigantspinosaurus and Huayangosaurus stegosaurs, the Omeisaurus sauropod, the Xiaosaurus ornithopod, and the Yangchuanosaurus hepingensis theropod.