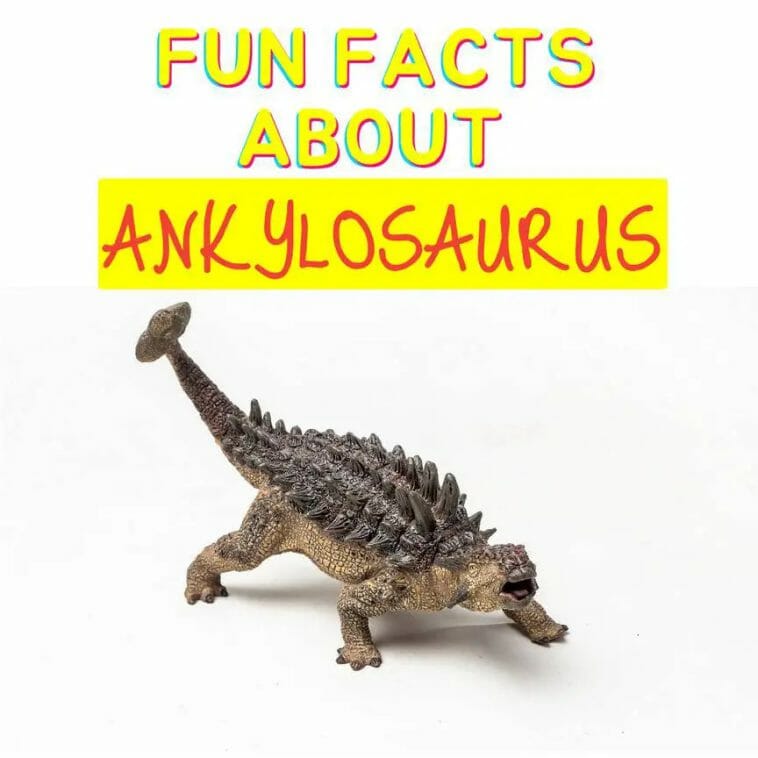 Ankylosaurus was a big armoured dinosaur with a wide, strongly armoured cranium and a massive tail club. Ankylosaurus was a herbivore from the late Cretaceous epoch with a walnut-sized brain. This tank-sized herbivore posed a significant threat to even the most aggressive carnivores.

Below, we will examine this prototypical armoured dinosaur and provide all the information you might want, from physical appearance to fossil discoveries.

Contents for Fun Facts about Ankylosaurus

Osteoderms covered the entire head and were so large that they were often the only parts of the animal that could be properly preserved. In order to allow for movement, smaller pieces of the larger plates and panels inside the centre were used to cover the shoulder and neck. To protect these herbivores from enormous predators, four massive horns protruded from the bottom of the armoured head.

The Ankylosaurus’ body width made it a formidable opponent, especially when it started swinging its bony tail club. The skeleton of the club tail was made up of many large osteoderms connected to the terminal vertebrae at the tail lobe. The tails were originally designed to protect the animals from predators.

3: What does the name Ankylosaurus mean?

In Greek, Ankylosaurus literally means “fused lizard.” The Ankylosaurus was given its name because fossils revealed that the bones in its cranium and other areas of its body were united, making the dinosaur exceedingly tough. Barnum Brown termed the specimen “ankylosis” after the medical term for the fusion of bones in the body that produces stiffness. This species’ full scientific name is Ankylosaurus mangiventris.

4: How do you pronounce ‘Ankylosaurus’?

Ankylosaurus is pronounced as “an-KIE-loh-sore-us.”

5: What is the nickname of Ankylosaurus?

6: What did Ankylosaurus eat?

Ankylosaurus had little teeth in the shape of leaves, which were used to remove leaves and buds from plants. Ankylosaurus, unlike many of its contemporaries, lacked tooth batteries for crushing leaves and plants. Because of the difference in herbivorous teeth, Ankylosaurus most likely consumed vegetation whole, with little to no decomposition before reaching the stomach.

Barnum Brown discovered the first Ankylosaurus specimen in the Hell Creek Formation of Montana in 1906. This skeleton was made up of ribs, armour, a shoulder girdle portion, vertebrae, and the top of a skull.

8: Where did Ankylosaurus live?

Ankylosaurus lived at the end of the Cretaceous Period between 74 and 67 million years ago. This armoured dinosaur was discovered for the first time in Montana’s Hell Creek Formation. Ankylosaurus remains have been discovered in the Scollard Formation of Alberta, Canada, and the Lance Formation of Wyoming.

Ankylosaurus has yet to be discovered in its entirety. Paleontologists know that this dinosaur lived on the western coast of the shallow sea that divided the North American continent, based on the fossils recovered. This region represented floodplains with abundant vegetation throughout the late Cretaceous epoch.

9: When was the Ankylosaurus alive?

Ankylosaurus roamed the western region of the United States and Alberta in Canada during the late Cretaceous Period, around 67 million to 74 million years ago.

10: What kind of climate did Ankylosaurus inhabit?

Ankylosaurus thrived in a subtropical climate with plenty of heat and humidity. The Ankylosaurus dinosaur lived in a terrestrial environment in the southern United States and Mexico. Historic rivers and streams are regarded to be dinosaurs’ favoured habitats, according to dinosaur study. Natural forested floodplains and thickly vegetated swamps, seasides, wooded region segments, and lakes were all home to the Ankylosaurus.

11: What was Ankylosaurus’s height and weight?

12: What was Ankylosaurus known for?

Ankylosaurus was known for its thick, knobby armour that covered its head, neck, back, and tail—basically everything except its delicate underbelly. Scutes, or densely packed osteoderms, were firmly imbedded bone plates that served as armour.

13: What dinosaurs did Ankylosaurus live with?

The Ankylosaurus specimen was discovered with Oviraptor, Segnosaurus, Khaan, and Tarbosaurus during the Middle to Late Cretaceous epoch. Triceratops, Torosaurus, Edmontosaurus, Trodon, Pachycephalosaurus, and Tyrannosaurus Rex were all contemporaries of this enormous herbivore.

14: How did the Ankylosaurus protect itself?

The Ankylosaurus was a large dinosaur with vast plates of body armour to protect itself from predators, as well as a massive tail club capable of breaking bones. Ankylosaurus’ fat bony tail club proved to be another deadly opponent, capable of breaking bone with direct impact. A fractured bone in a huge carnivore like the Tyrannosaurus Rex might easily lead to death from malnutrition or infection. The Ankylosaurus’ armour plates would have served as a shield. They were incredibly difficult to penetrate.

15: How did Ankylosaurus walk?

Ankylosaurus walked on all four limbs, with the rear legs being significantly longer than the forelegs. Though there aren’t enough foot remains to prove that Ankylosaurus had toes, it’s thought that the dinosaurs had five toes on each foot, just like other ankylosaurs.

16: How many teeth does a Ankylosaurus have?

The Ankylosaurus was remarkable in that it did not have any grinding teeth. The jaw began with a beak and continued with teeth. The teeth were shaped like leaves and positioned far back in the mouth.

17: How fast can Ankylosaurus run?

Despite the fact that they are not predators, they might be considered active when in need. Ankylosaurus was a quadrupedal dinosaur that could walk on all four legs. Because it was so hefty, the greatest speed of an Ankylosaurus is estimated to have been only 6 mph (9.7 kph).

18: Why is the finding of Ankylosaurus significant

For a variety of reasons, palaeontologists consider Ankylosaurus to be a significant dinosaur specimen. Ankylosaurus is significant because it is the largest of the armoured Ankylosaurids and one of the most dangerous prey items of the time.

Ankylosaurus is especially significant since it was one of the last dinosaur species to evolve before the end of the Cretaceous period. This Ankylosaurid, being one of the last dinosaurs to evolve before the Cretaceous-Paleogene extinction catastrophe, sheds light on how herbivores reacted to the massive carnivores they faced over time. Ankylosaurus could have been a forerunner to herbivorous dinosaur evolution.