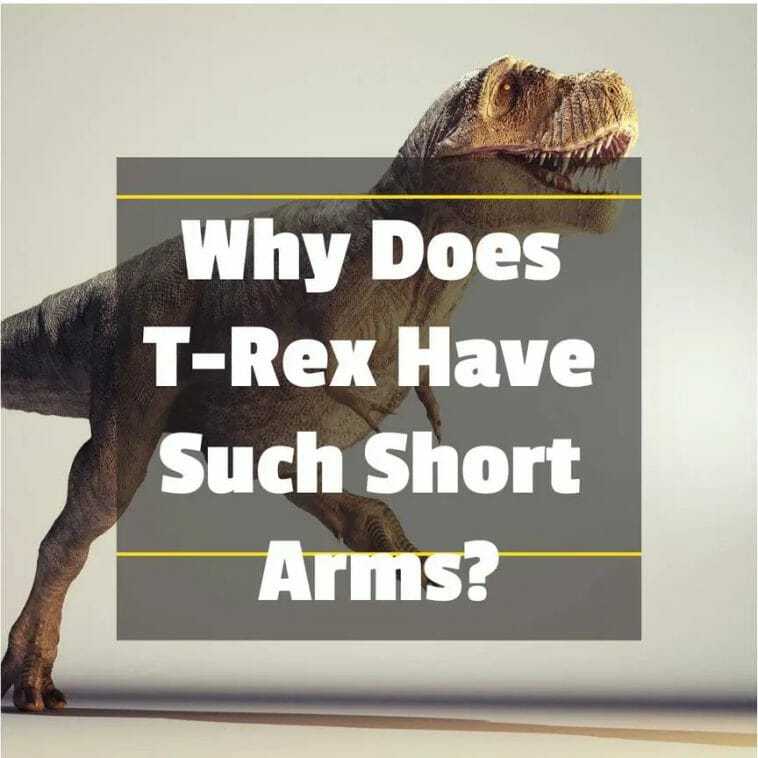 Tyrannosaurus rex is still considered one of the world’s greatest predators. This theropod lived between 68 and 66 million years ago, during the Cretaceous Period. The scary carnivore is 12 metres long, and each of its 60 teeth is up to 20 centimetres long. It had a bite that was three times stronger than a lion’s, allowing it to effortlessly chew through bone.

Even so, this ‘king of the dinosaurs’ had one flaw: absurdly short arms. Compared to the size of its body, this dinosaur’s arms were only approximately one metre long. Researchers, students, learners, and casual dinosaur fans have all wondered why this gigantic dinosaur had such tiny arms at one time or another. When confronted with a T. Rex skeleton in a natural history museum, though, one question constantly arises: “Why are their arms so small?”

Since the first complete T. rex skeleton was discovered in 1904 by dinosaur hunter Barnum Brown, scientists have been attempting to answer that question. Brown was sceptical that the arms he discovered belonged to the same animal.

Palaeontologists have presented many explanations about how T. rex’s short, weak arms lost movement and length.

For decades, theories concerning the T. rex’s arms have circulated, largely because they are absolutely bizarre. According to studies, T. rex arms have been found to bench press 400 pounds. Despite their raw strength, the arms were not only small, but they also had a limited range of motion, only swinging across at a 45-degree angle. The forelimbs may have been employed to grab and hold females during mating, according to one notion.That was Barnum Brown’s initial assumption.

Another theory holds that T. rex used its arms as a lever to pull itself off the ground if it had fallen. Or, they may have slept in such a way that they could be utilised to pull themselves up. Some scientists suggest that the arms were employed to capture prey before to their execution. The arms, according to Steven Stanley, a palaeontologist at the University of Hawai’i at Manoa, were employed to slash prey in close proximity, since the predator’s crescent-shaped talons could be utilised to inflict lethal wounds on victims.

Others have long argued that they are vestigial; an evolutionary remnant from the descendants of the T. rex. Like the wings of today’s flightless animals, such as ostriches and emus, the arms were no longer required. There are numerous theories as to why T. rex’s arms were so short, ranging from mating to catching prey or performing some other predatory function. However, none of these concepts has been able to gain traction or force itself on the others.

Kevin Padian outlines the new idea behind why Tyrannosaurus rex’s arms are so incredibly short.

In a new study published in the journal Acta Palaeontologia Polonica, scientists hypothesised that the T. rex evolved to be shorter in order to reduce the chance of arm loss during feeding frenzy.

T. rex’s arms were originally longer, but were shortened through time to prevent accidental or intentional amputation, according to Kevin Padian, a palaeontologist at the University of California, Berkeley. When a group of T. rex dinosaurs converged on a carcass to eat, despite their large heads and powerful jaws, none of the individuals in the group would accidentally amputate their own forelimbs. According to Kevin, severe wounds, such as the loss of a leg due to an overly eager or aggressive packmate, can result in life-threatening complications such as bleeding, shock, or infection.

Kevin professes to be under no delusion that his explanation for why the T-arms Rex’s are so short will be the final word on the topic, despite having published an intriguing and novel theory on the matter.