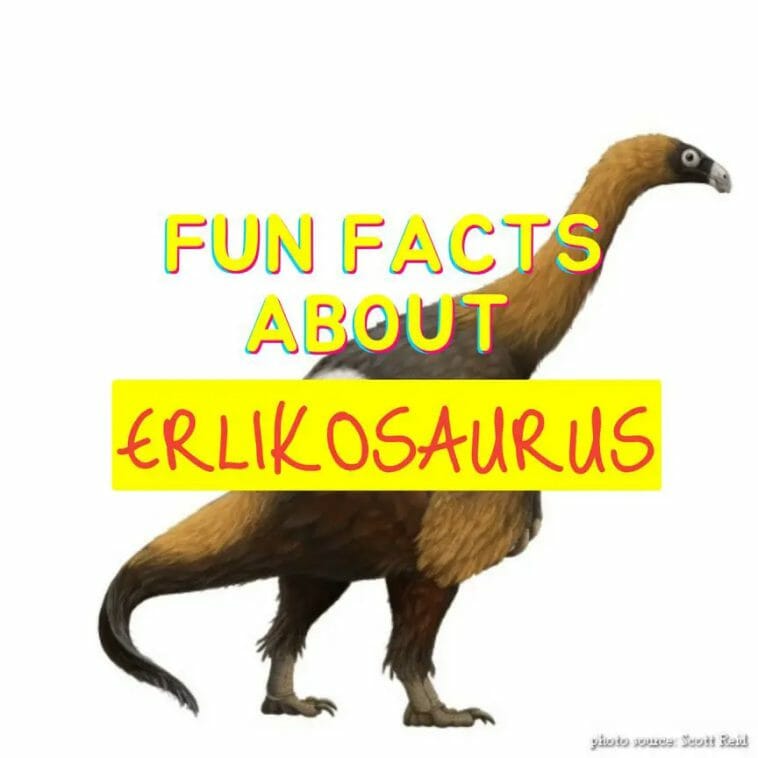 Erlikosaurus was a herbivorous theropod dinosaur that lived in the late Cretaceous Period and belonged to the Therizinosauridae family. Its fossils, which include a skull and post-cranial fragments, were discovered in Mongolia’s Bayan Shireh Formation around 90 million years ago.

Contents for Fun Facts about Erlikosaurus

Erlikosaurus was described as a small, slender, and light-bodied theropod, in contrast to other huge dinosaurs of the same family. It was most likely a feathered creature. It had huge claws, a big and hefty torso, and a backward-directed pelvis as a therizinosaurid.

Erlikosaurus was characterised by a long snout with a well-developed beak at its tip. According to studies, Erlikosaurus had a cartilaginous septum, a maxilla that was triangular in shape, and a toothed jaw. The skull also revealed the premaxilla, which explains the nasal processes’ extension. The cerebellum was determined to be robust and extended upon examination of the skull. The feet were comprised of four toes, the first of which was articulated to the ankle, unlike the majority of theropods, in which the first toe was vestigial.

3: What does the name Erlikosaurus mean?

Erlikosaurus is a genus of dinosaurs that meaning “Erlik’s lizard.” The Erlikosaurus gets its generic name from Erlik, a demon king from Turko-Mongolian mythology, and its specific name, ‘andrewsi,’ is named for Roy Chapman Andrews, an American palaeontologist who led American-Asian expeditions between 1922 and 1930.

4: How do you pronounce ‘Erlikosaurus’?

Erlikosaurus is pronounced as ‘er-lik-oh-sore-us’.

5: What did Erlikosaurus eat?

Some believed that these dinosaurs were herbivorous and so dined on plant matter, while others feel it was carnivorous due to the jaw structure and the teeth and force bite of Erlikosaurus andrewsi.The well-developed beak facilitated the harvesting of vegetation. Consequently, its diet and food source are uncertain.

Erlikosaurus fossils, including a well-preserved skull, a nearly entire right foot, and a nearly full left humerus, were discovered in 1972 during a Soviet-Mongolian expedition. Altangerel Perle and Rinchen Barsbold described the Erlikosaurus bones in 1980, establishing the new genus and species Erlikosaurus andrewsi.

7: Where did Erlikosaurus live?

Erlikosaurus was a Cretaceous dinosaur that existed in Asia. Its fossils have been discovered in Mongolia’s Bayan Shireh Formation.

8: When was the Erlikosaurus alive?

Erlikosaurus was a herbivorous theropod dinosaur genus that existed between 99 million and 89 million years ago in Asia during the Cretaceous epoch.

9: What kind of climate did Erlikosaurus inhabit?

Although little is known about Erlikosaurus’ environment, research suggests that it lived in terrestrial areas with a semi-arid climate and lakes and rivers.

10: What was Erlikosaurus’s height and weight?

Erlikosaurus was estimated to measure roughly 3.4 metres long (11ft). These dinosaurs were estimated to weigh between 150 and 250 kilogrammes (330 to 550 lb).

11: How many teeth does a Erlikosaurus have?

The Erlikosaurus’ skull resembles that of several of the larger plant-eating dinosaurs. Its teeth are tiny and leaf-shaped, making it more suited to eating plants rather than meat. Its toothless beak, which resembles that of a bird, is particularly intriguing.

Erlikosaurus had teeth that were the same size on both sides. It probably ate plants with its beak and the muscles in its neck, and its food was broken down in its stomach.

12: What dinosaurs did Erlikosaurus live with?

Therizinosaurs, tyrannosaurs, ceratopsians, hadrosaurs, ornithomimosaurs, troodontids and pterosaurs were some of the other animals that existed around the same period and region.

13: Why is the finding of Erlikosaurus significant?

Segnosaurus was a near relative of Erlikosaurus. Erlikosaurus is the only segnosaurian to have been discovered with a skull, making it a very noteworthy species. Unfortunately, only a small portion of the skeleton was found.

In comparison to other dinosaurs, palaeontologists discovered that Erlikosaurus had superior senses of smell, hearing, and balance, and was also quite intelligent. Even if Erlikosaurus was a herbivore, it nevertheless possessed predatory sensory abilities. The findings raise problems regarding the evolution of the senses and the possibility of sensory regression. In this situation, it is possible that Erlikosaurus inherited its intelligence from its predatory predecessors.