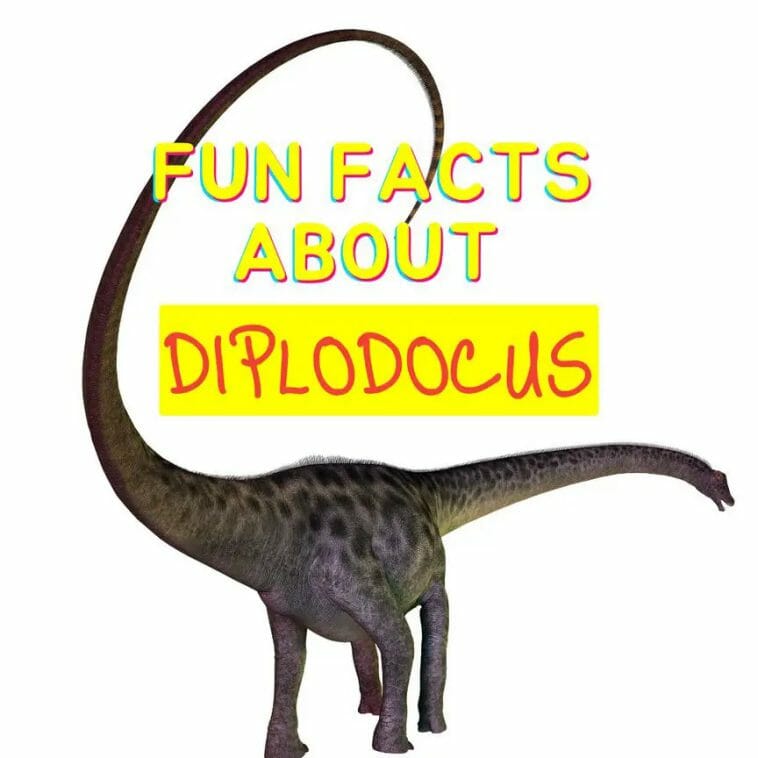 One of the first sauropod dinosaurs to be discovered and named was the North American Diplodocus. Diplodocus was a large dinosaur that lived 150 million years ago in Late Jurassic North America.

Diplodocus possessed a long neck, which it used to reach high and low vegetation as well as sip water. There has been some discussion about how someone with such a long neck would have held it. Learn some more interesting facts about the Diplodocus.

Contents for Fun Facts about Diplodocus

Name: Diplodocus (Greek for “double beam”); pronounced DIP-low DOCK-us
When it lived: Late Jurassic, 155-145 million years ago
Type of dinosaur: Sauropod
Location: USA
Habitat: Natural forested floodplains and densely vegetated wetlands, as well as seasides, wooded areas, and lakes.
Length/Weight: 26 meters/15000kg
Diet: Herbivorous
Distinguishing Characteristics: A small, horse-like head and a very small brain, as well as two rows of bones on the bottom of its tail to give extra support and mobility.
Named by: Marsh (1878)

2: What does the name Diplodocus mean?

Diplodocus was named in 1878 by palaeontologist Othniel C. Marsh, who derived the name from the Greek words “diplos,” which means “double,” and “dokos,” which means “beam,” in reference to the double-beamed chevron bones present on the underside of the tail, which were regarded as remarkable at the time.

3: How do you pronounce ‘Diplodocus’?

Diplodocus dinosaur, also known as the Dippy and Diplodocus longus, is a sauropod dinosaur whose name is pronounced “DIP-low DOCK-us.”

4: What is the nickname of Diplodocus?

In the latter days of the American Old West, a Diplodocus skeleton was unearthed in 1899 at Sheep Creek, Albany County, Wyoming, USA. It was on July 4th, Independence Day, that the Carnegie team gave the dinosaur its original nickname, ‘The Star Spangled Dinosaur.’ However, as expected, this new species was later named Diplodocus carnegii.

5: What did Diplodocus eat?

Diplodocus was a plant-eating dinosaur that only ate plants. Its tiny teeth, aligned like a rake, assisted them in stripping leaves from gingko and fir trees. To survive on simply leaves, Diplodocus would have had to eat all day. Dippy had 42 teeth, but it’s expected that they replaced each tooth every 35 days, so they would have developed many more over their lifetime. Without this capacity, the dinosaur would have lost all of its teeth, as well as its ability to eat.

7: When was the Diplodocus first discovered?

In 1877, the first Diplodocus fossil was discovered near Canon City, Colorado. The first specimen was extremely incomplete, with just two complete caudal vertebrae, a chevron, and a few additional fragmented caudal vertebrae.

8: Where was Diplodocus found?

9: When was the Diplodocus alive?

Diplodocus flourished between 159 and 144 million years ago, during the Jurassic Period of Earth’s history. Diplodocus’s remains have been discovered across North America, particularly in Colorado, Montana, Utah, and Wyoming.

10: What kind of climate did Diplodocus inhabit?

The Diplodocus dinosaur is thought to have lived in a terrestrial environment within woods. They lived near natural floodplains with trees, swamps with lots of plants, seashores, wooded areas, and lakes.

11: What was Diplodocus’s height and weight?

Diplodocus carnegii was between 24 and 26 metres long and weighed roughly 15 tonnes (15000kg). Diplodocus had an 8-meter (26-foot) neck and a 14-meter (45-foot) tail. They were sauropods with whip-like tails that were incredibly lengthy.

12: How many eggs did Diplodocus lay?

There is no clear evidence of Dipolodocus’ nesting habits, but like other sauropods, it’s conceivable the dinosaur lay its eggs in a communal area with vegetation-covered shallow pits. For such big animals as Diplodocus, clutches and individual eggs were astonishingly small. Diplodocus, for example, is thought to have deposited eggs the size of footballs, buried in clutches of roughly 100 eggs.

13: What was Diplodocus known for?

Diplodocus was known for being the longest land-dwelling dinosaur for a long period. Diplodocus is the longest dinosaur with a nearly complete skeleton. It gets its name from the “double-beamed” structure of the bones on the underside of its massive tail. While there have since been further discoveries of even longer sauropods, many scholars believe they are Diplodocus’ direct relatives.

The Diplodocus was a herbivore that browsed the Jurassic flora, measuring as long as a city bus, moving on robust, trunk-like legs, and with a dazzling neck and tail. From its head to its tail, it is sometimes shown with a row of spines.

14: What dinosaurs did Diplodocus live with?

Diplodocus, along with other enormous sauropod dinosaurs, including Apatosaurus, Barosaurus, Brachiosaurus, Brontosaurus, and Camarasaurus, existed throughout the Middle to Late Jurassic epoch. It is thought that they inhabited the same location.

15: How did the Diplodocus protect itself?

It is possible that Diplodocus defended itself by striking out with its long tail at its opponents. It could move its tail with incredible velocity. Scientists constructed a model of its tail to illustrate that it could snap it like a whip.

Whether or not Diplodocus did this is still up for debate. But fossils of scales on its whip that look like spikes show that the animal probably used it as a weapon.

16: How did Diplodocus move?

Diplodocus has a unique body structure that included two rows of bones on the underside of its tail for further support and manoeuvrability. Diplodocus’ long neck was incredibly flexible, as we now know. This would have meant Diplodocus could have reached food high in the treetops and gotten a good meal by standing in one place and devouring everything within reach.

17: How many bones does a Diplodocus have?

Research showed that Diplodocus tails would have been raised high to balance the neck, so in 1993, Dippy’s tail was lifted off the ground. The 292 bones that make up Dippy were cleaned by experts at the Museum with special tools about every two years.

18: How fast can Diplodocus run?

19: Why is the finding of Diplodocus significant?

Fossils of Diplodocus at many different stages of growth are very important to the study of how dinosaurs grow and develop. Since Diplodocus grew to be more than 100 feet long, palaeontologists study them to try to figure out how they got so big. This research could also help us understand how reptiles got to be so big and how they came to rule the animal world.

Diplodocus was also a very important part of getting people interested in dinosaurs. During the golden age of dinosaur discoveries in the late 19th century, hundreds of species were found, and palaeontologists worked hard to put all of their findings into groups and give them names. With the help of people like Andrew Carnegie, fossils and moulds of Diplodocus were put together so they could be shown in museums all over the country. This display of Diplodocus made people want to learn more about dinosaurs, which led to funding and more discoveries.