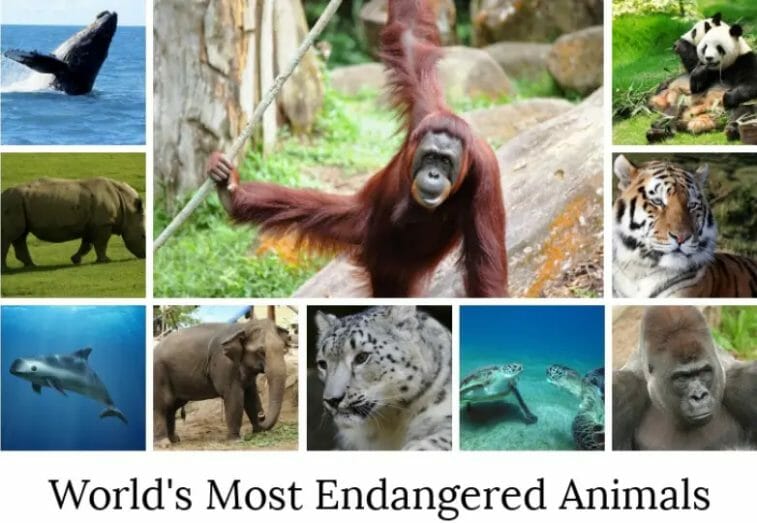 Numerous countries have enacted legislation to safeguard species that rely on conservation, including prohibitions on hunting, restrictions on land development, and the establishment of designated conservation zones. Extensive conservation efforts are being conducted to ensure the survival of certain endangered species, including captive breeding and habitat restoration.

Continue reading to discover about some of the most amazing creatures in desperate need of our assistance, protection, and conservation.

Contents for Top 10 Most Endangered Animals

Giant pandas are found mostly in temperate woods in southwest China, where bamboo is their primary source of food. They must consume between 26 and 84 pounds of bamboo every day, depending on the type of bamboo they are eating. For millions of years, the giant panda has been a resident of bamboo forests. Because of its particular characteristics, it is an extremely specialised mammal. Despite its thick coat, the panda is able to stay warm in its natural habitat. Large molar teeth and powerful jaw muscles that allow giant pandas to eat bamboo with ease. A lot of people find big pandas adorable, yet they’re just as dangerous as any other bears. There are still threats to pandas despite their elevated position and lack of natural predators. Just over 1,800 pandas remain in the wild due to human threats.

Despite a century of decline, the global population of wild tigers is beginning to rebound. It appears that tiger numbers in India, Nepal, Bhutan, Russia, and China are either steady or growing. As many as 3,900 tigers are still left in the wild, but much more must be done if we are to ensure their survival in the wild. Tigers are still in peril in various locations, including much of Southeast Asia.

It is possible to find Bengal tigers as well as Indochina tigers as well as Sumatran tigers and Malayan tigers. The International Union for the Conservation of Nature’s (IUCN) Red List of Threatened Species lists tigers as “Endangered” over the globe.

The Malay word for orangutan is “man of the forest.” While living in the lowland forests of their habitat, orangutans lead solitary lives. Wild fruits including lychees, mangosteens, and figs, as well as tree-hole water, are their primary sources of nutrition. For both sleep and repose, they build nests in the branches of trees and other vegetation.

Orangutans are the world’s biggest arboreal animal, spending most of their lives in the trees and known for their striking red fur. In order to get through the branches they have long, muscular arms and gripping hands and feet. The great apes share 96.4 percent of our DNA and are one of the most intelligent animals in the world.

Elephants, the world’s largest land mammal, are intelligent, sociable, and critical to their ecosystems. Asian elephants are slightly smaller than their African relatives and are indigenous to India and Southeast Asia. Elephant numbers have declined significantly over the previous century in Africa and Asia, where they were once widespread. Asian elephants face the biggest threat from habitat degradation and the associated human-elephant conflict.

Gorilla populations in the Congo Basin have been falling for decades, and according to a 2010 United Nations study, they may be extinct in large parts of the basin by the mid-2020s.

At the beginning of the 20th century, there were an estimated 500,000 rhinos throughout Africa and Asia. There were 70,000 rhinos in the wild in 1970, and today there are only about 27,000 of them. There are three rhino species that are in risk of extinction: the black rhino, the Javan rhino, and the Sumatran rhino. There is currently only one national park in Indonesia where Javan rhinos may be found, and that is on Java’s northernmost tip. Poaching and habitat destruction have decimated the rhino population outside of protected areas for decades.

One of the most endangered species of marine animal is the vaquita. The Vaquita can only be found in a small area of the northern section of the Gulf of California, Mexico , with about 10 individuals remaining. At just over 100 pounds and a length of approximately 4-5 feet (1.2-1.5 metres), it’s the smallest known cetacean (whale, dolphin, or porpoise) in existence today (45 kg).

Illegal fishing for totoaba, a huge fish prized for its swim bladder, is the greatest threat to vaquitas. Totoaba gillnets entangle vaquitas and they drown because they are unable to swim to the surface for air.

Snow leopards have developed to survive in some of the hardest circumstances on the planet, such as in the Himalayas. White-gray coats with huge black rosettes fit in wonderfully with Asia’s steep and rugged, high mountains. Snow leopards are commonly referred to as the “ghosts of the mountains” because of their extraordinary ability to blend in with their surroundings.

A genetic analysis has revealed that the snow leopard is more closely related to the tiger than previously assumed. There are likely less than 6,500 of these animals surviving in the wild, but data is difficult to come by because to the species’ penchant for inaccessible hilly habitat and its elusiveness.

Sea turtles are a living example of a group of reptiles that have roamed our oceans for more than 100 million years. Turtles have a great deal of cultural and tourist significance, as well as a substantial economic value. Our oceans are home to seven species of sea (or marine) turtles. Of the seven species, five can be found in tropical and subtropical waters all over the world.

Almost all seven of the world’s sea turtle species are listed as threatened or extinct, largely as a result of human activity. It is the most common threat to sea turtles to get caught by fishing gear and die. Additionally, they are hunted and over-exploited in order to obtain their eggs, flesh, skin, and shells, all of which are highly sought for by humans. The breeding sites and eggs of sea turtles are also affected by climate change.

Whales use their mysterious noises to communicate with one another across the world’s waters. The blue whale is the biggest creature on the planet, weighing up to 200 tonnes (approximately 33 elephants). Despite their watery habitat, whales are lungs-breathing creatures. They are warm-blooded creatures that nurse their young in the same way as humans do. They are protected from the cold of the ocean’s surface by a thick layer of fat called blubber.

As of 2018, the global population of mature blue whales was estimated to be between 5,000 and 15,000 individuals. The only known natural threat to blue whales is the killer whale. The International Whaling Commission banned the hunting of blue whales worldwide in 1966.