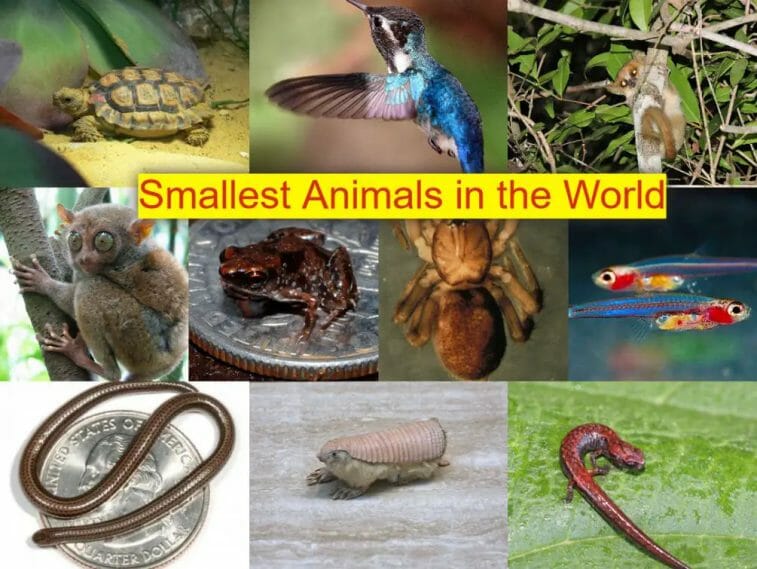 We live in a world full of intriguing species that you may not even be aware of. There are a wide variety of habitats in which little creatures can thrive. All of us have our own preferences when it comes to the climate. Even the tiniest creatures can be found in both water and on land!
Humans are a relatively large species compared to the small size of many creatures in the world. There are some small animals, even smaller than the human hand. This article highlights some of the smallest animal species in the world.

Contents for Smallest Animals in the World

In terms of turtle species, the Speckled Padloper Tortoise is the smallest. Chersobius signatus is the tortoise’s scientific name. Located in South Africa’s Little Namaqualand region, the animals can be observed perched on rocky outcroppings. On average, male speckled padlopers are 70 mm long, while the female is around 100 mm long. The IUCN red list classifies these tortoises as endangered, and their populations are quickly diminishing in the wild. These tortoises are in danger because of traffic on roadways, habitat deterioration, and pet trade hunting. For this species, the most common predation comes from dogs, birds, and pigs. Humans brought these dogs and pigs into the habitat of the speckled cape tortoise, which means they are not native to the area.

The bee hummingbird, the world’s tiniest bird, is only found in Cuba. This bird’s scientific name is Mellisuga helenae. The Bee Hummingbird is between 55 and 61 millimetres in length and weighs less than two grammes. Birds’ wings can flap up to 200 times per second. The body of the bird is splattered with brilliant blues, reds, and oranges. The hummingbird feeds on nectar by rapidly moving its tongue in and out of its mouth. A single day, the bee hummingbird can visit up to 1,500 flowers.

Tetracheilostoma carlae is the scientific name for the Barbados threadsnake. It is the world’s smallest snake species, located on the Caribbean islands of Barbados, Barbuda, and Antigua. In 2008, the snake was classified as a distinct species for the first time. The snake is about 100 mm long and eats only termites and ant larvae. This snake species’ female only lays one big egg at a time.

Madame Berthe’s Mouse The lemur, scientifically known as Microcebus berthae, is the world’s smallest primate. The mouse weighs roughly 30 grammes and measures 92 mm in length. This nocturnal primate is only found on the island of Madagascar. These omnivores eat alone and mostly graze on the fruits and flowers of various tree and shrub species, insect secretions, gum, arthropods, and tiny vertebrates such as geckos and chameleons.

The Paedocypris fish, whose scientific name is Paedocypris progenetica, is the smallest fish in the world. An adult fish is 7.9 mm. the fish is found in wetlands in the Indonesian islands of Borneo, Sumatra, and Bintan. The Paedocypris fish do not have a complete skull and leave parts of their brain with no bone cover.

Microhexura montivaga is the scientific name for the Spruce-fir moss spider. It is the world’s smallest animal, measuring about 3 to 4 millimetres in length. This spider can be found in the Appalachian Mountains of the United States. Spruce-fir moss spiders build tube-shaped webs, which appear to be for refuge because no prey has been found in them. It most likely feeds on springtails, which are abundant in moss mats.

The scientific name for this frog is Paedophryne amauensis. This is the smallest frog with measurements of 7.7 mm in length. The frog was first discovered in guinea in 2009. They camouflage in leaf litter on the floor of tropical forests, making it difficult to spot them.

The scientific name for this salamander is Thorius arboreus. They are found on the forest floors in Oaxaca, Mexico. The salamanders have outstanding big eyes and are the smallest reptile. They are approximately 17 mm long. It can endure minor habitat deterioration as long as there is still enough shade. Agriculture and logging are the two main dangers it faces.