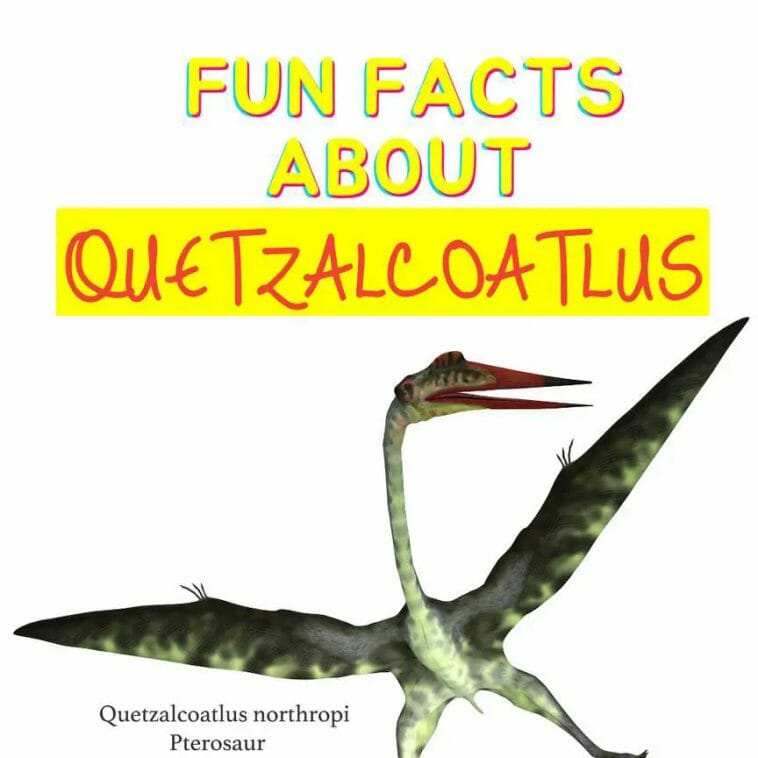 Its fossilised remains, which were unearthed in the 1970s and revealed an astonishing 40-foot wingspan, belonged to the ancient pterosaur group of flying reptiles. Despite the fact that it was clearly the world’s largest flying creature, how it flew remained a mystery until now.

Continue reading to get more amazing facts about Quetzalcoatlus.

Contents for Fun Facts about Quetzalcoatlus

There were no feathers on the Quetzalcoatlus. They were covered in scales as opposed to fur. The recovered fossil in its entirety demonstrates that these creatures were enormous, with a wing span of up to 45 feet (13.7 meters). Similar to a modern stork, Quetzalcoatlus possessed a long, pointed beak without a hook at the tip.

The animal’s head was employed to regulate its motions and perform abrupt bends. Their bones were hollow and light despite their massive size. This made it possible for them to take flight. The Quetzalcoatlus skull reveals that they had toothless jaws and hence swallowed their food.

3: What does the name Quetzalcoatlus mean?

Quetzalcoatlus got its name from the Aztec god Quetzalcoatl, whose name means “God of the Feathered Serpent.” Despite the fact that these creatures lacked feathers and only had scales, the moniker was apt because to their enormous size and exceptional hunting abilities. This beast, which dates back to 500 A.D., was depicted in many Central American mythologies.

4: How do you pronounce ‘Quetzalcoatlus’?

The name Quetzalcoatlus is pronounced ‘Kwet-zal-koh-at-lus.’

5: Was Quetzalcoatlus a kind of dinosaur?

Quetzalcoatlus was a flying reptile, not a dinosaur. Quetzalcoatlus northropi is the largest flying animal known to have ever existed. It was a member of the pterosaur family. It existed alongside dinosaurs and preyed upon them.

6: What did Quetzalcoatlus eat?

Quetzalcoatlus skeletons demonstrate that they were vicious predators with toothless jaws and keen claws who hunted down creatures, including little dinosaurs. In flight, their huge wings assisted them in launching an attack and chasing down their victim.

Aside from being able to fly, these creatures were also adept at hunting on land. They hunted for fish in shallow water areas. These pterosaurs may have snatched fish off the water’s surface due to a lack of jaws. They also ate worms, crabs, and other invertebrates from the ground, using their folded wings as legs. Their diet resembled that of a full-fledged carnivore.

In 1971, Douglas A. Lawson, then a geology graduate student at the Jackson School of Geosciences at the University of Texas at Austin, discovered the first Quetzalcoatlus fossils in Texas, United States, from the Maastrichtian Javelina Formation at Big Bend National Park, dated to approximately 68 million years ago.

8: Who named the Quetzalcoatlus?

9: Where did Quetzalcoatlus live?

Quetzalcoatlus fossils were unearthed at Big Bend National Park in Texas. However, some Quetzalcoatlus dinosaur skeletons were discovered in Senegal in Africa, Alberta in Canada, and Jordan in the Middle East.

10: When was the Quetzalcoatlus alive?

Quetzalcoatlus lived throughout the Late Cretaceous epoch, with other pterosaurs and dinosaurs from different clades such as sauropods and theropods. During the Late Cretaceous epoch, these flying reptiles went extinct along with other predatory creatures such as T. Rex. Large pterosaurs ruled the land as well as the air during this time period, hunting down terrestrial species.

11: What kind of climate did Quetzalcoatlus inhabit?

Quetzalcoatlus was a flying reptile whose fossils were unearthed in Texas. Texas’ habitat was a large wetland during the Cretaceous period. At the time, the swamp stretched all the way across North America, following the Western Interior Seaway all the way to Canada and beyond. In other regions of this prehistoric marsh in Alberta, Canada, related pterosaurs have been discovered.

12: What was Quetzalcoatlus’s height and weight?

Quetzalcoatlus northropi had a wingspan of 40 feet, which was about the same as a typical city bus, according to the Carnegie Museum of Natural History. Quetzalcoatlus was the largest flying dinosaur known, standing 12 feet long and weighing up to 500 pounds.

13: Is it possible for a Quetzalcoatlus to eat a human?

Fossils of Quetzalcoatlus reveal that some of them had wingspan of up to 52 feet (15.9 meters). Contrary to pteranodons, a quetzalcoatlus would be able to consume a human if it so desired. It is believed that Quetzalcoatlus consumed more than just fish.

14: How did Quetzalcoatlus move?

Quetzalcoatlus walked on two legs, making it a bipedal creature. Its wings, however, could not avoid contacting the ground when folded due to its extended forelimb bones. This four-legged stance suggested to some that pterosaurs walked like vampire bats, which utilise their forelimbs to propel themselves forward.

However, an analysis of the bones indicates that the pterosaur’s wings could not have been employed for propulsion. When grounded, their wings could only move forward or to the side.

Quetzalcoatlus avoided tripping by raising its left arm, advancing its left leg one step, and placing its left hand on the ground. The movement was repeated with the right limb, which consisted of the following steps: the right arm was raised, the right leg moved forward and positioned the right foot, and then the right hand moved downward.

15: How fast can Quetzalcoatlus fly?

Paleontologists discovered that the Quetzalcoatlus flew at a speed of 80 mph (130 kph) for 7 to 10 days at altitudes of 4,600 m after conducting thorough research on the bones. In the skies, the maximum flight range is 13,000–19,000 kilometres (8,000–12,000 mi). When they landed on the earth, they may have walked using both their wings and hind legs. They were able to fly at such high altitudes thanks to their hollow bones.