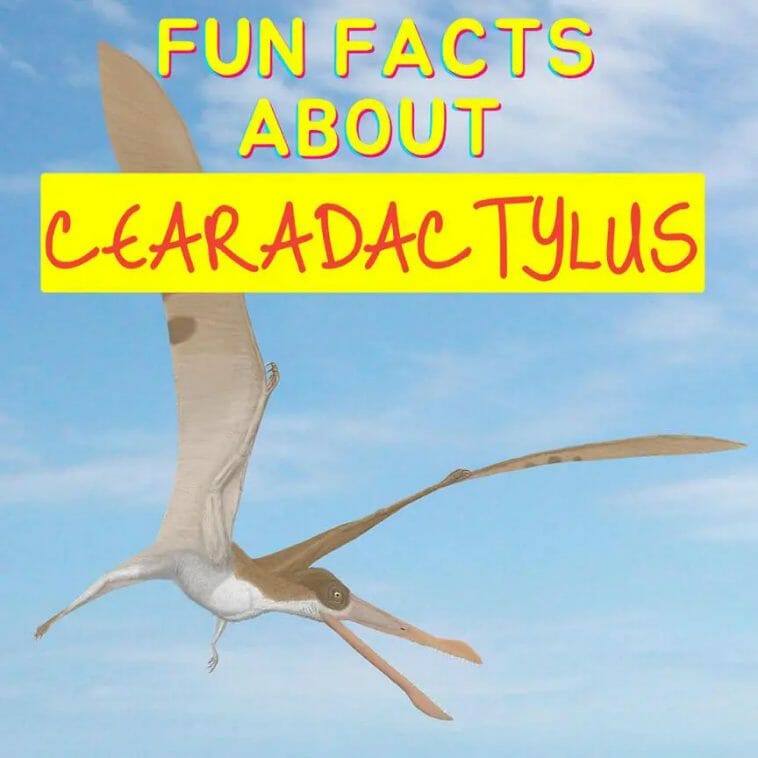 Cearadactylus was a huge pterosaur from Brazil’s Santana Formation. It had a wing membrane stretched between its torso and the massively extended fourth finger, as did all pterosaurs.

Cearadactylus had a 4–5.5 metre wingspan but probably weighed just 15 kg. Despite its light weight, researchers believe Cearadactylus could only glide. Its long front teeth allow it to capture and keep fish.

Contents for Fun Facts about Cearadactylus

2: How do you pronounce ‘Cearadactylus’?

3: What does the name Cearadactylus mean?

This species’ name, Cearadactylus Atrox, derives from Greek and Latin languages. The Greek name ‘Dactylus’ means ‘finger,’ whereas the Latin phrase ‘Atrox’ means ‘terrified.’ The term “finger” is a reference to the dinosaur’s finger wing. It belongs to a distinct group of pterosaurs that Giuseppe Leonardi and Guido Borgomanero designated.

Researchers Leonardi G and Guido Borgomanero were able to determine, based on the recovered specimen, that their formidable jaw was embedded with sharp interlocking teeth. This enabled them to capture and retain fish. In addition, a long snout and enormous wings were supposed to be present.

Due to their hollow bones, their 33-pound (15-kilogram) body was able to lift off the ground. The skull measured around 0.57 metres in length and lacked a crest. In Berlin’s Mitteilungen Museum für Naturkunde, a rough replica of a dinosaur is on display.