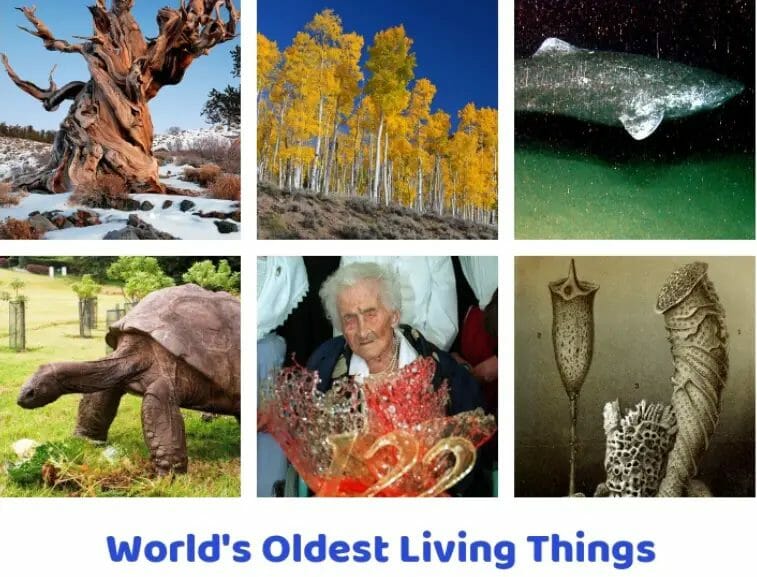 There are many types of living things in the world, but some are much older than others. There are many candidates for this title. And, surprisingly enough, some of them are trees! Trees like the Bristlecone Pine and the Coastal Redwood can grow for thousands of years and still survive. These long-lived trees share their secret to longevity with other organisms too: they face adversity and change by adapting to new environments. Here, we explore these remarkable trees and others like them that demonstrate an ability to adapt through the ages.

Contents for The Oldest Living Things in the World

Colonies of Clonal Plants and Fungi

One of the world’s largest stands of quaking aspen trees, the Trembling Giant, or Pando, is a living organism that takes the concept of a forest as a whole and turns it into reality. A single root system connects the grove’s roughly 47,000 trees. Each tree is genetically identical.

Quaking aspens, on the other hand, typically reproduce asexually, by sprouting new trees from the parent’s broad lateral root. All of the trees are part of one giant clone, thus they don’t exist as separate entities.

Utah State University ecologist Paul Rogers believes that the Trembling Giant is in jeopardy. Even when the mature Pando stems wither and die due to the perennial insect and drought challenges, the organism’s regeneration roots are under attack. For Rogers, the lack of juvenile and young stems to replace the ageing ones was due to deer and elk overgrazing. The Trembling Giant faces a catastrophic sudden withering and shrinkage if it does not receive new growth to replace the old.

To put this in perspective, the oldest tree in the world, the Populus tremuloides (quaking aspen), grows in south-central Utah and is thought to be more than 14,000 years old. It’s worth noting that unlike many other clonal “colonies,” this one has a single huge underground root system connecting all of its trees together.

It’s estimated that the oldest living item on Earth is a gnarled tree in the Californian White Mountains. Over 4,800 years, this Great Basin bristlecone pine (Pinus longaeva) has endured strong winds, frigid temperatures, and little rain. Back when it initially appeared, neither the Pyramids nor the Great Stonehenge had yet been constructed. To avoid damage from tourists, scientists have kept the exact location of the tree a secret.

Pine rings from the 4,853-year-old Methuselah in California’s White Mountains were counted by scientists. Methuselah is thought to have germinated in the year 2833 BC, making it older than Giza’s Great Pyramid, which was finished in the year 2600 BC.

Other Terrestrial and Pagophilic Animals

Tortoises, which have an average longevity of 150 years, are among the planet’s longest-living animals. Jonathan, a 189-year-old Aldabra giant tortoise on the island of St. Helena in the South Atlantic Ocean, was one of its oldest known examples. Jonathan is a large tortoise native to the Seychelles. His age of 189 makes him the world’s oldest land mammal, according to Guinness World Records.

Aside from a few age-related ailments, Jonathan the Tortoise has lived well beyond his average lifetime of 150 years, according to his veterinarian. He has cataracts in both eyes and may be completely deaf in the sense of smell, but he has excellent hearing.

Glass sponges from the East China Sea and the Southern Ocean are thought to be over 10,000 years old, according to recent research. Even if the estimate is off, it’s safe to say that this is the longest-lived animal yet discovered.

Only a few species of glass sponge have been discovered, and those that have mostly reside in the 1,480 to 2,950 feet of water below the surface of the ocean. Glass sponges have the ability to form reefs and bioherms via fusing.

It had been thought that the Greenland shark might live up to 200 years, but a study released in 2016 indicated that a specimen measuring 5.02 metres (16.5 feet) could be as old as 272 years or even more. As a result, the Greenland shark is now the record holder for the longest-living vertebrate ever recorded.

Because of the high amounts of trimethylamine oxide present in the flesh of the Greenland shark, its meat is poisonous (TMAO). If the meat is consumed without preparation, the absorbed TMAO is converted into trimethylamine, which has consequences akin to being extremely intoxicated.

It is estimated that the average human lifespan is around 70 years. An elderly French woman named Jeanne Calment died at 122 years and 164 days old, making history’s oldest person. The oldest known man, Jiroemon Kimura, passed away on June 12th, 2013, at the age of 116 years and 54 days.