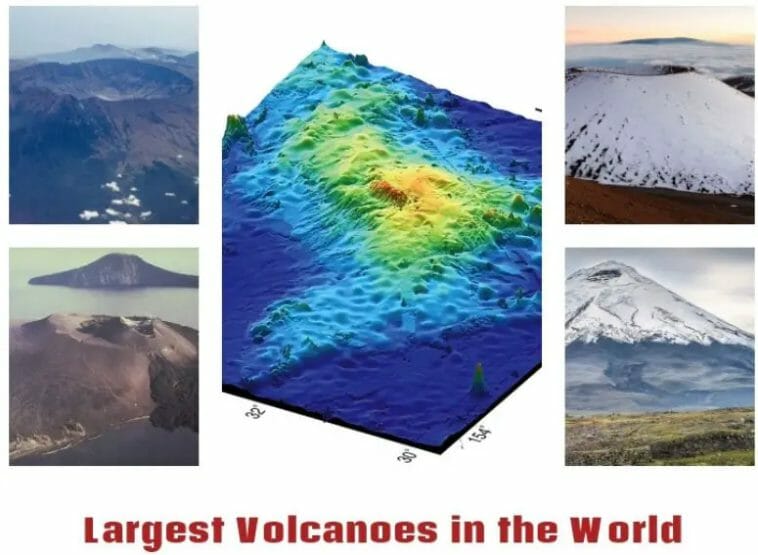 There are a lot of volcanoes all over the world. Some are active, some inactive, and some extinct. But how do you know which one is the biggest? It’s hard to choose only one. The Krakatau eruption in 1883 was considered to be the most powerful eruption in recent history. But there are also other biggest volcanoes that have made their mark on history. And then there are volcanoes that may not be as popular, but still very important for their regions or countries.

Here are five of the world’s largest volcanoes, in no particular order.

Contents for Biggest Volcanoes in the World


Tamu Massif has the largest volcanic footprint of any volcano, covering nearly 120,000 square miles (310,800 square kilometres), roughly the size of New Mexico. It’s also bigger than any other single volcano on the planet. Instead of being a volcano complex with many vents, it is now classified as a single volcano.

Tamu, on the other hand, is only 2.5 miles (4 kilometres) tall, which is very normal for volcanoes. Tamu is no longer alive and Its most recent eruption occurred approximately 144 million years ago.

Other characteristics can be found on Mauna Kea’s summit. It is also home to the world’s largest astronomical observatory, in addition to being the summit of the world’s tallest mountain. The observatory, which is over 14,000 feet above sea level, is above 40% of the Earth’s atmosphere. Above the mountain, the air is exceedingly dry and devoid of clouds. As a result, it’s an excellent position for an observatory.


The highest active volcano on the planet is Nevados Ojos del Salado. It’s about 20 kilometres south of the route that connects Argentina and Chile at Paso de San Francisco on the Chilean side of the border. It stands at a height of 22,615 feet (6893 meters).

It is also the highest mountain in Chile, the second tallest in the Western Hemisphere, and the second highest in the Southern Hemisphere. Ojos del Salado is still active and producing fumarolic activity, however there have been no documented historical eruptions. The most recent activity occurred in 1993, when a modest gas and ash release was reported by locals but not confirmed by a volcanologist.

4: Mount Tambora (The deadliest and largest volcanic outburst ever recorded)


Mount Tambora is on Sumbawa, Indonesia, which was part of the Dutch East Indies. Mount Tambora’s 1815 eruption was the deadliest volcanic eruption in recorded history, which resulted in a year without a summer, crop failure, and the deaths of over 100,000-200,000 people. In total, the eruption expelled 160–213 cubic kilometres (38–51 cu mi). It is the most recent known and confirmed VEI-7 eruption.

Despite a severe peak on April 10, 1815, increasing steaming and tiny phreatic eruptions continued for six months to three years. The ash from the eruption column diffused globally, lowering temperatures in 1816, the Year Without a Summer. This brief era of major climate change caused harsh weather and crop failures globally.

5: Krakatoa (Krakatoa’s eruption was the loudest ever recorded)


One of the world’s most famous volcanoes is Krakatau, a small island group in the Sunda Strait between the islands of Sumatra and Java. It’s a mostly submerged caldera with three rim islands and a new cone, Anak Krakatau, which has been producing a new island since 1927 and is still very active.

Krakatau erupted dramatically in 1883, killing over 30,000 people (mostly by the huge tsunamis triggered by the eruption). The Krakatoa eruption was the loudest ever recorded. The explosions were so loud that they could be heard in Perth, Western Australia, and Rodrigues, Mauritius, 4,800 km away. The sound was claimed to be heard in 50 countries and had travelled seven times around the world.