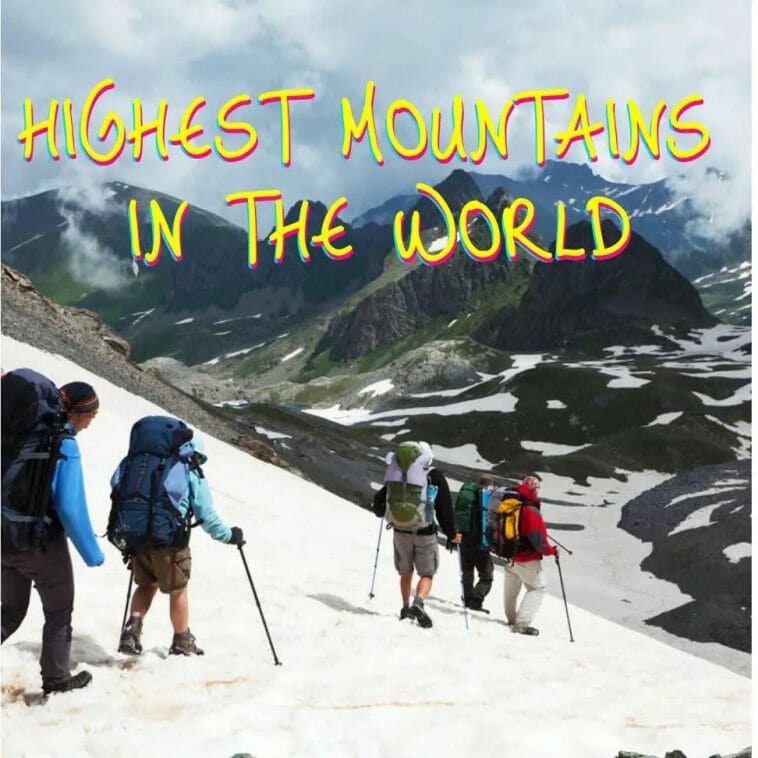 Contents for Highest Mountains in the World

Mount Everest is the world’s highest mountain. The height of the mountain is about 8,848.86 meters. This mountain is situated in the Mahalangur Himal in Northeast Nepal and in the south-central Tibet of China. The border between China and Nepal runs across the summit of Mount Everest. The local name for the mountain in Tibet is Chomolungma, which means the Goddess Mother of the World or Goddess of the Valley. The mountain was established as the highest mountain in 1852 by the governmental survey of India.

The mountain was first climbed by Sir Edmund Hillary and Tenzing Norgay in 1953. There are two climbing routes for climbers of Mount Everest. The first is the standard route, which approaches the summit from the southeast in Nepal, and the second route approaches the summit from the north in Tibet. Dangers associated with climbing Mount Everest include altitude sickness, bad weather, strong wings, hazards from avalanches, and the Khumbu icefall, which is considered the most dangerous.

K2 is the second-highest mountain in the world, with a height of 8,611 meters. The mountain lies in the Karakoram range on the borders of China, India, and Pakistan, as well as Gilgit-Baltistan and Kashmir in India. The local name for the mountain is the Savage Mountain, named after George Bell of the 1953 American expedition, who told reporters that the mountain is savage and that it tries to kill a person.

K2 mountain was discovered in 1856 by Colonel T.G. Montgomerie of the Survey of India. At the time, it did not have a local name and was named K2, a symbol of its status as the second-highest peak in the Karakoram range. Two Italians, Compagnoni and Lacadelli, on July 31st, 1954, were the first people to reach the summit of K2 Mountain.

K2 is the deadliest mountain in the world and the toughest to climb due to the lack of Sherpas, support, fixed ropes, and routes on the mountain. The mountain also has many avalanches and unpredictable weather. About 87 climbers have died trying to climb K2 Mountain since 1954.

This is the third highest mountain in the world, standing at 8,586 meters. Kangchenjunga can also be written as “Kanchenjunga” or “kinchinjunga”. The peak is located in the Kangchenjunga Himal and is flanked on the west by the Temur River, on the north by Lhonak Chu and Jong sang La, and on the east by the Teesta River. The Kangchenjunga Mountain has five peaks, with one peak in India, one in Nepal, and three peaks along the border between the two countries.

Lhotse is the 4th highest mountain in the world, with a height of 8,516 meters. The name Lhotse, in the local Tibetan language, means the south peak. The mountain borders Nepal and China and is the closest to Mount Everest. Lhotse has three summits.

Makalu mountain stands at 8,485 metres and is located in the Mahalangur Himalayas on the border of Nepal and the Tibet Autonomous Region in China. The mountain is situated 19 km from Mt. Everest on the south-east side. The mountain has a four-sided pyramid shape and has two peaks. The Kangchungtse summit is about 3 km northwest of the main summit.

The first people to reach the summit of Makalu Mountain were members of a French expedition with Jean Franco as the team leader. This record was set on May 15th, 1955. The mountain has very steep sides covered in glaciers, making it difficult to climb. Two hundred sixty people have successfully climbed the mountain to date, and 22 deaths have occurred while climbing the Makalu mountains.

Cho Oyu is the sixth highest mountain and the last in the Everest region. The mountain stands at 8,188 metres above sea level. The phrase “Cho Oyu” in Tibetan means the turquoise Goddess. Cho Oyu mountain is located on the China-Nepal border and is in the far west of the Khumbu sub-section of the Mahalangur Himalaya. Cho Oyu is only 20 km from Mount Everest.

Cho Oyu is considered the easiest to climb among the over 8,000 meter-tall mountains. This is because of the mountain’s gentle slopes and thin air at the top. There have been about 3,138 recorded successful climbs and about 44 deaths, which adds up to only a 1.4% death rate.

Cho Oyu mountain was first climbed by Herbert Tichy, Joseph Jochler, and Sherpa Pasang on October 19th, 1954. The team was on an Austrian expedition. The mountain was the fifth of the 8,000-meter peaks to be climbed, with Annapurna as the first, followed by Mount Everest, Nanga Parbat, and K2.

The seventh tallest mountain is Dhaulagiri, at a height of 8,167 meters. Dhaulagiri is in Nepal and extends from the Kaligandaki River west to Bheri, and is bounded by tributaries of the Bheri River on the north and southwest. On the southeast, the mountain is bordered by the Myagdi Khola river. K2 is the parent mountain of Dhaulagiri peak.

Dhaulagiri was first climbed on May 13th, 1960 by Kurt Diemberger of the Austrian expedition, Peter Diener, Nawang Dorje, Ernst Forrer, and Albin Schelbert. There have been 234 successful recorded climbs and 26 fatalities. Dhaulagiri is one of the most beautiful mountains and is popular for its visibility on the Annapurna Circuit.

Also known as Kuang, Manaslu is the eighth tallest mountain in the world, standing at 8,163 meters. The mountain is located in Nepal, in the Mansiri Himal of the Nepalese Himalayas. Manaslu meant “a mountain of spirits” in Nepalese and was derived from the Sanskrit word Manasa, which means intellect or soul. The parent mountain for Manaslu is Cho Oyu.

It is difficult to climb, with more than 60 recorded deaths on its treacherous slopes. The first people to climb Manaslu were Gyalzen Norbu and Toshio Imanishi of the Japanese Expedition on May 9, 1956.

Nanga Parbat, also known as Diamer in Tibet, is the second most prominent peak in the Himalayas after Mount Everest. The mountain stands at 8,126 metres and is located in the Diamer district of Gilgit-Baltistan in Pakistan. Nanga Parbat means “naked mountain” in Sanskrit. Nanga Parbat has the highest mountain face in the world, called the Rupal, which is about 4,600 metres above the base of the mountain. The Dhaulagiri is Nanga Parbat’s parent mountain.

The first person to climb Nanga Parbat was Hermann Buhl, an Austrian climber on the Austrian-German Expedition on July 3rd, 1953. The mountain is considered difficult to climb because of its steep slopes.

Annapurna in Nepal is the tenth-tallest mountain in the world. The mountain stands at 8,091 metres above sea level. Kali Gandaki Gorge borders the mountain on the west, the Marshyangdi river on the east and north, and the Pokhara valley on the south. The parent mountain for this peak is the Cho Oyu.

Annapurna is among the deadliest mountains to climb as it is covered in snow throughout the year and receives high-velocity wind and snowfall. About 43 people were killed in October 2014 as a result of snowstorms and falling in avalanches.

Annapurna I was the first 8,000 metres (above the mountain) to climb successfully. The ascent was achieved by a French expedition led by Maurice Herzog in 1950.