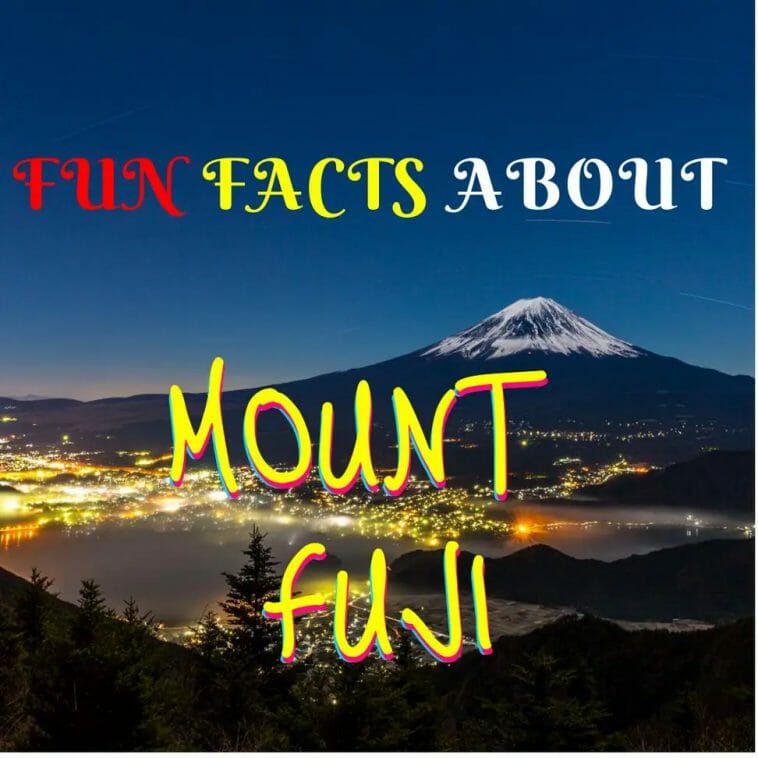 Mount Fuji consists of three volcanoes. Three different volcanoes are stacked on top of one another. Fuji sits atop Komitake and Kofuji, and it’s the most recent layer of a volcano. The elevation of 3,776 metres on Mt. Fuji makes it Japan’s tallest peak (12,380 feet).

Mount Fuji’s most recent documented eruption occurred in 1707, and it was the volcano’s largest recorded eruption ever. On October 26th, 1707, many minor earthquakes were felt near Mt Fuji after a massive 8.4 magnitude earthquake devastated Honshu island.Ash dropped 280 km away from the volcano on the south Kanto plain and Tokyo. The total volume of magma erupted during the 16 days was 0.68 cubic km. The eruption lasted until December 25-27, when it slowed and terminated on January 1st, 1708.

3: Mount Fuji is an active volcano.

Mount Fuji is an active volcano that rests on a triple junction of tectonic activity, where the Amurian, Okhotsk, and Philippine plates meet. It may appear to be a calm and sacred spot, but it is actually an active volcano.
Since 781 AD, or the beginning of recorded history, Mount Fuji has erupted more than 15 times. Nonetheless, Mount Fuji has been dormant for over 300 years, since its last eruption in 1707. Its last reported volcanic activity was in the 1960s.

4: It is both a sacred mountain and a symbol of Japan.

Mount Fuji has been a sacred spot for Shintoists since the 7th century, with many shrines at the base and summit dedicated to the goddess Sengen-Sama. Along with Mount Tate and Mount Haku, it is one of Japan’s three sacred peaks.
Mount Fuji has long been regarded as one of Japan’s most famous and enduring emblems, contributing to the country’s cultural and spiritual landscape. The peak has been portrayed in poetry, literature, and innumerable art prints over the years, evolving from a place of prayer to a source of artistic inspiration.

In the year 663AD, a Buddhist monk became the first person to summit Mount Fuji. However, his name is unknown. After that, men began to climb the peak on a regular basis. Sir Rutherford Alcock, on the other hand, was the first known foreigner to climb Mount Fuji in September 1860.

Mount Fuji not only contains two other volcanoes, but it also has some spectacular lakes at its base. Mount Fuji’s base is surrounded by five beautiful lakes that sit roughly 1,000 feet above sea level and provide excellent views of the mountain.
Kawaguchiko, Yamanakako, Saiko, Motosuko, and Shojiko are the names of the five lakes. These lakes are located approximately 1,000 feet (0.3 kilometres) above sea level. It is a magnificent sight for those who are ascending. It is also the ideal place to see Mount Fuji.

Mount Fuji, like any other big peak with sub-zero temperatures, has a season when it is ideal for climbing. Mount Fuji has one of the world’s shortest climbing seasons of any mountain.
Early July marks the start of the climbing season, which lasts until the end of August. The explanations are climate and temperature fluctuations on the mountain. The average daily temperature in July is 41 degrees Fahrenheit (5 degrees Celsius). In August, the temperature atop the peak is no more than 44 degrees Fahrenheit (6.67 degrees Celsius).

8: Mount Fuji is located in Japan and is part of a national park.

Another interesting geographical detail about Mount Fuji is that it is part of the Fuji-Hakone-Izu National Park in Japan. The park is the most popular in the country. It covers a region of around 186 miles (299.34 kilometres) around Japan’s capital, Tokyo.
Aside from Mount Fuji, the park is home to other magnificent historical attractions, including the Old Tokaido Road. Since the 17th century, this road has functioned as a preservation site for rest stops that have served travellers to the area.

9: There are four different pathways that go to the summit of Mount Fuji.

Mount Fuji has four main trails that lead to the summit, each with at least five rest stops. The climb to the top of the mountain takes about six hours on average. Food, snacks, and resting areas are available at these rest stops. If you’re a beginner climber, the Yoshidaguchi trail to the summit is the best option.
Subashiri Trail, Fujinomiya Trail, Yoshidaguchi Trail, and Gotenba Trail are the four primary pathways that lead to Mount Fuji’s summit. If you’re an experienced climber looking for extra adventure, the Gotenba trail will provide you with a “less crowded” trek to Mount Fuji. This difficult trail is used by only 5 to 10% of climbers.

10: Mount Fuji is one of the most climbed mountains in the world.

Mount Fuji, Japan’s most famous tourist attraction, attracts over 300,000 climbers each year, an incredible amount considering that it is only accessible for a little more than two months of the year. During Mount Fuji’s official climbing season, which lasts barely two months, you will see crowds of people descend (July and August).