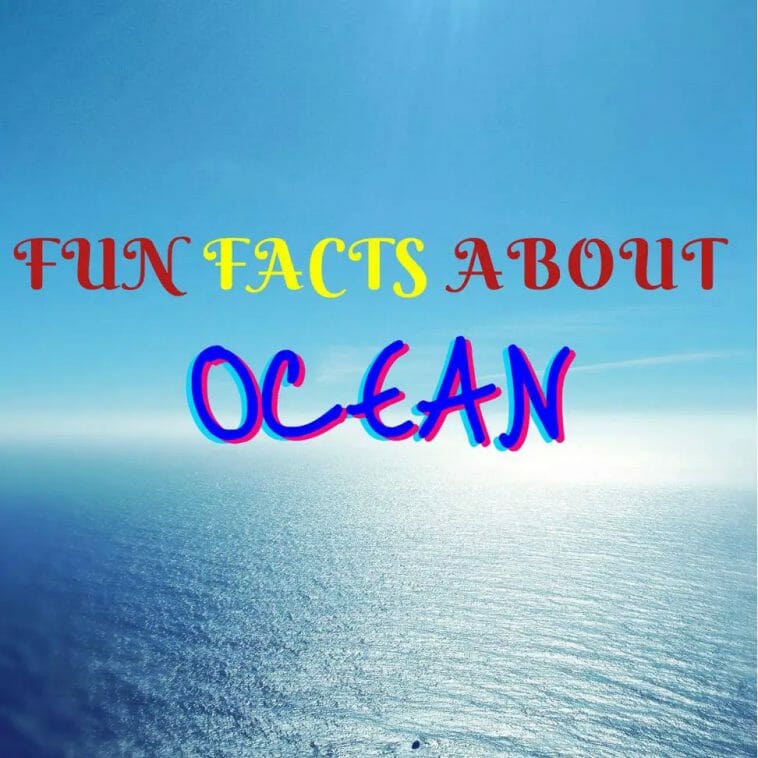 The ocean is a true wonder of the planet, despite its vastness. The ocean covers over 71% of the Earth’s surface and has a significant impact on our world. Some regions of the ocean are rich with life, while others are gloomy and bleak. It might be a relaxing spot or a place to look for food. From plankton to whales, the ocean is home to a diverse range of sea creatures.

Here are some interesting facts regarding this amazing natural phenomenon.

Contents for Fun Facts about the Ocean

1: More over 70% of the earth’s surface is covered by the ocean.

The oceans are vast masses of salt water that span 71 percent of the Earth’s surface and hold 97 percent of the world’s water. Fresh water makes up less than 1% of the total, with glaciers and ice caps accounting for another 3%. The world’s oceans are separated into four main geographic regions by oceanographers and nations: the Pacific, Atlantic, Indian, and Arctic.

2: The oceans are home to 94% of all living organisms on the planet.

Our oceans encompass more than 70% of the Earth’s surface, so it’s no wonder that they are home to more than 90% of all living things. According to scientists, the ocean is home to an estimated one million ocean animal species. However, the majority of them (95%) are invertebrates, or animals without a backbone, such as jellyfish and shrimp. The bristlemouth, a tiny saltwater fish that glows in the dark, is the most abundant vertebrate on Earth.

One of the most enduring things about the ocean is the way the deep blue water churns, rolls, and comes in waves all the time. There are two things that make it look blue: the sun has red and orange wavelengths that are absorbed by the surface and blue wavelengths that penetrate deeper, making it look like it’s blue. These waves can travel down, so the ocean will look bluer as you go down.

4: An icequake generated the loudest sound ever recorded.

The National Oceanic and Atmospheric Administration (NOAA) recorded “The Bloop,” one of the loudest sounds ever recorded, in 1997. The sound was loud enough for sensors almost 3,000 miles away to pick it up.

The nature of the sound first led researchers to believe it came from an animal, despite the fact that no known animal large enough to create that sound exists. The NOAA decided after 15 years that the noise was caused by an icequake, which occurs when seismic activity causes a crack in frozen permafrost.

15: The Mariana Trench is the deepest region of the ocean.

The Mariana Trench is the deepest region of the world’s oceans, as well as the deepest point on the planet. A valley known as Challenger Deep extends 7 miles (36,070 feet) below the surface inside the Trench. For instance, the entire summit of Mount Everest, which stands at 29,029 feet, could easily fit there.

Until recently, crewed investigations had only gone down to a depth of 35,797 feet, which was set by two oceanographers in 1960. In a solo voyage in 2012, director James Cameron delved into similar depths. Victor Vescovo made history in 2019 when he became the first human to reach the ocean’s deepest depths.

6: Coral produces its own sunscreen, coral fluoresce, to protect its algae.

In shallow water, too much sunshine can harm the algae that reside inside coral. According to a new study, certain corals are developing a sunscreen to protect their skeletons from rising sea temperatures. Algae is lodged in the cells of many corals, which helps both of them grow. Corals glow to preserve algae, which are the coral’s major source of nutrition. As a result, proteins are produced that act as a sunscreen for the algae.

7: Oceans are responsible for 70% of the oxygen in the atmosphere.

Scientists believe that marine photosynthesis produces 50-80% of the oxygen produced on Earth. The majority of this output comes from oceanic plankton, which includes drifting plants, algae, and some photosynthetic bacteria. The ocean’s surface layer is alive with photosynthetic plankton capable of producing more oxygen than the world’s greatest redwoods. When we safeguard the ocean, we are protecting an ecosystem that provides us with oxygen and is critical in regulating climate and mitigating the effects of climate change.

8: From space, the Great Barrier Reef in Australia may be seen.

The Great Barrier Reef off the coast of Australia is the world’s largest living structure. It’s so big that it can be seen from space. Hundreds of billions of microscopic organisms known as coral polyps make up this reef structure. It is home to a diverse spectrum of ecological groups, habitats, and species, all of which contribute to the reef’s status as one of the world’s most complex natural ecosystems. Climate change, which implies greater water temperatures, is the greatest threat to this massive ecosystem, which has a terrible effect on corals.

9: The Pacific Ocean is more than five times the size of the Moon.

The Pacific Ocean is significantly larger than the moon at its widest point, stretching from Indonesia to Colombia. This ocean is more than five times the diameter of the moon, measuring 12,300 miles across. From the Bering Strait to Antarctica, it stretches about 15,500 kilometres, with a maximum width of around 17,700 kilometres between Panama and the Malay Peninsula.

10: The ocean works as a global climate regulator.

The ocean functions as a worldwide climate control system, regulating CO2 levels in the atmosphere by absorbing, storing, and releasing the greenhouse gas in a variety of methods and locations, altering Earth’s temperature. It holds 50 times more carbon than the atmosphere, making it a massive carbon storage facility.

The ocean is thought to have absorbed around 30% of all CO2 emissions from human activity during the last 200 years, but it will eventually absorb much more. If we continue to emit carbon and the ocean continues to store it, changes in water temperature, acidification, and deoxygenation will occur, resulting in changes in oceanic circulation and chemistry, rising sea levels, increased storm intensity, and changes in marine species diversity and abundance.