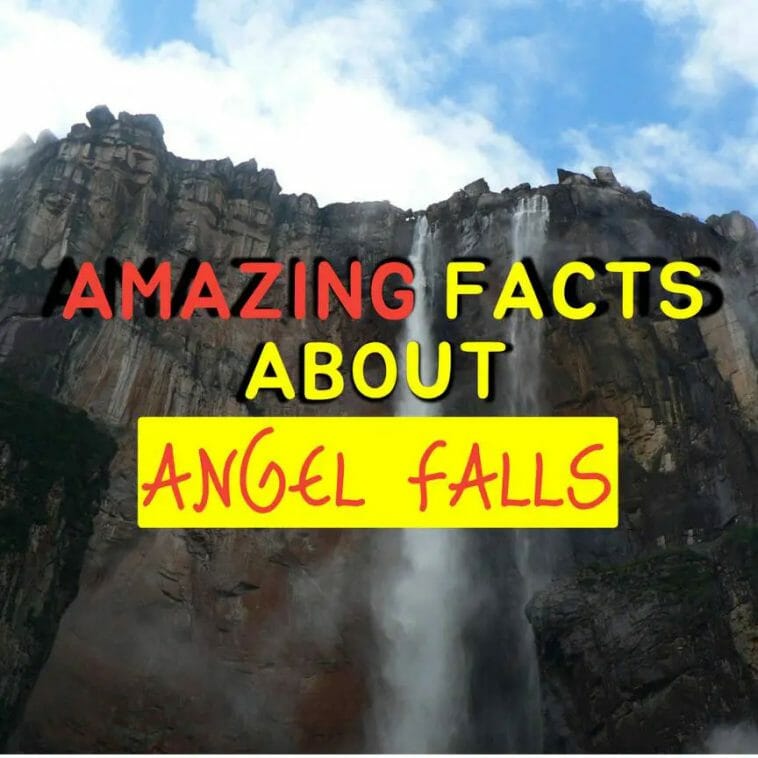 Angel Falls is the tallest waterfall on Earth. The waterfall cascades from a crack at the peak of table top mountain Auyán-tepu into Devil’s Canyon, 3,212 feet (979m) below, in Canaima National Park, Venezuela’s second largest national park. The falls are a tributary of Venezuela’s Orinoco River System’s Carrao River. Angel Falls is one of the world’s most spectacular natural wonders. Here are some interesting facts about the Angel Falls natural landscape.

1: What is Angel Falls famous for?

Angel Falls, in Venezuela, are known for being one of the world’s most stunning waterfalls, as well as the world’s highest uninterrupted waterfalls. After a US aviator became the first person to fly over the falls in the mid-20th century, the falls were given the moniker Angel Falls. The pilot’s name was Jimmy Angel.

2: Where is Angel Falls located?

Angel Falls, also known as Salto Churún Merú, is a waterfall in the Guiana Highlands of Bolívar state, Venezuela, located on the Churn River, a tributary of the Caroní, 160 miles (260 kilometres) southeast of Ciudad Bolívar. Canaima National Park is home to the waterfall.

3: How high is the Angel Falls?

Angel Falls in Venezuela is the world’s tallest waterfall, standing 3212 feet tall. It also features the longest continuous drop in the world, at 2648 feet.

4: What continent is Angel Falls in?

The South American continent is home to the world’s highest recorded waterfall, Angel Falls in Venezuela, which stands at 979 metres and plunges 807 metres (2,648 ft).

5: How old is the Angel Falls?

Angel Falls is located within the Canaima National Park and is part of the plateau that underpins the Venezuelan regions south of the Orinoco River. The age of the plateau is estimated to be two billion years.

6: How did Angel Falls got its name?

In 1933, an intrepid American pilot set out in pursuit of a mythical gold metropolis. Jimmy Angel (Jimmy Crawford) flew by the waterfall for the first time during this excursion. Angel flew to the falls for the second time four years later (1937).

Angel was the first known person to set foot on the Auyán-Tepui after landing his plane on top of it. However, on the peak, the plane became trapped in the mud. As a result, Angel and his three companions, one of whom was his wife, were forced to descend down the mountain and through the bush to safety, a gruelling journey that took them 11 days. Angel’s experience became well-known, and the waterfall was dubbed “Angel Falls” shortly afterward.

7: Who discovered the Angel Falls?

In the adjacent woodlands and savannahs, experts discovered 10,000-year-old evidence of an indigenous community, including 9,000-year-old stone tools. The Pemón tribe has lived on the site for around 300 years.

He didn’t inform anyone else about his discoveries except his friends and family. Sanchez La Cruz’s sketches did not resurface until the government requested information about the area again in 1955.

8: How is Angel Falls created?

Angel Falls is the result of faulting. The movement of rocs along a break or in the Earth’s crust is known as faulting. Faulting produces rock movement and lifts one terrain block above another. A waterfall is generated when a river runs down the edge of an elevated block.

9: What is at the top of Angel Falls?

Angel Falls cascades down from a flat-topped plateau known as Auyán-Tepu, one of Canaima’s several tepuis. 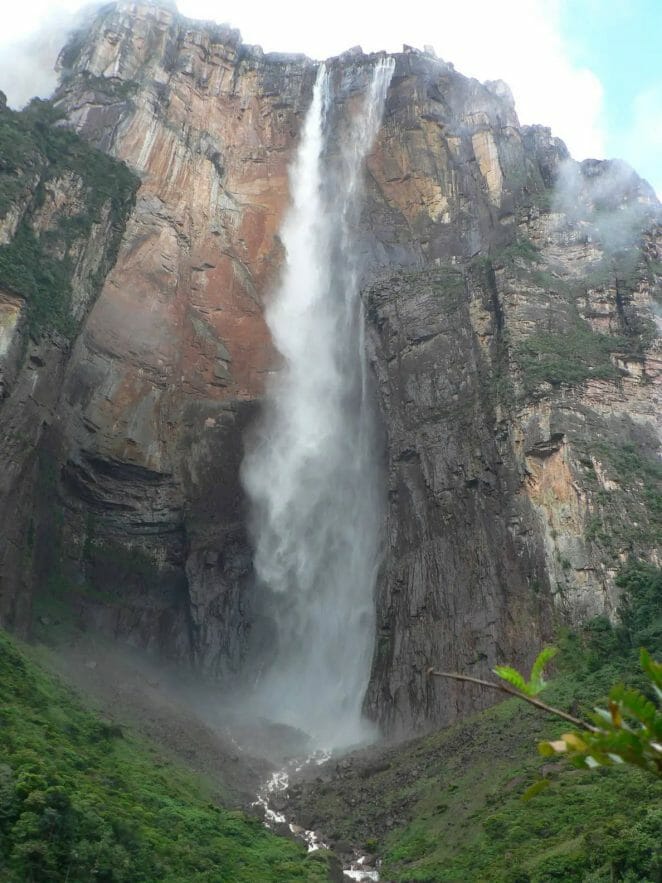 These gigantic exposed rocks, which date back more than 130 million years, are among the continent’s oldest. They are so tall that they are often veiled in clouds, and their slopes are so steep that they appear to be practically vertical drops. They range in elevation from 3,000 to 9,000 feet.

10: What type of rock is Angel Falls on?

Many different types of rocks and minerals surround Angel Falls. The falls are fed by a tabletop mountain comprised primarily of quartzite and sandstone. More sandstone and quartz, shale, granite, and even remnants of crystallisation can be seen as the falls reach Devils Canyon!

11: Can you survive a fall from Angel Falls?

Angel Falls stands at a height of 3,212 feet (979 metres). A person would die if they jumped from the top of the falls. A human would achieve terminal velocity (130 miles per hour/209 kilometres per hour) due to the height of the fall. Because water does not compress at those speeds, the chances of survival are slim.

12: Has anyone ever jumped off of Angel Falls?

Pawel Jankowski of Poland leapt from a height of 3,212 feet off the edge of Angel Falls in Venezuela in 2019. He then releases his parachute by pulling on the cord. He flies down the rock face for over 3,000 feet.

13: Has anyone climbed Angel Falls Venezuela?

14: When did Angel Falls become a World Heritage Site?

UNESCO designated Canaima National Park as a World Heritage Site in 1994, and it covers more than 30,000 km2. This waterfall was one of 28 finalists in the selection of the World’s Seven Natural Wonders.

15: What animals and plants can be found at Angel Falls in Venezuela?

Angel Falls is home to a diverse and unique flora and wildlife. The park is home to around 500 different orchid species. The region’s biodiversity includes the giant anteater, jaguar, Brazilian tapir, gigantic armadillo, pale-throated three-toed sloth, and capybara, among other species.

There are many primate species that inhabit there, including howler monkeys, titi monkeys, white-faced sakis, and others. Some of the 628 species of birds flying through the humid air, 41 of which are indigenous. The jabiru, harpy eagle, black-faced hawk, painted parakeet, red-shouldered macaw, great tinamou, and other bird species have all been seen in this area. Canaima National Park is also home to 60 amphibian and 70 reptilian species.

17: What are some interesting Angel Falls facts?