The army’s function was most likely to serve as tomb guardians or to assist their monarch in the afterlife. The site was discovered in 1974 CE, and the lifelike army figurines offer a rare glimpse into ancient Chinese battle, from weapons to armour, chariot mechanics, and command systems.

Shi Huangdi craved immortality, and his terracotta army of almost 8000 soldiers, 670 horses, and 130 chariots provided him with it, at least in name and deed. Even though the inner tomb has yet to be explored, the mausoleum site is a UNESCO World Heritage Site.

1: What is the Terracotta Army?

2: What was the purpose of the Terracotta Army?

3: Who constructed the Terracotta Army?

Emperor Qin Shihuang (259 – 210 BC), China’s first emperor, ordered the construction of the massive Terracotta Army to protect him once he rose to the throne. The great construction was designed by Prime Minister Li Si at the time, and the senior general Zhang Han was named as the supervisor in charge. Artisans from central government workshops, potters from folk workshops, and some unknown potters were among the workers.

4: When was the Terracotta Army constructed?

The Terracotta Army was constructed almost 2,200 years ago, between 247BC or 246BC and 208BC, over a period of roughly 40 years. Emperor Qin Shi Huang began building his mausoleum as soon as he got to the throne in 247BC, when he was just 13 years old. Most archaeologists believe the Terracotta Army was built concurrently with the tomb or no later than 247BC or 246BC as a burial element of the mausoleum.

5: How many workers were involved in the construction of the Terracotta Warriors?

In total, almost 720,000 people were employed in the construction of the Qin Shi Huang Mausoleum, nearly eight times the number of people who worked on the Pyramid of Khufu. The exact number of people involved in the creation of the terracotta army is unclear; but, given the scope of the undertaking, it should not be a small number.

6: Who built the Terracotta Warriors and what happened to them?

The Terracotta Army was created by a team of potters that combined imperial and folk craftsmen. Each craftsman engraved his name into the pottery figurines he crafted as a method to identify his work and ensure a high degree of quality.

The Terracotta Army was not built according to the original idea. The tomb had to be shut ahead of schedule due to Qin Shi Huang’s untimely death in 210 BC. To keep the Terracotta Army’s secrets hidden, all of the project’s craftspeople were buried alive to prevent anybody from discovering its whereabouts.

7: What is the location of the Terracotta Army?

They are in Shaanxi Province’s Xi’an City, which served as the capital of the Qin Dynasty (221 – 207 BC) when the Terracotta Warriors were created. The Terracotta Warriors are on exhibit in original excavated pits about 1.5 kilometres east of Qinshihuang’s tomb in Lintong District (Xian City’s east suburb).

8: Who discovered the Terracotta Army?

The Terracotta Warriors were discovered in 1974 in the Xiyang Village of Xi’an City’s Lintong District. Local farmers were excavating a well when they unintentionally unearthed several clay sculptures. The well’s mouth is located on the southeast side of Terracotta Army’s Pit 1.

The well drilling began on March 24, 1974, and on March 29, one of the diggers, Yang Zhifa, made an unintentional discovery of a man-sized grey clay figure. Following that, more terracotta warrior fragments, copper weaponry, and floor tiles were discovered in quick succession. The terracotta army’s current Pit 1 was there.

Furthermore, a local archaeologist named Zhao Kangmin is credited with being the first to recognise the Qin warriors, preserving the excavated ones, and repairing the first few warriors. Although the farmers were the ones who first discovered the terracotta warriors, some people believe Zhao was the first to “discover” them from a historical perspective.

9: What is the total number of Terracotta Warriors?


More than 8,000 terracotta figures and horses, including infantry soldiers, cavalry fighters, archers, and chariot warriors, as well as war chariots and horses, are displayed in three pits in the museum, according to the most recent statistics.

Infantry, cavalry, and charioteers are the three main groups of terracotta figures discovered. During the excavation of the three pits, roughly 8,000 life-size, colourful in combat configuration figures were discovered – an entire army that would accompany their emperor into immortality. The infantry is further subdivided into officers of high, middle, and low rank, light- and heavy-armed foot soldiers, and standing and kneeling archers.

10: What Is the Importance of the Terracotta Warriors?

The discovery of the Terracotta Army is noteworthy to historians because it provides insights into daily life in the Chinese Qin period. The tomb contains many authentic relics such as chariots, weaponry, pottery, and the human remains of the workmen who built it, and the figures depict armour and weapons. 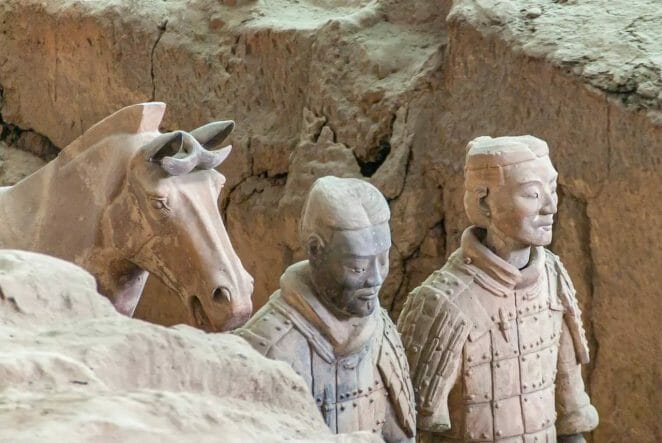 The Terracotta Army is the biggest ancient military exhibit in China and a key element of the mausoleum of China’s first emperor. It’s a valuable resource for understanding Chinese old military science. Furthermore, the Terracotta Warriors are a masterpiece of ancient Chinese sculpture. Over 2,200 years ago, China had highly sophisticated metallurgical techniques, as evidenced by the weapons discovered.

11: What made the terracotta soldiers so unique?

Archaeologists categorise these unearthed terracotta warriors into many various groups based on their postures, clothing, and army roles, including infantry warriors, cavalry warriors, chariot warriors, and kneeling and standing archers.


Despite the fact that the majority of their hands are identical and only eight moulds were used to create their heads, unique surface details were added with clay after assembly. As a result, each terra cotta soldier’s face characteristics appear to be distinct, demonstrating a high level of skill and artistry.

12: Were the Terracotta Warriors made of real people?

13: What is the material used to make the terracotta soldiers?

Yellow clay was the main component of Terracotta Army troops. All of the Terracotta Army’s materials were sourced locally, according to technological study. All of the kilns for burning the terracotta figures were arranged in a 10-kilometer radius circle.

Yellow clay is easy to come by and was a good choice for the job because of its adhesive properties and flexibility. To remove contaminants and verify that the earth was fine and pure, it was screened and ground. A small amount of white grit with quartz sand, mica, and feldspar was mixed in. The addition of grit to the earth improved its mechanical characteristics, making it easier to form the enormous shapes.

14: What is the height and weight of the Terracotta Warriors?

According to their roles, the figures vary in height. The warriors stand an average of 1.80 metres tall and weigh around 160 kilogrammes each. With a height of around 2.5 metres, the general is the tallest (8.2 feet). Most of the warriors are about two metres (six feet) tall, and each sculpture can weigh up to 600 pounds, or 272 kilogrammes. Without the use of modern tools, the terracotta warriors and horses were all hand-crafted.

15: What techniques were used to create the Terracotta Warriors?

According to research, the clay figures were made in different pieces and then put together. First, construct the main body with yellow soil from the pedestal to the collar; secondly, using the mould, make the head, arms, and hands; then, glue them together and let them dry in the shade; finally, carve the details and have them burnt in kilns. Finally, the Terracotta Warriors must be glazed and coloured after the head has been installed.

16: Why is it that the Terracotta Army is facing east?

All of the Terracotta Warriors have their backs to the east. The initial ruling territory of Qin was in the west, whereas the other states were in the east, according to historical documents. Qin Shi Huang had long intended to unite all of China’s states, therefore the troops and horses gazing east could be a sign of his ambition. Some believe they were created to face east in order to keep a close eye on the activities of the eastern states and be ready to confront them at any time.

17: What was the original colour of the Terracotta Warriors?

When the army was first created, the entire army, including warriors, chariots, and horses, was painted and appeared to be more vibrant than it does today. Black hair, pink faces, purple or red robes, black armour, light green pants, and black shoes were the norm. The original colours of the terracotta warriors faded or peeled off after being excavated after being buried underground for over 2,200 years.


According to statistics, the Terracotta Army was painted in a variety of colours, including soft green, vermillion, claret red, pink, azure, and white. Different colours were used to paint different types of warriors. Compared to ordinary sculptures, general statues were painted in more complex hues and with more intricate detail. Furthermore, statues in unusual poses, such as the famous kneeling archer statue, were painted with greater care.

18: Is the Terracotta Army being excavated right now?


In 2022, around 20 terracotta warriors were discovered in the No. 1 pit of the Terracotta Army, also known as the “Terracotta Warriors and Horses,” in Xi’an, the capital of northwest China’s Shaanxi Province. More than 2,000 warriors and horses have been excavated from three different burial pits since the Terracotta Army’s discovery, with an estimated 6,000 remaining buried beneath. It’s possible that the discovery’s massive scale has increased to the mystery and fascinated the public.

Archaeologists and historians have yet to discover Emperor Qin Shi Huang’s actual tomb, which is still sealed. Due to preservation concerns and the risk of booby traps, the emperor’s mausoleum has not been opened yet.

Mercury leaking from the Mausoleum might poison people and pollute the environment. The grave had a significant amount of mercury in it. When archaeologists enter the tomb, it has the potential to do harm to them.

20: How were the Terracotta Warriors kept in such good condition?

The Terracotta Army’s preservation was aided by a combination of the bronze’s increased tin concentration and the unique soil in which it was buried. The soil had not yet been analysed, but when the current study’s experts looked into it, they discovered that it had a slightly alkaline chemical composition and fine particles that would have prevented natural acids and organic matter from corroding the metals.

21: How to Protect the Terracotta Warriors?

Archaeologists have tried a variety of methods to maintain the Terracotta Warriors, including building shelters for them, protecting their colourful coats, cleaning the mould, stabilising the statues, and so on. Additionally, attempts have been undertaken to improve the Terracotta Army’s internal and external environments by watering the earth, limiting tourists, and purifying the air. The Terracotta Army was discovered in 1974, and efforts on protecting and repairing it began immediately.


In 1982, the museum formed a specific team to conduct terracotta painting research. To solve difficulties, the team collaborates with a number of international institutions. Though colour preservation technology has advanced significantly, colours can still only endure roughly 10 years. The technology is still in its infancy. As a result, only a small section of the vast Terracotta Army has been thoroughly studied.