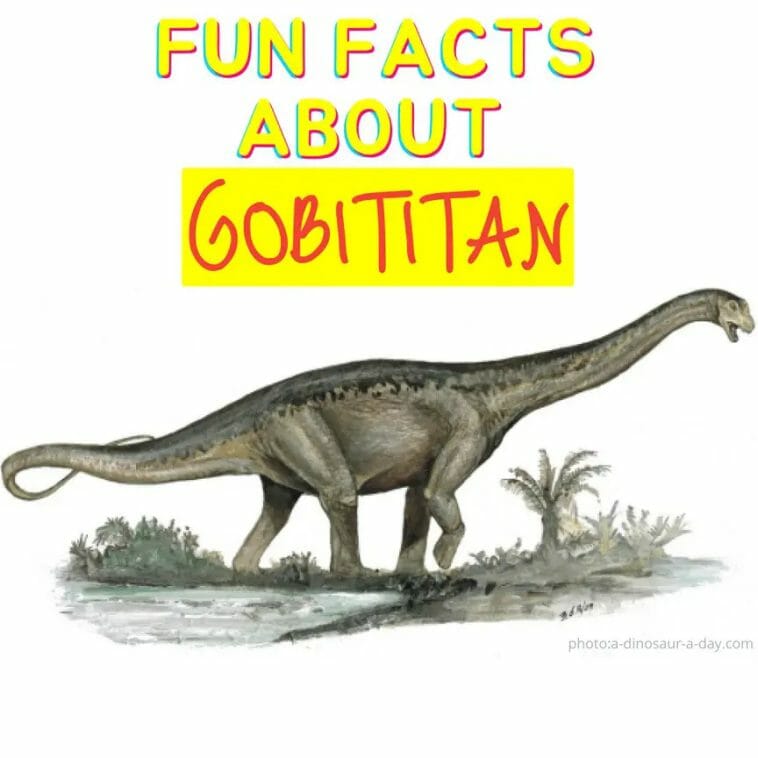 Gobititan was a sauropod from the Xinminbao Group in China’s Gongpoquan Basin. Gobititan was a prehistoric titanosaur. The description is based on the discovery of a fragmentary skeleton composed of 41 caudal vertebrae and an incomplete left hind limb. Titanosaurs were abundant on all continents until the end of the Cretaceous period. This discovery demonstrates that titanosaurs did not exist in Asia prior to the Early Cretaceous.

Find out more facts about Gobititan.

Contents for Fun Facts about Gobititan

Name: Gobititan (Greek for “Gobi Titan‭”); pronounced Go-be-ty-tan
When it lived: Early Cretaceous, 113 to 110 million years ago
Type of dinosaur: Sauropod
Location: China
Habitat: Terrestrial habitats.
Length/Weight: 20 meters/20000kg
Diet: Herbivorous
Distinguishing Characteristics: It had high number of caudal vertebrae made it a primitive titanosaur.
Named by: You, Tang, and Luo (2003)

2: How do you pronounce ‘Gobititan’?

3: What does the name Gobititan mean?

The dinosaur Gobititan is derived from the Gobi desert location and the Titans of Greek mythology, alluding to the animal’s huge body size. The name shenzhouensis is derived from “Shenzhou,” an ancient term for China.

Gobititan shenzhouensis, the sole type species of the genus Gobititan, was characterised as a Titanosaur. However, the whole skeleton of this dinosaur has not been discovered; just the caudal vertebrae and hind limbs have been discovered. A series of 41 distal and middle caudal articulated vertebrae is retained. In addition, the incomplete hindlimb is missing only the distal half of the femur.