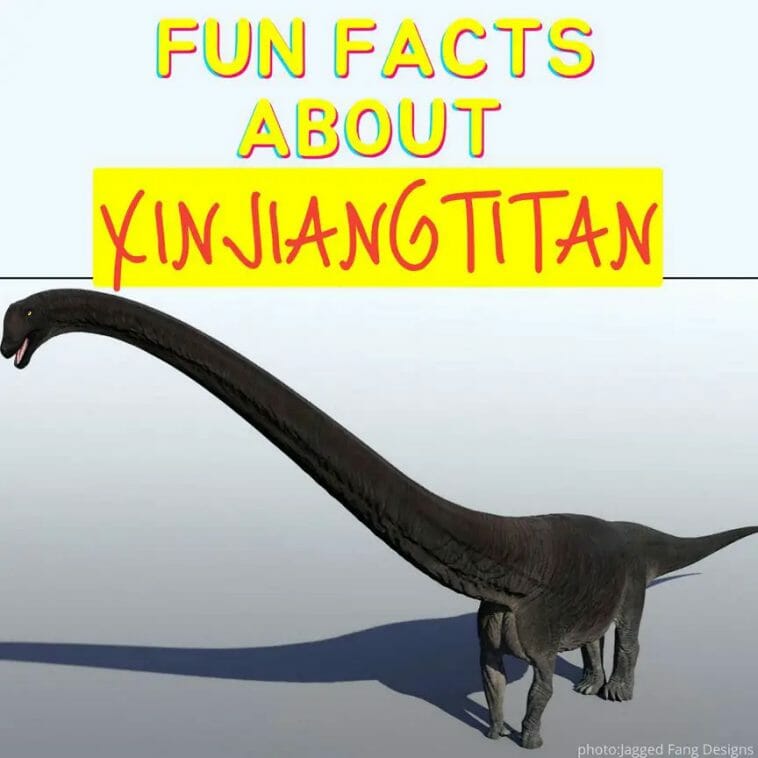 In the Middle Jurassic, Xinjiangtitan existed in what is now China. It was most likely one of the largest known sauropods, with a body length of 30 metres.

Xinjiangtitan was a huge sauropod with a long neck. The genus name is derived from the location near Xinjiang where the fossil was discovered in 2012, as well as Titan, a Greek mythological giant. Shanshanesis is a combination of an alternative name for the county and Shanshan, the titular name of the ancient kingdom.

The Xinjiang Titan holotype is made up of a well-preserved partial skeleton that includes the first two caudal vertebrae, the final two cervical vertebrae, twelve dorsal and five sacral vertebrae, multiple cervical, dorsal, and sacral ribs, and a 165 cm long femur. The find also comprises a 98-centimeter-long tibia, a fibula and a metatarsal bone, the left and right pubic bones, and the right ischium. The discovered row of dorsal vertebrae is 322 centimetres long.

Wu Wen-hao, Zhou Chang-fu, Oliver Wings, Toru Sekiha, and Dong Zhiming characterised Xinjiang Titan for the first time in 2013. Despite the fact that this dinosaur had not been fully discovered at the time of writing, the researchers had enough information to designate the discovery as a new species.

Contents for Fun Facts about Xinjiangtitan

2: How do you pronounce ‘Xinjiangtitan’?

3: What does the name Xinjiangtitan mean?

The generic name Xinjiangtitan is derived from the Chinese province of Xinjiang, where the bones were discovered in 2012, and the Greek word for huge, titan. Shanshanesis is taken from an alternate name for the county where it was discovered, Shanshan, which was named after the historical Shanshan Kingdom.

By looking at the fossilised remains, scientists have made a model of Xinjiangtitan as a huge animal with a very long neck. The bones of the Xinjiangtitan show that it may have been one of the longest sauropods ever found. The size of their dorsal vertebrae revealed that their necks were likewise exceptionally lengthy. Additionally, their cervical vertebrae are longer than those of comparable creatures.
0
SHARES
ShareTweetPin