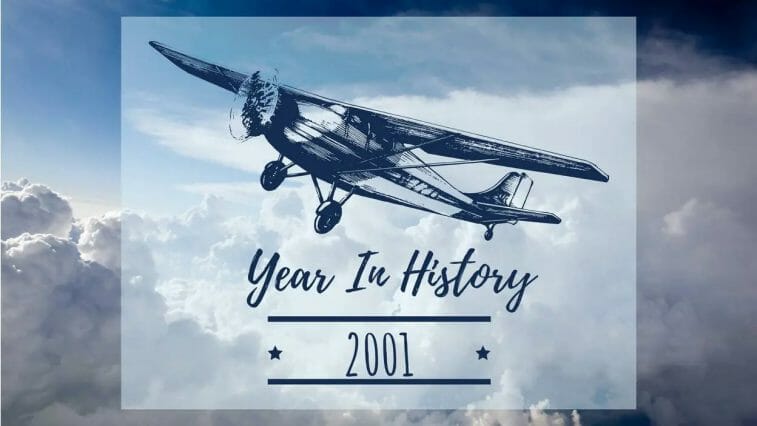 The year 2001 was designated as the International Volunteer Year. The first part of the Harry Porter series, The Lord of the Rings, the Ocean’s trilogy, Shrek, and The Fast and the Furious were all released this year. The highest-grossing film was Harry Potter and the Philosopher’s Stone, which was followed by The Lord of the Rings: The Fellowship of the Ring. Linkin Park’s Hybrid Theory was the best-selling album of the year, according to Billboard.

On January 10, 2001, George W. Bush was sworn into office. An American Airlines Boeing 767 carrying 20,000 gallons of jet fuel crashed into the World Trade Center’s Northern Tower in New York City on September 11, a Tuesday. Following the September 11 attacks on the Pentagon and the World Trade Center, President Bush declared war on Afghanistan on October 7 and signed the Patriot Act, an anti-terrorism measure, on October 26.

During a soccer match in Ghana’s Accra Stadium in May 2001, over 126 people died after an altercation with police and boisterous fans. The Accra Hearts of Oak were the home team, and they were ahead against Kumasi’s Asante Kotoko. Fans of Kotoko began removing seats and hurling them onto the pitch. The police retaliated by firing tear gas into the crowd, resulting in one of the worst sporting catastrophes in African history.

The Leaning Tower of Pisa in Italy reopened on December 15, 2001. This came after an expert-led team spent 11 years and $27 million fortifying the 12th-century tower without removing the famed lean. The tower was closed by the Italian authorities in 1990 when it sagged 15 feet off the perpendicular. It’s a wonder it didn’t fall over.

When Robert Tools received the world’s first self-contained heart, it was a glorious year for science. The infamous anthrax letters of 2001 were a new type of terror that killed five people and sickened 17 others.

Continue reading to discover more about the events of 2001.