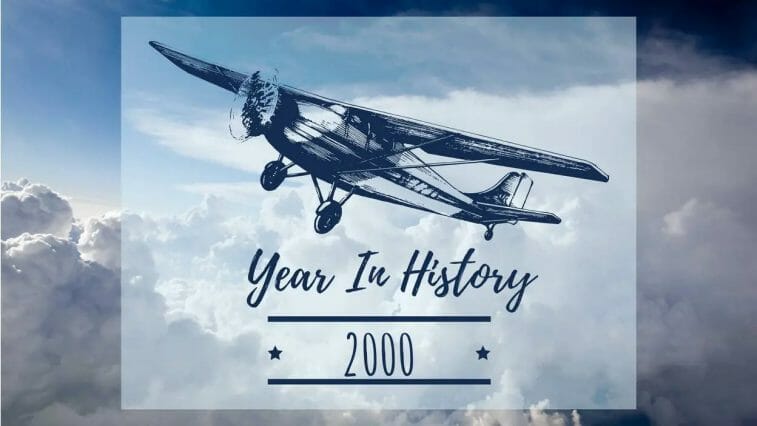 Mission Impossible II, Tom Cruise’s second film in the Mission Impossible franchise, was the highest-grossing film in theatres at the time of its release. The year 2000 was also designated as the International Year of Peace Culture and the World Mathematical Year. It is the year that witnessed the publishing of Stephen King’s Riding the Bullet, the world’s first E-book for the mainstream market.

At the height of the internet bubble, America Online Inc. announced the purchase of Time Warner Inc. for $182 billion in stock and debt. The merger resulted in a $350 billion mega media conglomerate with interests in music production, publishing, entertainment, cable television, news, and internet services. In December 2000, the Federal Trade Commission gave the two corporations permission to consolidate. The new business was 55 percent controlled by AQL stockholders and 45 percent by Time Warner shareholders.

Bridgestone/Firestone Inc. announced the recall of approximately 6 million Wilderness AT, ATX, and ATX II tyres on August 9. The recall was announced two days after the National Highway Traffic Safety Administration linked the tyres to hundreds of accidents and 46 deaths. The tread on the tyres was the source of the problem. The research revealed that the tread on the 15-inch Wilderness AT, ATX, and ATX II tyres tended to peel off, causing vehicles to roll over.

For many people, Christmas is one of the happiest times of the year. On Christmas Day 2000, in China, a Christmas party turned fatal. The party was held in an unlicensed disco, which caught fire as the evening progressed. The tragedy in Luoyang, China, claimed the lives of more than 300 individuals. Despite claims that the world was coming to an end, the year 2,000 brought with it a new era of scientific progress and civic rights for neglected societies and groups. The year 2000 is the first of the new millennium.

Continue reading to discover more about the events of 2000.