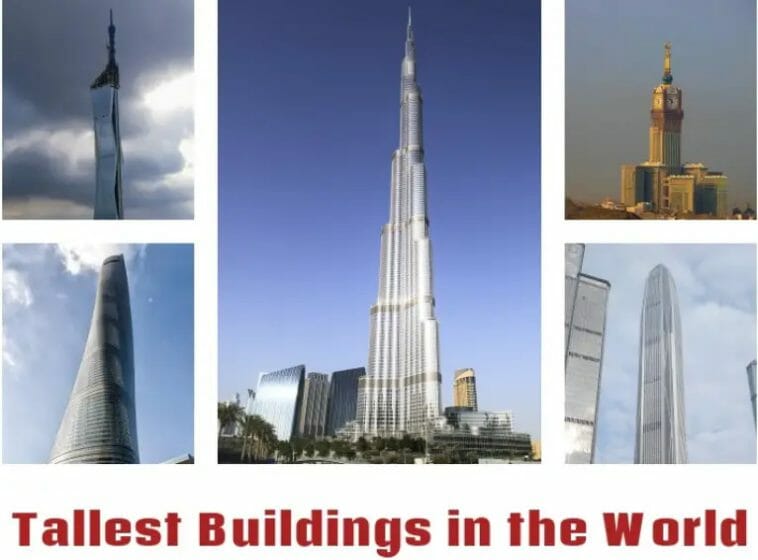 The world is a vast expanse of space. With so many places and nations to explore, it appears as though there is always something new to learn. If you are interested in architecture, you are surely aware that buildings come in a variety of shapes and sizes. From the world’s tallest skyscrapers to the world’s most recognised landmarks, each one has a tale to tell that is distinct from the others.

The following is a list of the tallest buildings on the planet.

Contents for Tallest Buildings in the World

As the world’s tallest structure, Burj Khalifa soars to a height of 2,717 feet during its crowning moment. Burj Dubai was the skyscraper’s original name. A modification in the name was made to honour King Khalifa bin Zayed Al Nahyan after the developers went bankrupt midway through the project.

Many records were broken by the skyscraper, including the title of the world’s highest. Office, retail, residential, and an Armani Hotel are all located in the structure. The Burj Khalifa, a 163-story skyscraper, was completed in 2010. The Burj Khalifa’s record-breaking height was made possible in part by the structure’s revolutionary tripedal design and the projecting forms of its edges, which cut through the wind like the bow of a boat to lessen turbulence. There’s a 450-foot gap between it and the next-highest competitor.

Merdeka 118 is a 118-storey skyscraper in Kuala Lumpur, Malaysia, that would rise to a height of 678.9 metres (2,227 feet). Merdeka is the name of the skyscraper, which was inspired by two historic monuments: Stadium Merdeka and Stadium Negara. On August 31, 1957, Malaysia declared independence from the United Kingdom at Stadium Merdeka. The spire of the structure was completed in November 2021.

It will be the tallest skyscraper in Malaysia and Southeast Asia, as well as the second tallest on the planet, when it is completed in 2022. The structure will also be the first in Malaysia to receive a triple platinum rating from international sustainability standards like Leadership in Energy and Environmental Design (LEED). It will be Malaysia’s tallest building when it is completed in 2022.

A total of 400,000 square metres of residential, hotel, and commercial space will be available. The structure will include a total of 100 floors of rentable space, 83 stories of office space, 12 levels of hotel rooms, 5 floors of hotel condominiums, and Southeast Asia’s largest observation deck.

Shanghai Tower is the third-tallest building in the world, standing 2073 feet above the ground on 128 floors. It is located in Lujiazui, Pudong, Shanghai. Additionally, it is one of the most sustainable tall structures in the world. The entire structure is organised into nine distinct zones, each of which is designated for leisure, retail, or office usage.

Twisting into the sky at 128 stories, the Shanghai Tower is one of the world’s highest structures. Gensler’s design has an inner glass façade and a whirling exterior. While the interior of the tower is divided into nine zones by the stacking of inner components, the curving exterior not only creates a unique look as the third of three skyscrapers in close proximity, but also provides an engineering benefit by lowering wind loads. With one of the world’s highest observation decks opening to the public in 2016, expect a diverse range of uses and plenty of one-of-a-kind vistas of the city on the inside.

The Makkah Royal Clock Tower is the fourth-tallest building on the planet. The tower is part of a complex of seven buildings owned by the administration of Abraj Al-Bait. The 120-story skyscraper also houses the Fairmont Hotel, which caters to the millions of pilgrims that visit Mecca each year.

The King Abdulaziz Endowment Project, which intends to improve the city in order to better serve pilgrims, includes these towers. The Makkah Royal Clock Tower Hotel was constructed to provide luxury lodging for rich Muslim visitors performing the Hajj. With a construction cost of $15 billion, the tower is not only the fourth-tallest but also the most costly building in the world.

China’s Ping An International Finance Center (IFC) is a supertall skyscraper in Shenzhen, Guangdong province. It has 115 floors and is 599 metres (1,965 feet) tall. It is the highest building in Shenzhen, and it is also the country’s second-tallest and the fifth-tallest building overall in the world. At 562 metres, it also set a new record for the tallest observation deck in an office building (1,844 ft). The Ping An International Finance Center has 33 double-deck elevators that travel at up to 10 metres per second.