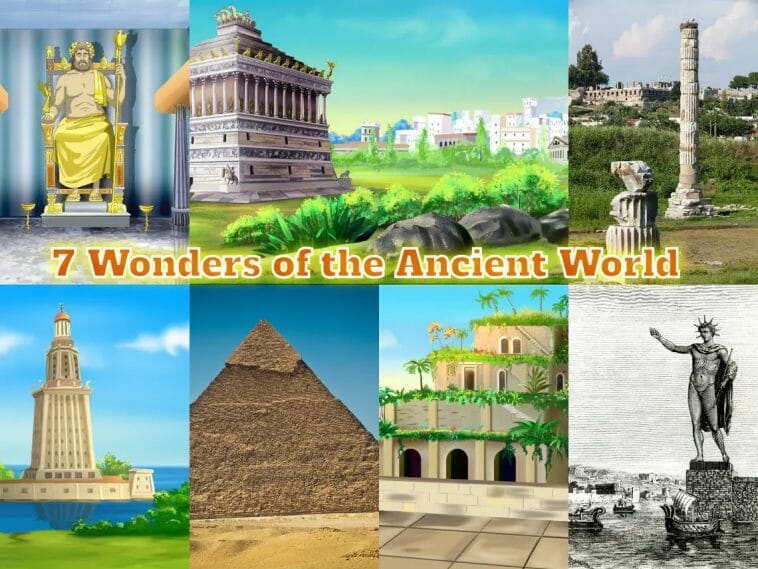 The magnificent works of art and design are the living proof of man’s ingenuity, ambition, envisioning power, and aptitude. They also give us a clue about the nature of the human race to variance, controversy, demolition and adornment.

Philo of Byzantium gave the primary list in his work called “On The Seven Wonders” in 225 B.C. With time, human and natural forces mutually combine to destruct all wonders but one of them. Chances exist that among the wonders of the world, any one of them may have vanished. But these seven wonders, present at this time, are still the sources of inspiration and celebration for being such a remarkable creation of ancient civilizations.


Contents for 7 Wonders of the Ancient World

The Great Pyramid at Giza was the highest man-made construction in the world for approximately 4000 years. In the late eighteenth and start of the ninth century CE, the real exploration and excavation of the inside of the pyramid started. The complex details of the interior of the pyramid increased the curiosity of people of the modern age who were also unfamiliar with the ancient writers. The source of attraction for ancient tourists was the ideal symmetry and striking height.

If they existed as described, the Hanging Gardens of Babylon were created between 605-562 BCE. They were built by Nebuchadnezzar II as a present to his wife. Diodorus Siculus, an ancient writer, narrated this garden was filled with exotic species of self-watering plants and animals. They reached a height of 23m, or 75 feet, with the help of a chain of climbing terraces. Nebuchadnezzar commanded the mountain to be created for his wife, Amtis of Media, in Babylon because she always thought back to the flowers and mountains in her motherland. But there is a dispute about their existence because they are not mentioned in the history of Babylon. Herodotus, the father of history, also did not introduce these gardens while describing Babylon’s past. However, there are many ancient places, figures, and other realities which Herodotus has failed to mention, and there are some of his mentioned ancient facts which have been proven wrong. The existence of the gardens is claimed by Philo, Diodorus, and the historian, Strabo. In the 1st century CE, an earthquake destroyed these gardens.

Phidias, the famous Greek sculptor, constructed the Statue of Zeus at Olympia. In ancient times, Phidias was known as an outstanding sculptor in the 5th century BCE. The Statue of Athena in Athens and the Parthenon were also created by Phidias. This statue portrayed the god Zeus sitting on his throne. The statue was designed to have ivory skin and robes of hammered gold and its height was 40 feet or 12 metres tall. It was created in such a manner to inspire awe in the worshippers who visit the Temple of the god Zeus at Olympia. However, this giant statue was not the source of inspiration for everyone. After the rise of Christianity, the Temple of Zeus fell into ruin and there was a ban on the Olympic Games as being ‘pagan rites’. This statue of Zeus was then transferred to Constantinople. An earthquake destroyed it later in the 5th and 6th centuries CE.

The Temple of Artemis at Ephesus (Ephesos) was dedicated to Artemis, the Greek goddess. This temple was so splendid that the same style of awe is obvious through every account written about it. This temple is declared as the most mesmerizing structure created by human hands. It was sponsored by the Croesus of Lydia, a wealthy king, and, according to Herodotus, the king spared no expense on any of his works. This temple was supported by 127 60-foot or nearly 18 meter high columns. It was 425 feet or almost 129 metres long and its width was 225 feet or 69 metres. This temple was completed in 550 BCE. This amazing temple was set on fire by Herostratus on July 21, 356 BCE. His aim was to be remembered as the man who destroyed this masterpiece, thus being able to achieve long-lasting fame. Strabo wrote the name of that man in the history of the temple, although the Ephesians commanded never to record or remember his name. Alexander was born on the same night that this great temple was burned, so he was later given an offer to rebuild this destroyed temple.

The Mausoleum at Halicarnassus was built in c.351 BCE. It was actually the tomb of the Persian Satrap Mausolus. Halicarness, which is known as Bodrum in today’s Turkey, was chosen as the capital by Mausolus. He, along with his beloved wife named Artemisia, made great efforts to build a city with such a beauty that can not be found anywhere in the world. After the death of Mausolus in 353 BCE, his wife decided to make his final resting place one which should match the standards of such an honourable king. She died two years later, after the death of her husband. Her ashes were also buried along with Mausolus in this mausoleum. This tomb was decorated and enhanced with a fine sculpture and it was 135 feet or 41 meters in height. A series of earthquakes led to the destruction of the mausoleum and its ruins stayed there for many hundreds of years. It was completely deconstructed in 1494 CE and then was used for the building of a castle at Bodrum by the knights of St. John of Malta.

The Colossus of Rhodes was built in the third century B.C. over 12 years. A legend claims that the equipment which the Macedonians left behind was sold by the Rhodians to pay for the Colossus. A sculptor named Charles designed this statue and it was the tallest structure of ancient times, being 100 feet in height. It stood for almost sixty years after its completion in 280 B.C. It was destroyed later on by an earthquake and it was not rebuilt again. The remains of this sculpture were sold as scrap metal by Arabs after they invaded Rhodes hundreds of years later. This is the reason the exact location and structure of this sculpture is unknown to archaeologists.

The Lighthouse of Alexandria was designed by Sostratos, the Greek architect. It is located on Pharos, a small island that is located near the city of Alexandria. It was completed in the reign of Ptolemy II, around 270 B.C. The Nile river ships were guided in and out of the busy city’s harbour with the help of this lighthouse. The archaeologists concluded from the ancient coins having a lighthouse depicted on them, that there were three tiers in this lighthouse. The bottom is at square level, the middle is at octagonal level and the top is cylindrical and then there is a 16-foot statue above that. This statue is thought to be of Ptolemy II or maybe of Alexander the Great, for whom the city was given its name. The estimated height of the lighthouse is thought to be 200 to 600 feet, but scholars of modern times assume it to be 380 feet in height. A series of earthquakes from 956 to 1323 led to the destruction of the lighthouse. At the bottom of the Nile, few of its remains are still found.