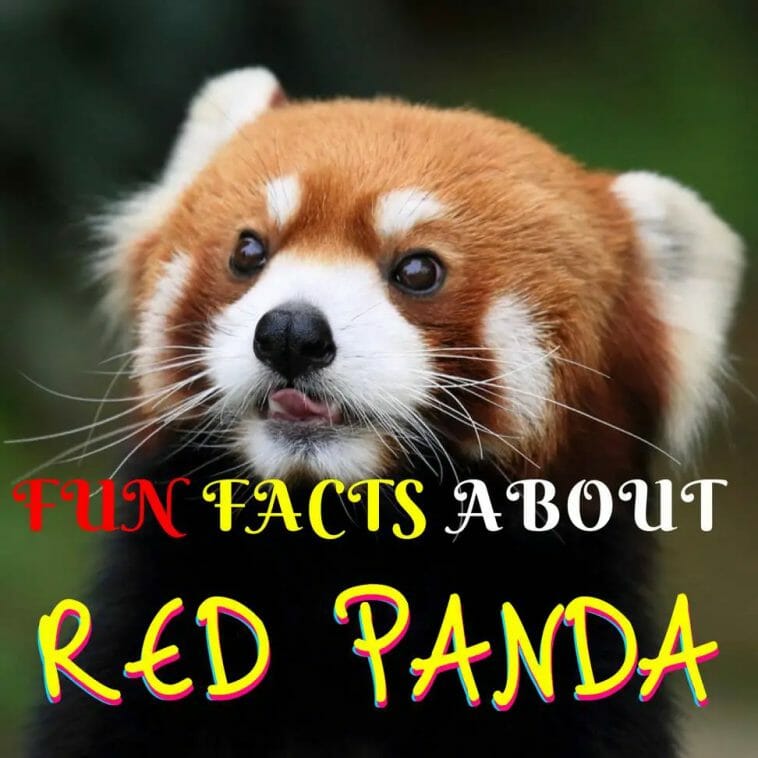 Red pandas are arboreal mammals found in the Himalayan, Myanmar, and China’s mountain forests. At night, they are active. Bamboo leaves, berries, honey, eggs, and small prey are some of the things they like to consume. Pandas have a long tail that helps them balance their weight while climbing trees. Their thick fur keeps them warm in the chilly climes they reside in. Habitat destruction and hunting have made red pandas an endangered species.

It’s time to pay more attention to red pandas! This is a list of some interesting facts about these animals that you might not know.

1: The red panda is known by a number of different names.

The red panda is an elusive and mysterious animal that lives in the biodiverse forests of the Himalayas in Nepal, India, Bhutan, Myanmar (Burma) and southern China. The red panda has a lot of different names. They have also been called the “firefox,” “little panda,” and “red-cat-bear.” First panda and “original panda” are better terms because western scientists used them 50 years before the giant panda and came up with the name “panda.”

Red pandas and giant pandas are very hard to mix up because they look very different from each other. People think red pandas are a lot smaller than they are. They’re about the size of a cat. They are also from different animal groups, and they are not the same colour. It’s more red than the giant panda, but it also has brown and white parts. They are named for the colour of their fur, which helps them stay warm in cold places and helps them blend in with fir trees.

3: There are pseudo-thumbs on red pandas.

Red pandas, like giant panda bears, have a pseudo-thumb, which is essentially a stretched wrist bone that functions as a thumb but isn’t a genuine appendage. These “thumbs” assist red pandas in gripping and grasping objects such as bamboo and tree branches in order to dine and move about. According to a 2006 study, the false thumbs were acquired from a primitive member of the red panda family who lived in trees but ate more carnivorously.

4: The majority of red pandas are carnivorous vegetarians.

Although it may appear to be an oxymoron, the term ‘carnivore’ does not refer to a meat eater in this context. Carnivores are a biological order that comprises animals such as bears, dogs, and cats. While most of these species are carnivores, some are also omnivores and vegetarians.

Because they are descended from the same ancestors as other carnivores, red pandas are categorised as carnivores, but they rarely eat anything other than bamboo and a few insects. Red pandas, on the other hand, eat only the young leaves of a bamboo plant, but giant pandas eat the entire plant. Because this is such a nutritionally deficient food supply, they must spend 13 hours a day eating and seeking for food, and in the winter, they can lose up to 15% of their body weight. They also consume grass and fruit, as well as the occasional egg, insect, small mammal, or bird.

5: The bear family does not include red pandas.

Unlike giant pandas, red pandas do not belong to the bear family. Red pandas are related to skunks, raccoons, and weasels, but have lately been separated into their own Ailuridae family. Their closest fossil ancestors lived 3-4 million years ago, and they have no living relatives!

6: Living fossils on the Earth include red pandas.

Ancient relatives of the living red panda colonised North America between 4.5 and 12 million years ago, according to fossils discovered at the Gray Fossil Site in Tennessee. The ancient panda, known as the Bristol’s panda (Pristinailurus bristoli), was discovered in 2004 by East Tennessee State University researchers who uncovered skeleton pieces and a single tooth at the famous fossil site. The fossils were discovered to be from an unknown prehistoric species, and a more complete jawbone specimen was unearthed a few years later.

The red and black coloration of red pandas hides them from predators. Their backs are the same hue as the moss that grows on the trees where they inhabit. From below, it’s tough to spot them because of the black on their stomachs.

Shortly after the search for the red panda involved in the 1978 Rotterdam breakout began, it was discovered dead. However, the incident prompted a strange psychological insight. Even after the panda’s body was discovered, more than a hundred people claimed to have seen it alive.

It’s thought that because people anticipated to see a red panda, they saw one even though there wasn’t one; this phenomenon is known as the “Red Panda Effect”.

9: An internet browser has been named after red panda.

Firefox, Mozilla’s main browser, signifies red panda (the logo features a red panda). Mozilla wanted to call the browser Firebird at first, but discovered that another open source project had already taken that name. To avoid upsetting anyone, they chose Firefox, which is another name for the red panda.

There are less than 10,000 red pandas left in the wild, according to the World Wildlife Fund. Habitat loss raises the risk of extinction for the species. Because their forest home is being removed, red panda numbers are declining over much of their territory due to the loss of breeding trees and bamboo.

When red pandas get trapped in traps designed for other animals, such as wild pigs and deer, they are frequently killed. In China and Myanmar, they are also poached for their unusual pelts. In Bhutan, red panda fur caps or hats have been discovered for sale.