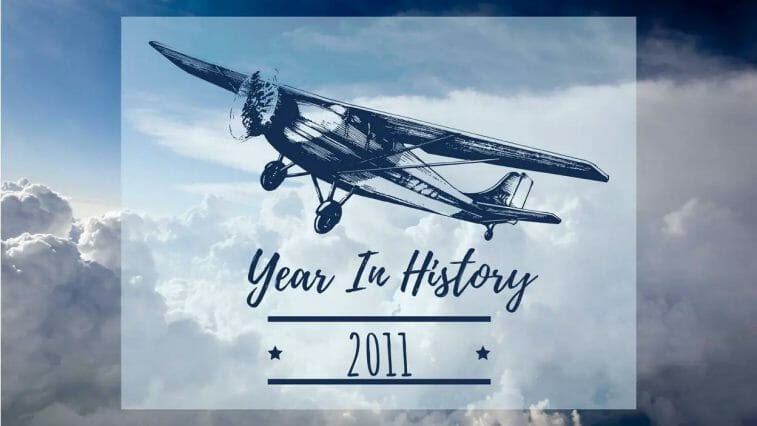 The year 2011, which fell in the third year of Barack Obama’s presidency, was a pivotal one for the world. It was also the year that the world’s population surpassed 7 billion people, according to various sources. These 365 days introduced us to things we now know and enjoy, as well as those that point to a brighter future. It could also be the year that many future world-changers are born. Jacob or Sophia will almost certainly become famous, as they were the most popular names in 2011. However, some well-known people passed away in 2011. Frank Buckles, the last living American WWI veteran; Osama Bin Laden, the former Al-Qaeda leader; Elizabeth Taylor, the fashion icon; Steve Jobs, the Apple CEO; and Kim Jong-Il, the former North Korean leader were among those honoured.

People were reading The Marriage Plot, State of Wonder, and The Art of Fielding. Meanwhile, audiences flocked around Hugo, The Descendants, and War Horse on the big screen. This year saw a lot of changes in world leadership as well as a slew of new developments. It was declared “The International Year of Forests” and “The International Year of Chemistry” by the United Nations.

Additionally, 2011 saw the start of the “Arab Spring,” the tenth anniversary of Wikipedia, and the final episode of the Oprah Winfrey Show. The magnitude 9.0 earthquake that rocked Sendai on March 11th, 2011, captured the focus of the news for weeks. On the brighter side of the spectrum, many LGBT Americans celebrated this year as the end of the “Don’t Ask, Don’t Tell” policy. A wide range of discoveries were being made off the stage of public events and in laboratories all across the world.

Kepler 22-B is the first planet discovered in the “goldilocks” zone that may be habitable for life. In addition, the theory of the universe’s accelerated expansion was ultimately verified. Siri’s launch ushered forth a whole new age of human-phone connection. 2011 may have set the foundation for a more efficient and humane future with the invention of Zero Liquid Discharge, a more effective technique to filter sewage, and lab-grown meat.

Continue reading to discover more about the events of 2011.