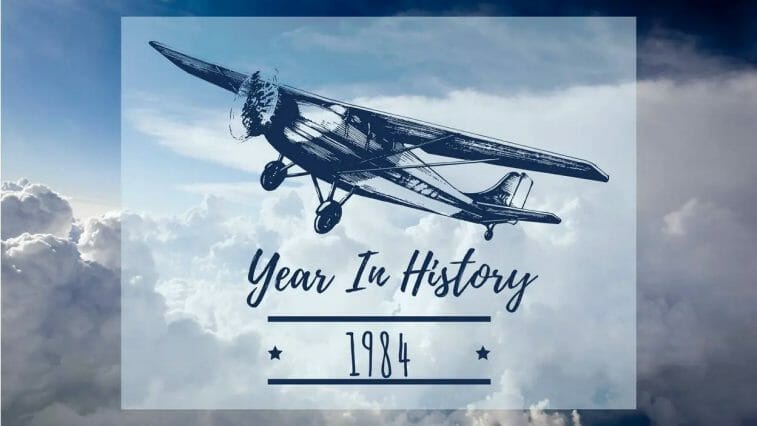 The world became aware of the Ethiopian famine in 1984, causing the European Economic Community to set aside £1.8 million for humanitarian aid and inspiring Irish artist Bob Geldof to start the Band Aid organisation, which would contribute its income to help fight the hunger.

Indira Gandhi, the Indian Prime Minister, is assassinated by her Sikh bodyguards on October 31st, igniting fatal anti-Sikh riots across the country. In the same year, the Bhopal tragedy happens in India’s Madhya Pradesh region, when a gas leak kills over 8000 people in the world’s worst industrial disaster. In the largest demonstration in Brazilian history, over a million people march in the streets of Sao Paulo, led by politician Tancredo Neves, to demand democratic elections. Ronald Reagan was re-elected on November 6th, just months after calling for a ban on chemical weapons in response to Iran’s condemnation of Iraq’s use of such weapons.

In sports, the 1984 Summer Olympics are hosted in Los Angeles, with the Soviet Union boycotting the games, which had been announced a few months prior. The Chicago White Sox beat the Milwaukee Brewers in the longest game in Major League Baseball history on May 8th, clocking in at eight hours. Born in the USA was released by Bruce Springsteen on June 4th, and Terms of Endearment won five Oscars, including Best Picture.

In the world of science and technology, Apple Computers debuted the Macintosh Personal Computer on January 4th, a day after running the famous advertising based on George Orwell’s novel 1984, and US scientists announced the discovery of the AIDS virus later that year. Kate McKinnon, an American actress and comedian, was born in 1984, as was Mark Zuckerberg, an American entrepreneur, and Trevor Noah, a South African comedian and television host.

Continue reading to discover more about the events of 1984.