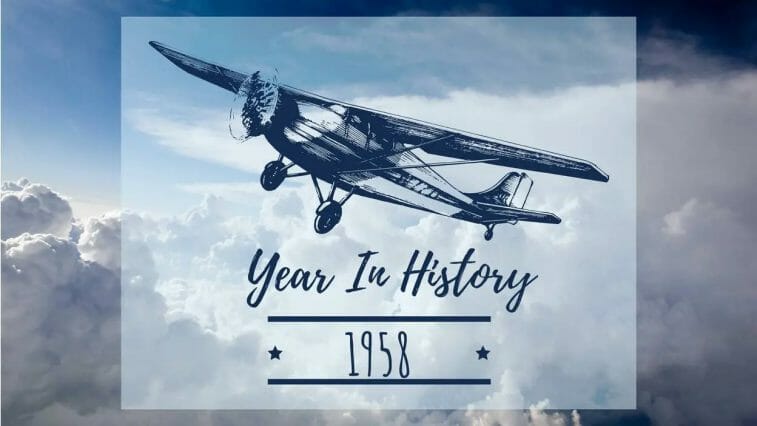 In terms of technology and culture, 1958 was a watershed moment. Sputnik 1, the world’s first artificial satellite, fell out of orbit on January, signalling the start of the year. As one spacecraft descended, another rose. Explorer 1 was successfully launched into Earth’s orbit by the United States in January. It was the United States’ first successful satellite launch. The National Aeronautics and Space Administration (NASA) was created in the United States in 1958. NASA would go on to lead the world in space exploration, culminating in the Apollo missions, which put humans on the Moon for the first time. The USS Nautilus, the world’s first nuclear-powered submarine, was the first vessel to reach the North Pole while submerged, another great technological achievement.

There were also a number of significant cultural events this year. The Beatles (then known as the Quarrymen) held their first recording session on July 12th. They covered Buddy Holly’s “That’ll Be the Day” and Paul McCartney and George Harrison’s “In Spite of All the Danger.” As significant as the Beatles’ first recording session was, it has been surpassed by another cultural phenomena.

Harvey Lavan “Van” Cliburn, Jr., of Texas, won the inaugural quadrennial International Tchaikovsky Piano Competition in Moscow at the age of twenty-three, amid the shadow of the Cold War. Van Cliburn performed so well that he received a standing ovation from the Soviet audience that lasted several minutes, and he returned to the United States as a hero, with a major piano competition named after him. Every four years, the Van Cliburn International Competition is conducted in Fort Worth, Texas. Van Cliburn spent the rest of his life as an ambassador of goodwill between the Soviet and American peoples, providing a ray of optimism in an otherwise tense period of history.

Continue reading to discover more about the events of 1958.