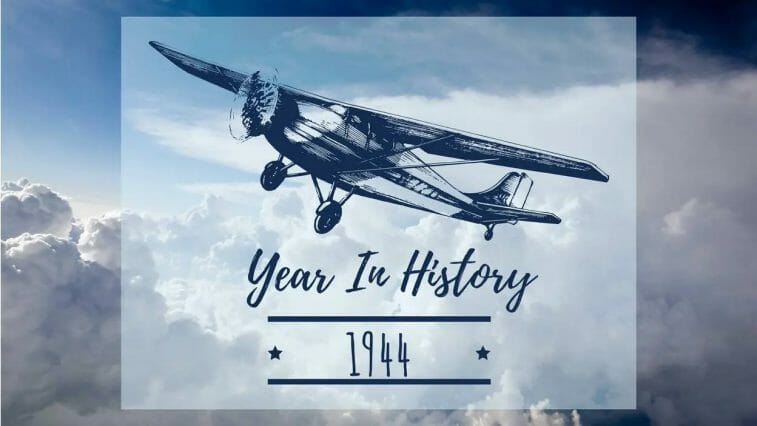 The world was thrown into disorder by World War II in 1944. German E-boats assaulted US troops training for the Normandy Landings in April. June saw the formation of the Provisional French Government and the fall of Rome, the first Axis capital to fall to the Allies. The German Navy’s Enigma Code, which had delayed Allied efforts for the majority of the war, is decrypted virtually in real time by June 5th, and British bombers attack the Normandy shore in preparation for the Normandy Landings the following day. On the 6th of June, 155,000 Allied troops land on the Normandy coast, making it the world’s greatest amphibious military operation. The Allies pushed through to Paris during the next two months, liberating the French capital and weakening Nazi Germany’s grip on Western Europe.

On March 2nd, Michael Curtiz’s Casablanca wins Best Picture at the 16th Academy Awards, and Jean-Paul Sartre’s No Exit, which includes his most famous statement, “Hell is other people,” is published in May. Tennessee Williams’ The Glass Menagerie, a well-known play, opened in Chicago in December.

The Summer Olympics in London are cancelled, and the Winter Olympics in Cortina d’Ampezzo, Northern Italy, are also cancelled due to World War II. On June 3rd, Austrian podiatrist Hans Asperger published his article on Asperger Syndrome, which described the signs of autism in detail. Friedrich Hayek, another Austrian scholar, wrote The Road to Serfdom in March, which had a huge impact on conservative and libertarian philosophy.

Continue reading to discover more about the events of 1944.