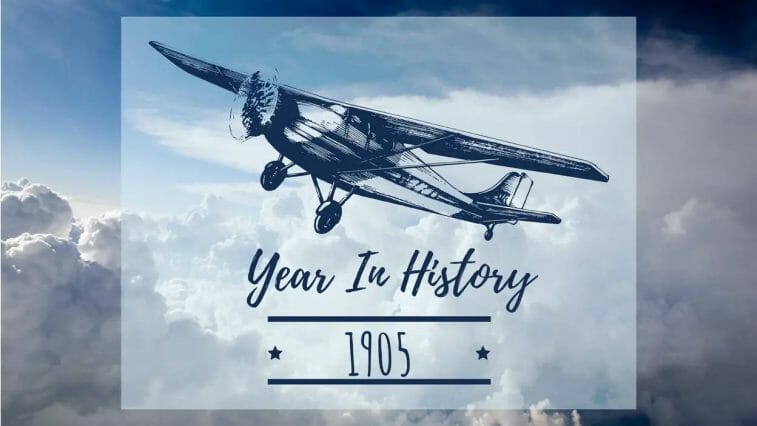 The year 1905 saw the world enter a new era just a few years after the turn of the century. It was an era of discovery and expansion, and the year hinted at even bigger things to come.

The Russo-Japanese War was one of the most important events on the world scene at the time. The conflict entered its second and last year in 1905. The Japanese triumph over the Russian Empire, which ended in September 1905 under the Treaty of Portsmouth (mediated by American President Theodore Roosevelt), astonished the world and indicated that Japan would be a force to be reckoned with for years to come in the new century. Internal dissatisfaction in Russia was intensified by the defeat, prompting Tsar Nicholas II to issue his October Manifesto, which promised political reforms, including the institution of an elected parliament.

The Canadian provinces of Alberta and Saskatchewan were formed from the existing Northwest Territories in 1905, assisting in the completion of westward development in both Canada and the United States. In the United States, 1905 was also the year that Las Vegas was founded. Norway gained independence from Sweden this year, marking yet another big political shift. Albert Einstein began working on his special theory of relativity in 1905, which was a watershed moment in the history of science.

There were some notable births and deaths in 1905. The philosopher Jean-Paul Sartre, novelist Ayn Rand, and fashion designer Christian Dior were all born in this year. However, the world lost novelist Jules Verne this year as well. Twenty Thousand Leagues Under the Sea, Journey to the Center of the Earth, and Around the World in Eighty Days are among Verne’s best-known works. Verne is usually regarded as one of the founding founders of science fiction.

Continue reading to learn more about the events of 1905.