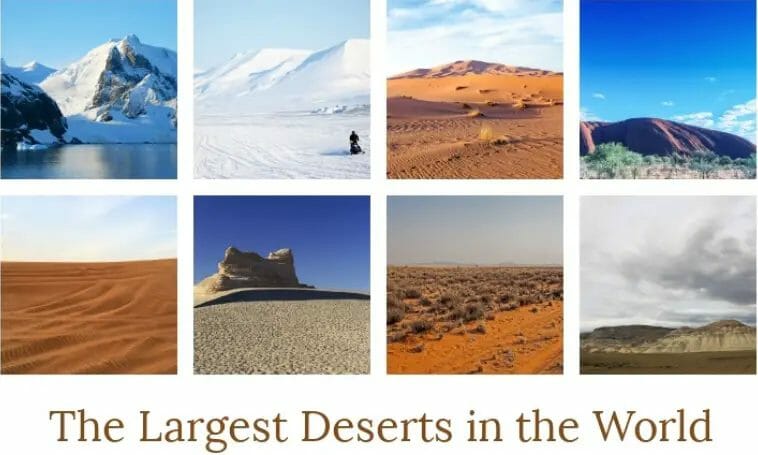 A Desert is a large area of arid territory with little or no vegetation. The area receives occasional rainfall of fewer than 25 cm per year. Deserts have a hot climate because evaporation is greater than precipitation. Because to the lack of cloud cover and humidity, scorching deserts become chilly at night. Adaptations enable desert plants and animals thrive in the harsh climate. Water is stored in desert environments to help them survive during times of drought.

The top 8 largest deserts include:

Contents for Top 8 Largest Deserts in the World

Antarctica polar desert covers the whole Antarctica continent. The desert covers 14,200,200 square km of land.  The desert is the coldest, driest and windiest desert receiving precipitation of 200mm annually.  The deepest ice sheet is 4.5km thick and has taken about 45 million years to grow that thick.

The interior of the desert rarely receives rainfall. Precipitation averages around 50 mm per year and are in the form of snow and ice crystals. The coast has a maritime climate that is influenced by the ocean and receives more than 200 mm precipitation in a year.  It’s possible to see snow, rain, and sunshine in one day in summers on the Antarctic Peninsula. 80% of the world’s freshwater is reserved in the Antarctic.

The Antarctic ice sheet, which is at least 1.6 kilometres (1 km) thick, covers around 98 percent of Antarctica. About 90% of the world’s ice (and hence 70% of the world’s fresh water) is found in this continent. The sea level would increase by around 60 metres if all of the ice in the world were to melt (200 ft).

Plant life is scarce in the Arctic due to the cold climate. Vegetation present includes moss and lichen. Animals inhabiting the arctic polar desert include Arctic fox, Arctic Wolf, Polar bear, Caribou, Snow owl, and Moose. The majority of the animals migrate between the arctic desert and the arctic tundra, which has more vegetation.

Geopolitical north poles are shared by all nations. The exclusive economic zone (EEZ) off the shores of the six Arctic states bordering the Arctic Ocean is 200 nautical miles (370 km; 230 mi). These states are Canada, the Kingdom of Denmark (including Greenland), Iceland, Norway, Russia, and the United States.

As the world’s largest scorching desert, the Sahara Desert can be found in Northern Africa. Some of the places where it can be found include: Egypt; Algeria; Libya; Morocco; Tunisia; Sudan; Western Sahara; Mauritania; Mali; Niger; Eritrea; and Chad. The desert covers a total area of 9.2 million km2. It runs from the Red Sea to the Mediterranean, the Atlantic Ocean to the west, and the Sahel to the south. Around the Niger River basin, the Sahel is a semi-arid tropical savanna. .

The Sahara is a subtropical desert and receives minimal rainfall annually. It is believed that the desert alternates between a desert and savanna grassland every 20,000 years. Recently the amount of rainfall received annually has greatly increased. Sahara receives a mean rainfall of between 100 to 250 millimeters. The stability of the desert atmosphere prevents convective overturning, thus the lack of rainfall. The weather remains sunny and dry. The average temperature exceeds 40 degrees during the hotter months. Sand and ground temperatures are more extreme as they can rise up to 80 degrees Celsius. Lac of cloud cover and low humidity in the desert causes high diurnal temperature variations.

The Great Desert is the world’s hottest big region and, in certain places, the hottest place on Earth during summer due to factors such as the Sun’s high altitude, extremely low relative humidity, and a lack of flora and water.

Desert areas in Australia can be found all over the western plateau and the interior lowlands. More over one-fifth of Australia’s landmass is covered by desert. Australia is home to a total of ten deserts. In terms of area, the Great Victoria Desert covers around 348,750 km2, whereas the Pedirka Desert is about 1,250 km2.

One of the world’s largest longitudinal dune deserts is the Simpson Desert in Australia. Some of the dunes span from the south-east to the north-west for 200 kilometres. There are 1100 sand dunes here. The dunes are towering over the landscape, up to 90m high. In Australia, the desert plants have found numerous strategies to cope with their harsh conditions.

The Arabian Desert is a subtropical desert in Western Asia and encompasses most of the Arabian Peninsula. The Arabian Desert is found within nine countries, namely, Jordan, Iraq, Omar, Qatar, Kuwait, Saudi Arabia, Yemen, Israel, and the United Arab Emirates. The desert surface area I 716,400 square kilometers.

Mean annual rainfall averages at 100 mm and 30 to 40 mm in the driest areas. The temperatures are consistently hot, and rain is sparse in the Arabian desert. Average temperatures in the desert are above 40 degrees Celsius and can go up to 48degrees in low elevation areas. The Rub’ al Khali, also known as the Empty Quarter, the largest uninterrupted body of sand in the world, lies at the southern end of the desert.

Animals that inhabit the Arabian desert include the Arabian camel, Arabian wolf, Nubian Ibex, caracal, striped hyena, sand gazelle, and the red fox. The desert is an ideal environment for reptiles such as lizards, geckos, and snakes. The desert harbors about 900 species of plants.

Gobi Desert is home to animals such as the Bactrian camel, Black-tailed gazelle, Gobi bear, Gobi Ibex, and the snow leopard. There is sparse vegetation in the Gobi Desert. The most common plants in the Gobi Desert are the Saxaul tree which is adapted to retain moisture within its bark.

Many major fossil discoveries have been made in the Gobi Desert, including the earliest dinosaur eggs, which were discovered in 1923 and averaged 9 inches (23 cm) in length.

Southern Africa’s Kalahari Desert is a subtropical desert. Botswana, Namibia, and South Africa share the desert. The desert is about 900,000 square kilometres in size. The Kalahari Desert is sub-humid in the north and east, and semi-desert in the west and south. The typical yearly temperature is 18 to 40 degrees Celsius, with a wet season in the summer.

Native plants in the Kalahari Desert include acacia trees, kiwano fruits, melano, African horned cucumber, jelly melon as well as several herbs and grasses. The desert is also home to many migratory birds and animals: such include lions, cheetahs, elephants, giraffes, among others.

For 20,000 years, the San people of the Kalahari have been living off the land as hunters and gatherers. These people use poison arrows and bows to hunt wild game, and they gather berries, melons, nuts, and insects as well as other food plants.

This desert is the biggest cold desert in Argentina with an estimated area of about 673,000 kilometers squared. The desert is bounded by the Andes Mountains to the west and the Atlantic Ocean to the east. Patagonia is divided into eastern Patagonia, western Patagonia, and Tierra del Fuego.

Temperatures in Patagonia averages at 3 degrees Celsius and rarely exceed 12 degrees Celsius. The desert experiences seven months of winter and five months of summer. There are constant and strong winds from the west.

Most of the animals in the Patagonian desert live in the outskirts of the desert, where there is more abundant food and a less hostile environment.  Animals in the Patagonian include the lesser rhea, guanaco, tuco-tuco, western ribbon snake, Patagonian weasel, desert iguana, burrowing owl, and numerous eagle and hawk species. Common vegetation includes shrubs like Acantholippia and Benthamiella and tuft grasses like Stipa and Poa.

Located in the rain shadow of the Andes, South America’s Patagonia is a frigid desert with a large portion in Argentina. It receives little to no precipitation and is a cold and dry environment.