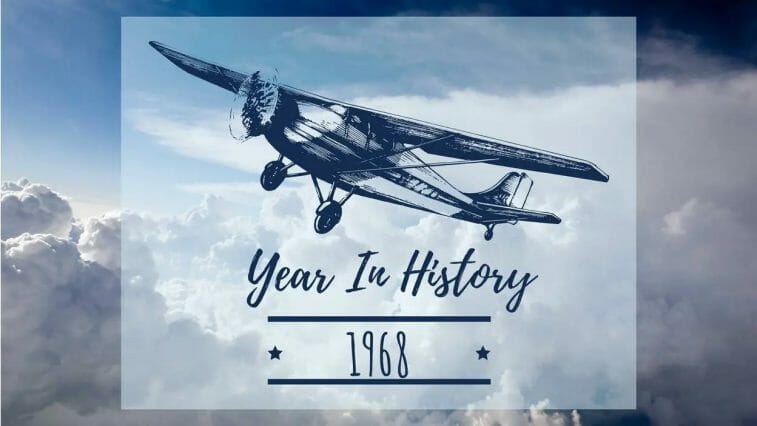 1968 was a year of great upheaval. The times, as Bob Dylan put it, were a-changing. Despite the major political upheavals, there were a few cultural developments that would have a long-term impact on the world.

The first episode of Mister Rogers’ Neighborhood aired in 1968, giving generations of children with a solid, comforting cultural symbol. Planet of the Apes, starring Charlton Heston, was also released in theatres that year. In October of this year, Led Zeppelin, one of the greatest bands of the twentieth century, performed live for the first time. Yale University announced this year that women will be admitted to the university, making it a coeducational institution for the first time.

This was a crucial year for space exploration as well. The United States launched Apollo 7, the first manned Apollo mission, in 1968, marking a significant step toward a Moon landing. Not long after, Apollo 8 orbited the Moon, with astronauts Frank Borman, James Lovell, and William A. Anders. These men were the first humans to observe the Moon’s dark side.

The deaths of two important political personalities in the United States, Martin Luther King, Jr. and Robert F. Kennedy, will be remembered most vividly in 1968. On April 4th, Martin Luther King, Jr., a prominent civil rights leader in the United States, was assassinated at the Lorraine Motel in Memphis, Tennessee. In addition to the national grief, King’s assassination provoked widespread civil unrest in an already volatile situation.

Robert F. Kennedy, the brother of killed President John F. Kennedy, was a United States Senator from New York and a Democratic presidential candidate. On the evening of June 5th, Kennedy was shot while campaigning for his party’s candidacy in Los Angeles, California. On June 6th, he died of his wounds.

Continue reading to discover more about the events of 1968.