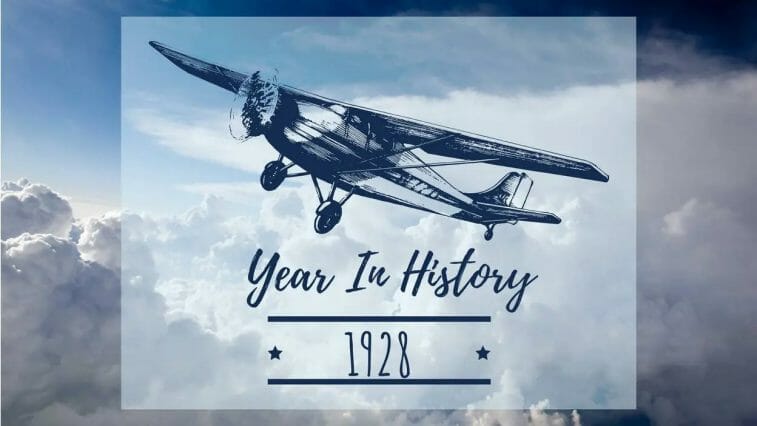 The year 1928 was one of humanity’s most remarkable years. Frederick Griffith of England submitted a study in January that demonstrated the presence of DNA, marking a watershed moment in science.
Year after year, this finding continues to deliver a slew of scientific breakthroughs.

On February 8, a transatlantic television signal was beamed from London to New York City by John Baird of Scotland, making the world a far more integrated place. This paved the door for journalists to transmit news from around the world and, later, for consumers to watch entertainment content from other countries. Baird would go on to demonstrate the world’s first colour television transmission later that year, in July.

This was also a significant year in the realm of aeronautics. The Medal of Honor was presented to American aviator Charles Lindbergh in March in recognition of his remarkable transatlantic trip.
Amelia Earhart, an aviator, became the first woman to fly across the Atlantic in June of this year, though she did so as a passenger rather than a pilot.

On the international political stage, there were also some significant developments. When Leon Trotsky was expelled from Soviet territory in January, a serious internal schism in Soviet political circles erupted. Trotsky was a leading Marxist theorist, politician, and Red Army creator. He was also a prominent rival of Joseph Stalin, who exiled him for his anti-Stalin activities.

The Kellogg-Briand Pact, a significant pact, was also signed this year. This was the first international treaty to declare aggression warfare illegal under international law. While this pact would not, of course, fulfil its goals, it is nonetheless significant because it constituted a big step forward in world peace efforts. Conflicts were to be settled first through negotiation, bringing signatories closer to putting classic Western concepts of “just war theory” into practise.

Continue reading to discover more about the events of 1928.