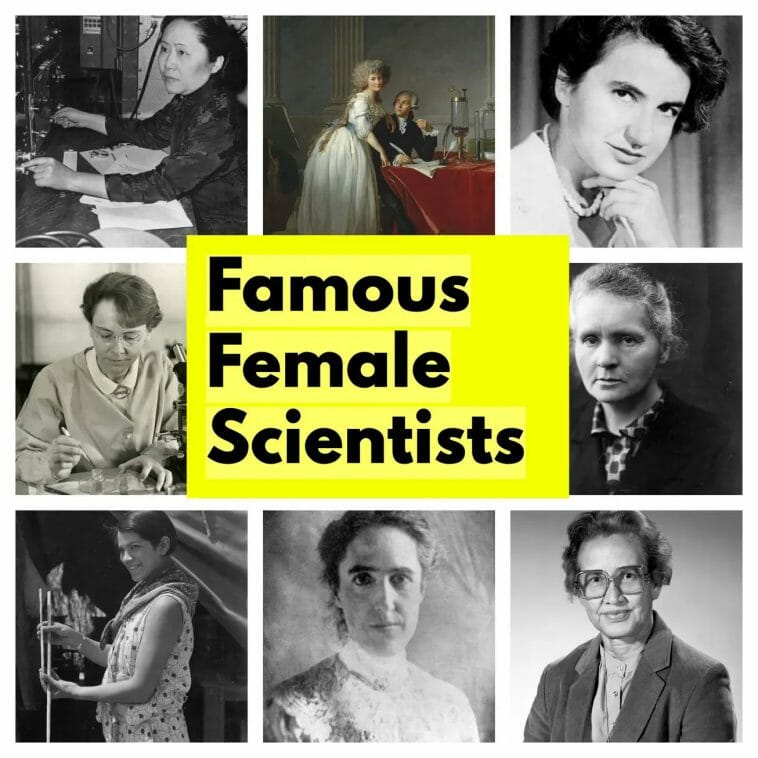 Here are some well-known female scientists who have made significant contributions to their respective professions. These ladies represent only a small percentage of the world’s successful female scientists.

Contents for Top 10 Famous Female Scientists of All Time

For the time being, Marie Curie is the only scientist to have won Nobel Prizes in two scientific fields simultaneously. When Curie finished her studies at the Sorbonne, she started her own laboratory to research radiation.

Polonium and radium were discovered by Curie following the discovery of radioactivity in 1896. Also, she devised a way to isolate the radium for further study. The Nobel Prize in physics was awarded to Curie in 1903 for her research into spontaneous radiation. During her work on radioactivity, Curie won a second Nobel Prize in 1911. It was thanks to Curie’s work on X-rays and uranium that the subject of atomic physics was established. Curie died of radiation exposure in 1934, after dealing with radioactive elements for many years.

Marie-Anne Paulze Lavoisier, sometimes known as the “Mother of Modern Chemistry,” transformed science alongside her husband, Antoine. Even though Antoine gained much of the credit in the 18th century, Lavoisier was instrumental in chemical experiments and publications.

She meticulously recorded her and her husband’s scientific studies, making comprehensive drawings so that others might reproduce the results. When Antoine and English chemist Joseph Priestley disputed the nature of oxygen, Lavoisier translated Priestley’s articles for her husband.

Henrietta Swan Leavitt, who went deaf after a college sickness, volunteered to serve at the Harvard College Observatory in 1895. Director Charles Pickering waited seven years to grant Leavitt a pay — 30 cents per hour — and the Radcliffe College graduate finally rose to become the head of the observatory’s photographic photometry section.

Leavitt produced ground-breaking astronomical discoveries, including the discovery of nearly 2,400 variable stars. Her study helped Leavitt discover the relationship between a star’s brightness and its distance from Earth by doubling the current knowledge about these stars. Edwin Hubble concluded that the cosmos was expanding as a result of her discovery.

Cody showed an early interest in the scientific study when she aided her uncle in archaeological excavations after relocating to Nevada as a young adult. Cody wrote several research articles throughout the years, and in 1929, she made a groundbreaking discovery of a Pueblo site she dubbed “Scorpion Hill.” Cody was a trustee for the Southwest Museum from the 1950s through the 1970s. She also co-hosted a TV show with her famous actor husband, Iron Eyes Cody, on Native American legends.

In the 1950s, scientists were driven by the race to find the structure of DNA, but all the credit goes to one woman, Rosalind Franklin. She proved the use of the instrument for uncovering the double helix of DNA. Franklin worked on X-ray crystallography after receiving his PhD in physical chemistry from Cambridge University. She used a machine she developed after 100 hours of X-ray exposure to effectively image the structure of DNA.

Without Franklin’s consent, her colleague Maurice Wilkins gave the image to James Watson and Francis Crick. “My jaw fell open and my heart began to beat,” Watson recalled when he viewed the photo. Watson and Crick utilised Franklin’s research to publish a groundbreaking paper in the magazine Nature in 1953, which earned them the Nobel Prize, which they shared with Wilkins. Franklin, however, died at the age of 37 without being recognised for her contributions to science.

Alice Ball, who was a  pioneering Black scientist in the early twentieth century, changed leprosy therapy. Ball was included in the list of first female chemistry instructors in the United States after receiving graduate degrees from the University of Washington and the University of Hawaii.

Ball studied leprosy therapies in the laboratory. She created the first injectable leprosy therapy from the oil of the chaulmoogra tree in her early twenties. Thousands of leprosy patients were treated with the “Ball Method” until the introduction of sulfone medicines decades later.

Chien-Shiung Wu was a physicist who was the first to show that the concept of parity conservation does not apply to beta decay.

Wu was born and reared in a tiny village north of Shanghai, where she had the good fortune of receiving a formal education, which was unusual for girls at the time. Wu earned a physics degree from Nanking’s National Central University (now known as Nanjing University) in 1934. She opted to continue her studies in the United States after being persuaded by a female mentor and went on to receive a PhD in physics from the University of California, Berkeley.

We stayed in the United States to teach university-level physics classes at Smith College and Princeton University, where she was the department’s first female professor. She also volunteered for the Manhattan Project, where she contributed to the advancement of atomic physics.

Geneticists agreed in the mid-twentieth century that genes were fixed in place and did not migrate. Barbara McClintock, on the other hand, debunked this idea with her maize study.

McClintock began researching genetic transposition in the late 1920s, which was a revolutionary notion at the time. Then, in the 1940s and 1950s, she expanded on her research to show that genes could turn physical traits on or off. McClintock was met with suspicion for questioning existing molecular biology concepts, prompting her to withhold part of her findings from publication.

After winning a Nobel prize in 1983, McClintock told that she has rather appreciated not has she ever explained her readings throughout the years and that she has never felt compelled or compelled to defend her beliefs. She won this award because of her discovery to explain the fact that genes can move around on chromosomes.

Katherine Johnson, a West Virginia native, is most known for her work as a “computer” at NASA. Our journey to the moon and beyond space would not have been possible without her mathematical prowess.  As a child, Johnson had a strong interest in math and numbers. She was also a rapid learner, starting high school at the age of 10 and college at the age of 15.

It took Johnson more than a decade after getting her mathematics degree to hear that NASA was looking for Black “computers” – highly talented mathematicians who could perform and solve challenging math problems. When NASA successfully launched people into space back in the 1960s, they relied on Johnson’s formulas.

Maria Sibylla Merian made significant contributions to botany and zoology. She gathered and studied live moths, butterflies, and other insects in the 1670s to compile an illustrated inventory of European insects. Merian contributed vitality to the study of zoology by working from living rather than preserved specimens.

Merian moved to South America with her daughter to pursue her studies after releasing numerous illustrated books. Merian researched indigenous animals and plants in their native habitats in the Dutch colony of Suriname. Merian defied societal conventions by travelling without a male partner and doing scientific study from life.