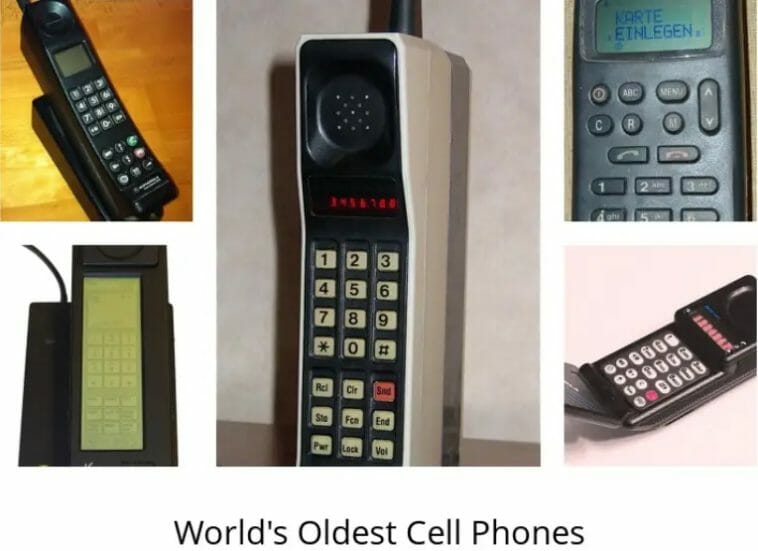 Smartphones have swept the globe in the last two decades. Their daily use is embraced by countless numbers of people. In the early 1900s, phone companies began to investigate wireless technology, which eventually led to the development of cellular/mobile phones. However, what were the original cell phones that got things started? Let us reminisce about the evolution of cell phones.

Contents for 7 Oldest Mobile Phones in the World

On April 3, 1973, Motorola’s Martin Cooper, a senior engineer, called a competitor telecoms company and informed them he was speaking on a mobile phone. This was the world’s first mobile phone call. The Motorola DynaTAC 8000X was Motorola’s first commercial mobile phone when it was debuted in 1983. The phone could store 30 phone numbers and had a conversation time of 30 minutes. It also had a standby time of six hours.

It was called “the brick phone” by users because of its size and weight, which were both similar to a conventional clay-fired brick. The phrase was then given to other brands in contrast with the smaller handsets of the 1990s.

The Motorola MicroTAC is a cell phone that was first released in 1989 in analogue form. The MicroTAC offered a new “flip” design, where the “mouthpiece” folded over the keypad, although later production the “mouthpiece” was really housed in the base of the phone, along with the ringer. This raised the bar high and served as a model for all subsequent flip phones. The MicroTAC was replaced by the Motorola StarTAC in 1996 after several iterations by Motorola.

Only MicroTAC phones from the early 9800X era had a microphone and ringer built into the mouthpiece for communication. All other models housed these parts inside the phone’s main body instead.

When the International 3200 was introduced in 1983, it served as a direct replacement for the analogue cell phones that had been available since the late 1960s and early 1970s. GSM technology in the 3200 allows it to work on any existing 900 MHz GSM network (not with 3G SIMs).

To far, only one commercial mobile phone model has been released for sale: the Nokia 1011. The Nokia 1011 was the world’s first mass-produced GSM phone. The Nokia 1011 was a little phone by today’s standards, and it could easily be carried around in a wallet or pocket. For the next few years, this was the only commercial cell phone that could send and receive text messages.

As the first mass-produced mobile phone, the Nokia 1011 was a significant milestone. It was initially released in November 1992 and had a storage capacity of 99 numbers. The Nokia 1011 was the world’s first SMS-capable phone because it could send and receive SMS messages.

International Business Machines (IBM) designed and manufactured the IBM Simon Personal Communicator (often referred to as IBM Simon). In retrospect, despite the fact that the term “smartphone” was not coined until 1995, Simon is considered the first true smartphone due to its features and capabilities.

As well as sending and receiving cellular phone calls, Simon had the capacity to send and receive faxes, emails, and cellular pages as well. One of Simon’s numerous features was the ability to use the electronic notepad as an address book and calendar as well as a stylus input screen keyboard to record handwritten remarks and use a world time clock.

In 1994, the Hagenuk MT-2000 was introduced as a mobile phone. Hagenuk’s Stvring, Denmark, development centre came up with the concept and built the device. With its predecessor Hagenuk MT-900, the phone was one of the first in the industry to have Soft keys. For the first time, the MT-2000 had an antenna incorporated into the device, rather than relying on external antennae. It was formerly thought that it was the first smartphone to have a video game, but it was really the third – the first two were the Siemens S1 (hidden Tetris – named “Klotz” here) and the IBM Simon (Scramble). A physical button for volume up and down and power on/off was included in both versions of the phone that were made.

Hagenuk was one of the first to enter the GSM phone market. Although Hagenuk beat Nokia by three years in getting a game of Tetris, their first GSM mobile, the MT-900, received official type clearance only four weeks after Nokia received type permission for their first GSM hand portable (the 1011).

The Motorola StarTAC, which was first released on January 3, 1996, is widely regarded as the first clamshell (flip) phone. The MicroTAC, a semi-clamshell design introduced in 1989, was succeeded by the StarTAC. The StarTAC’s flip folded up from above the display, whereas the MicroTAC’s did so from below the keypad.PC World ranked the StarTAC as the sixth greatest gadget in the last 50 years in 2005. The StarTAC was one of the first cellphones to achieve substantial consumer adoption, with around 60 million units sold. StarTAC was resurrected in 2004 and 2007 for a series of flip phones sold only in some Asian regions, as well as for a cordless phone.

The StarTAC was popular until the early 2000s, and it was used in several Hollywood films of the time, including 8mm, starring Nicolas Cage. The StarTAC has a cult following among enthusiasts and vintage mobile phone collectors due to its popularity. Many versions can still be utilised today, despite their age, in areas where cellular providers still offer a compatible network. This is mostly confined to GSM models that operate on the 2G network.