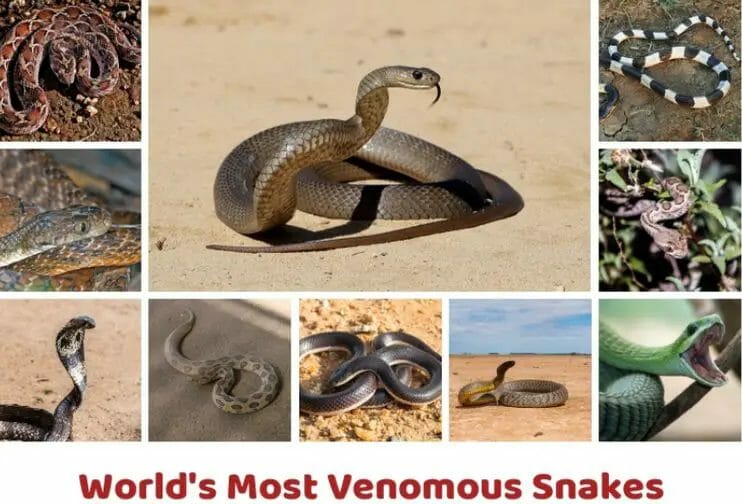 Are you interested in finding out about the most venomous snakes in the world? According to the latest data released by the World Health Organization, there are more than 600 species of venomous snakes across the globe. However, there are around 200 species that can cause severe damage to human beings. There are different ways of understanding to what extent the snake is venomous, and therefore, it is also good to know the criteria used. Some lists of the most venomous snakes define it by the strong dose of venom needed to kill either a mouse or a person, while others look at how many humans or mice can be killed by one bite from a snake.

Other lists look at how many humans have been killed by a specific snake bite in a year or what percentage have been killed by these snakes after being left untreated. Therefore, these factors are all important and should always be put into consideration when deciding on the most venomous ones.

Some of the most poisonous species include:

Contents for The Most Venomous Snakes in the World

This snake ranks as the most poisonous snake, and many researchers have listed it as the deadliest compared to the rest. Approximately 100 mg of the venom from this snake is enough to kill about 100 adults. A single bite can inject 100 mg of venom into the body. They have very fast venom that takes effect in under one hour. This snake has a venom that is one of the most powerful toxins ever found by science.

In Australia, eastern brown snakes are responsible for more deaths than any other snake species. They are mostly found near human settlements and come in a variety of colours ranging from grey to black or brown.These snakes are among the most venomous snakes in the world, and some show that they are the most venomous. The venom from this snake is very hemotoxic. They have a venom that quickly attacks the blood and ends up preventing clotting. The bites from the eastern brown snake cause internal bleeding, kidney damage, or in other cases, neurotoxic paralysis. These snakes mainly use their venom for hunting by killing reptiles, mammals, amphibians, and birds.

The mainland tiger snake also ranks among the most venomous snakes in the world, and they are mainly found in Australia. On Australia’s Southeastern and Southwestern Coasts, they are mostly found in moist regions near residences.. The venom that they contain usually affects the nervous system, muscles, and blood clotting proteins. Their venom is very effective in killing birds, amphibians, reptiles, and mammals. When they are threatened, they flatten their necks and create a hood like a cobra. These snakes have bands that look like tiger stripes, and that is where the name was derived from. These bands come in a variety of colours, including black, yellow, bronze and tan.

This snake is mainly found in Asia, and it is ranked as one of the most venomous. Despite their extensive distribution, you can find them from western India all the way to eastern China. In some countries, especially Asia, the snake is responsible for more bites than any other snake species. They have a unique pattern, and this makes it easy to identify them. They hiss very loudly whenever they are threatened, but if the hissing does not work, they will end up biting. The venom that is contained in these snakes is very toxic, and they also have a large amount of venom. It is estimated that this snake species contains enough venom to kill approximately 150, 000 mice. The preferred prey of Russell’s Vipers are rodents, and they kill them in seconds.

This is the most venomous snake in the Colubrid family. The venom of this snake is not as strong and dangerous as that of some of the snakes on this list, but the family of Colubrid ranks first. The venom they release causes extensive bleeding and hemorrhaging. This snake has the capacity to kill humans by the use of its venom, but due to their prepositioned fangs, it becomes harder for them to inject the venom compared to other species.

These snakes do not like confrontation, and they will avoid it by all means. Whenever they feel threatened, they will inflate their throats to make themselves seem bigger. The Boomslangs are tree-dwelling snakes, and they are always alert. They mainly feed on birds and lizards, which they grab and hold onto as they wait for the venom to take effect. They have keeled scales with different patterns and colors, which include gray, black, brown, and green.

Most people consider the Malayan Krait, or Blue Krait, one of the most poisonous snakes in Asia. Despite the medical treatment, approximately half of the bites from this snake are fatal. The venom contains fatal neurotoxins that cause paralysis and death, which occurs due to respiratory failure. This species is nocturnal, and they prefer living in the forest away from humans. The most interesting part about these snakes is the fact that they are very friendly and easygoing during the day, and they mostly feed on other dangerous snakes. They have thin bodies that have gray, white, or tan-colored bands.

The Mojave rattlesnake is one of the many rattlesnakes found in the United States. It is the most venomous rattlesnake. The venom varies depending on the subspecies, and it can be either neurotoxic or hemotoxic. This means it can affect both the nervous system and the blood. They prey on birds, reptiles, mammals, and amphibians. Whenever they feel threatened, they resort to biting, but their bites are not fatal in most cases, but they cause very serious snake bites around the Southwest United States.

This snake may not be the most venomous, but it is definitely among the most venomous snakes in the world. They are easily irritable and aggressive. Due to their temperament, these snakes are among the leading causes of snake bites in India. They have venom that is similar to other vipers, and it affects blood clotting and destroys tissues. The bites are life-threatening and should therefore be treated using anti-venom as soon as possible. Apart from defense, they use their venom for hunting animals such as reptiles, amphibians, mammals, and small snakes. They can be found in brown, tan, and mahogany colors. They hide inside and leave just their heads visible, which makes it hard to spot them. Whenever you approach them, they will make a loud, rasping sound as if they are rubbing their scales together.

This is the longest venomous snake species in the world, with an average length of 15 feet. Whenever they feel threatened, they flatten their neck into a hood and lift part of their body off the ground. A large cobra can be at a high level with a human being. These snakes produce a very dangerous venom, but due to their large size, they can end up injecting more venom than other snakes, and they can easily overpower anything they get hold of. However, there are not many cases of attacks on humans since they prefer living deep in the forest. They mainly feed on other dangerous snakes. They have an interesting reproductive strategy, and whenever the female lays eggs, they both guard the nest.

This is a small, burrowing snake that is very toxic. They have extremely toxic venom, but luckily, they do not inject much of it whenever they bite. Their venom can cause artery damage and local tissue damage. It is extremely difficult to handle these snakes safely. They are also known as “side-stabbing snakes” as a result of their large fangs, which come out of the sides of their mouth. Due to these fangs, they cannot strike forward.