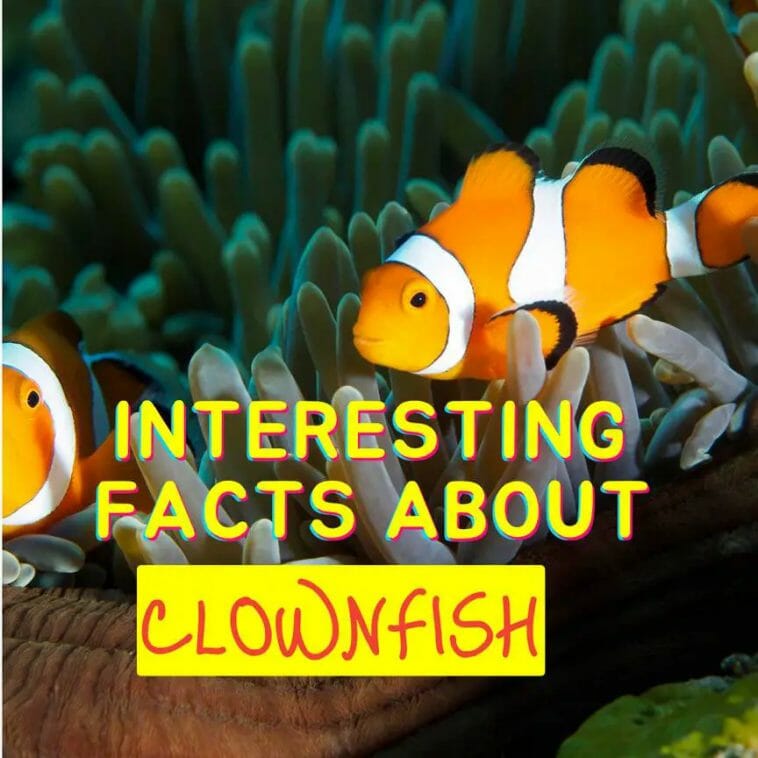 Clownfish are widely recognized as one of the most beautiful fish in the ocean. Their brilliant colors, expressive faces, and happy behavior make them some of the most popular fish in aquaria. Clownfish live in tropical reefs, and they come in a wide variety of shapes and sizes. These fish are social by nature, like many other tropical reef fish. They live in pairs, families, and small communities. Find out some interesting facts about clownfish in this article.

Contents for Amazing Facts about Clownfish

1: What is special about a clown fish?

Clownfish, often known as anemone fish, have a variety of unique characteristics in addition to appearing in the film “Finding Nemo.” Clownfish and sea anemones share a symbiotic connection (one in which both species benefit). Clownfish have a mucus covering on their body that protects them from the toxins that anemones use to catch victims. The anemone protects the clownfish from predators, while the clownfish reciprocates by removing parasites and repelling invaders.

2: What are some physical features about a clownfish?

Clownfish have a perch-like body form, with an oval body that is laterally compressed and has an interrupted lateral line. Their bodies are a bright orange colour with three white bars, the middle of which has a forward protrusion in the centre.

The orange and white parts of the body are separated by thick black bands surrounding the white bars. The bands on the flanks of the fish range from a thick line to spots of black. This species’ fins have black tips.

3: what kind of food do clownfish eat?

Clownfish are omnivores. They eat a lot of small zooplankton from the water, like copepods and tunicate larvae, but they also eat algae. They also devour bottom-dwelling invertebrates and algae. Some of the time, they will bite on the tentacles of their hosts, the anemones in their native habitat.

4: Why do clownfish not get stung by anemones?

Some experts believe that the mucus coating that covers the body of a clownfish has a unique biochemical makeup that protects the fish from the anemone’s stinging cells, known as nematocysts. Because the anemone’s chemical composition prevents it from recognising the fish as a food source, it does not fire its nematocysts.

According to some researchers, the mucus bears the same chemical signature as the host anemone, which prevents the stinging cells from firing. When a clownfish leaves its host for an extended period of time, it must re-acclimate to the host’s stinging cells. To accomplish this, the fish performs an intricate dance-like rite before returning to the host. Only its ventral fins, then its entire body, hesitantly contact the anemone’s tentacles. It takes many hours to become acclimated.

An olfactory (smell) stimulus imprinted during egg incubation is thought to be responsible for juvenile clownfishes’ capacity to locate the same host anemones as their parents. The eggs are laid in a nest near to the host anemone. Imprinting takes place when the anemone’s oral disc and tentacles are exposed to the odour of mucus from the host species. At this point, visual recognition isn’t thought to play a role in identifying the host anemone.

5: Are clownfish safe to eat?

Clownfish cannot and should not be eaten. The mucus covering they make hasn’t been thoroughly investigated to see whether it’s safe for human consumption. They are safe from natural predators like bigger fish and eels because they have a thick layer of slime that is deadly. It also protects them from the anemones they dwell in’s electric shocks.

Clownfish should not be eaten, and they are not cultivated for food in any part of the world. Clownfish farms, on the other hand, are available for sale in pet stores or for private ownership.

6: Will clown fish eat their eggs?

The male clownfish tends to the nest of eggs closely as a natural and arguably advantageous activity, fanning the eggs with his fins and rasping them clean with his lips, keeping water flowing in between and around the eggs, keeping fungi and predators at bay.

Clownfish will consume any eggs that are infertile, damaged, fungus-infested, or otherwise unviable. This serves to protect the other eggs from germs and fungus that grows on the unviable ones. They may consume all of their eggs during their first few spawnings.

7: Are clownfish poisonous to humans?

Clownfish are non-poisonous and do not pose a threat to people. Clownfish produce a mucus layer to shield themselves from the anemone’s poisoned tentacles; however, this barrier has no effect on humans. If you touch it, this protective coating will be removed, leaving it open to anemone stings.

8: Why do they call it clownfish?

Clownfish are named for its brilliant orange colours and white stripes, as well as their bouncy swimming style. Clownfish are territorial, energetic fish with unpredictable swimming patterns that appear to execute acrobatics while defending the space around their anemone. Because of this habit, as well as their colourful coloration, they were given the nickname clownfish.

9: Are clownfish born male or female?

Surprisingly, all clownfish are born male. They have the ability to alter their gender, but will only do so if they want to be the dominant female in a group. There is no turning back once a male clownfish transforms into a female. Then it will always be female.

10: How long can clownfish live?

A clownfish in the wild can survive for up to ten years, according to research. Clownfish grown in captivity have a longer lifespan than those caught in the wild because they haven’t been subjected to the stress of capture and transportation. With proper care, certain species can survive much longer: a short look at aquarium forums reveals many aquarists who have had their clowns for as long as 20-30 years.

11: How old is the oldest clown fish?

The oldest clownfish (Amphiprion ocellaris) were found to be over 20 years old, according to the findings of a survey of public aquariums in Europe. Even though they were old, they were still able to reproduce often, which meant that they were not nearing the end of their natural lives.

12: How can you tell how old a clownfish is?

You can’t determine how old a clownfish is, whether it’s a juvenile or an adult. Additionally, there is no specific age at which they reach sexual maturity. They will mature when no male or female is present.

Clownfish can reach a maximum size of 11 cm (4.3 in), while the usual size is 8 cm (3.15 in). Depending on the species, clownfish can grow to be between 2 and 5 inches long. The Maroon clownfish, for example, is an exception, growing up to 6.7 inches in length. Males are often much smaller than females.

14: How can you distinguish between male and female clownfish?

Female clownfish are significantly larger and more dominant than male clownfish. Clownfish are all born male and live in schools commanded by a dominant female. When the dominant female dies, the second-largest fish matures into a female to take her position. Sometimes two males mate, and the larger fish becomes a female. Once the transformation occurs, it is irreversible.

15: How do clownfish reproduce?

The male clownfish prepares the nest when the mother clownfish is ready to lay her eggs, which is determined by moon cycles. Depending on the species, females can lay 1,000 eggs in a single spawning episode. The father watches over the eggs after she has laid them, fanning them, and cleans up the area. The larvae are translucent when they first hatch and only develop their distinctive bright colours as they get older.

16: What are some interesting facts about clownfish?